Oil prices are heading higher on the chart with the cash West Texas Intermediate (WTI) crude rallying back toward the $100.00 level after threatening to test $90.00.

Steady economic signs in the United States, China, and Japan -- the three largest economies in the world -- along with some muted growth in the eurozone and Europe are adding some spark to the oil futures.... But hold on; doesn’t the buying seem somewhat premature? I’d say so, as I believe oil prices may have limited upside unless something dramatic surfaces in the Middle East that impacts OPEC oil.
More...
Please share this article
at 12:06 AM No comments: Links to this post

Qiwi (NASDAQ: QIWI): This 170% IPO Winner Still Has Plenty of Room to Run 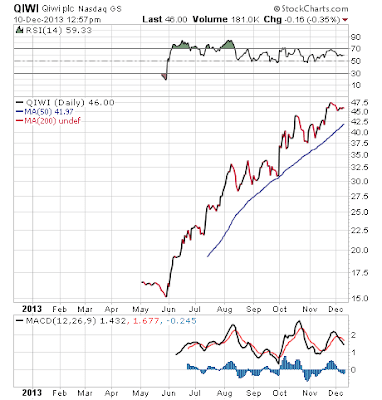 The year is almost over, and two things we can say about the market in 2013 is that stocks demonstrated stellar performance (the S&P 500 is more than 26% year to date), and it was a great year for the IPO market.

According to research firm Dealogic, in the first 11 months of 2013, there were 218 companies that were brought to market via IPO. Those deals raised some $56 billion, which was the most since 2007, when a total of 288 IPOs generated $63 billion.

Sure, there was the high-profile tech IPO winner Twitter (NYSE: TWTR), and the well-known retailer The Container Store (NYSE: TCS), and both stocks are up nicely since their respective debuts, gaining 15% and 11%, respectively.  (more)

Rob McEwen: “Our [Currency] Is Being Debased, And One Needs To Protect Their Capital”

I had the great opportunity recently to reconnect with the founder and former CEO of Goldcorp, Rob McEwen. He is now the Chairman and Chief Owner of McEwen Mining.
It was an interesting discussion, as Rob indicated we are very close to a significant turnaround in both metals and mining shares, to which the speed of recovery coming out of this bear market, will be absolutely dramatic.
Starting out with an expected catalyst for recovery of the mining sector, Rob said, “The next run in this market is going to be [driven by] gold moving higher…You look at the broad market right now. The stock market is quite high at the moment and on a relative basis, gold is very cheap. So I think some investors will be looking at relative value situations and saying, ‘Maybe I should have some gold in my portfolio now.‘ It’s off quite a bit from its highs, and I still believe our monetary base is being debased and one needs to protect their capital…[so for that reason] I don’t think there’s much more on the downside in gold—maybe five percent.”

Over the last few months I’ve noticed a larger number of market participants interested in our old friend: the Advance/Decline line. I found that it was being used quite often as one reason to stay long and bullish since it was hitting new highs along with the major US stock market averages. If you don’t know, the A/D line is a measure of stock market breadth based on cumulative net advances. In other words, it takes the number of advancing stocks on the NYSE on a given day and subtracts the number of declining stocks. That number is then added to the previous day’s value, which creates the “line”.
While some have used this particular measure of breadth as “confirmation” of the uptrend in stocks, I’ve been pointing to another measure which has been diverging dramatically in the second half of the year. This is of course the Percentage of stocks trading above their 200 day moving average (or “in uptrends”) making lower highs with each new high in the market. But that’s not what today is about. You can go here if you want to read more about that one. Today is about that other measure of market breadth, the Advance/Decline line, specifically the NYSE Advance/Decline line.
Here’s a chart of what it looks like: 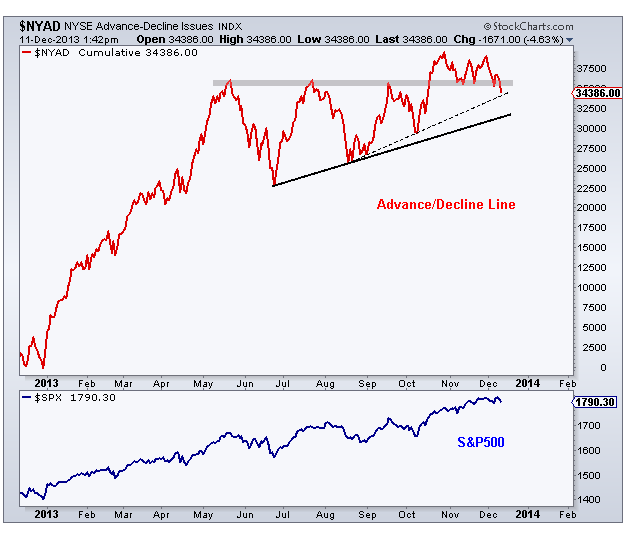 We can start by pointing to the fact that the new all-time highs we’ve been seeing since last month have not been confirmed by breadth. You can see that better in this chart: (more)
Please share this article
at 12:03 AM No comments: Links to this post


About this week’s show:
-The massive ongoing QE is not working
-Consequence of QE will bring severe distortion
-U.S. Economy must fix basic structural flaws
-You must read: Confessions of a Quantitative Easer