kingworldnews.com / February 17, 2014
Today a 42-year market veteran who predicted the spike in gold ahead of time spoke with King World Newsabout the explosive action in gold.  Now that the rally he predicted is unfolding, John Hathaway, who is one of the most respected institutional minds in the world today when it comes to gold, and whose fund was awarded a coveted 5-star rating, also said investors need to strap themselves in for a COMEX default and a surge in the gold price.
Hathaway:  “Right now the price action in gold and silver is telling the story.  One thing that has surprised me is that the equity markets have seemed to hold together with all of the bad economic news….
READ MORE
Please share this article
at 12:05 AM No comments: 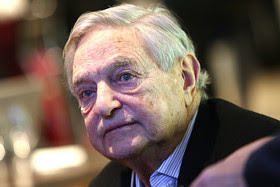 Soros Fund Management has doubled up a bet that the S&P 500 SPX is headed for a fall.
Within Friday’s 13F filings news was the revelation that the firm, founded by legendary investor George Soros, increased a put position on the S&P 500 ETF   SPY by a whopping 154% in the fourth quarter, compared with the third. (A put or short position basically gives the owner the right to sell a security at a set price for a limited time, and in making such a bet, an investor generally believes the security is going to decline.)
The value of that holding, the biggest position in the fund, has risen to $1.3 billion from around $470 million. It now makes up a 11.13% chunk of all reported holdings. It had been cut to 5.14% in the third quarter, from 13.54% in the second quarter, which itself marked another dramatic lift on the bearish call.  The numbers can be found at Whalewisdom.com, which makes them slightly easier to digest than the actual SEC filing.
READ MORE
Please share this article
at 12:04 AM No comments:

Felix Zulauf is always worth listening to, whether you agree or disagree with his position(s). He is worried about stock valuations, especially in the US. A five-minute Barron’s interview, well-worth watching for anyone in the markets, is available at Zerohedge. Mr. Zulauf sees serious danger ahead. In this interview he provides his advice as to what may happen and how you might protect yourself.
Here is Zerohedge reporting on Zulauf’s latest warning:


“There is a valuation problem with most global equity markets – the most with the US,” warns Felix Zulauf in the following brief clip, adding that sentiment “is extremely one-sided,” but the classic bear-market-inducing recession, he notes, is not on the immediate horizon. Instead, he warns, other problems may be the catalyst for a correction in the US – specifically China’s “mother of all bubbles”, fragility in Asian banks, and balance of payments crises continuing in emerging markets. Zulauf suggests “you have to be short stocks, own US treasury bonds, and also buy gold as panic and risks go up.”

There is nothing new here for most who follow this website. The question, as always, is not if but when.
READ MORE
Please share this article
at 12:04 AM No comments:

Applied Micro Circuits Corporation provides computing and connectivity solutions for next-generation data centers and service providers. The company’s products include the X-Gene ARM 64 bit Server on a Chip solution, along with the X-Weave family of connectivity products, for cloud/hyperscale data center and enterprise applications. Its X-Weave products address various segments, including 10, 40, and 100 Gbps solutions serving data center and service provider market opportunities. These connectivity products include devices for optical transport network equipment and physical layer devices that transmit and receive signals in a high speed serial format. Applied Micro Circuits Corporation was founded in 1979 and is headquartered in Sunnyvale, California with sales and engineering offices located throughout the world.
To review a current H&S pattern on Applied’s stock, please take a look at the 1-year chart of AMCC (Applied Micro Cirsuits Corporation) below with my added notations: AMCC had rallied from a low of $6.50 last April to a peak of $15 back in October. Over the last 7 months the stock had created a very important “neckline” of support at $10.50 (blue). Above the neckline you will notice the H&S pattern itself (green). Confirmation of the H&S occurred towards the end of January when AMCC broke its $10.50 “neckline”. So, the stock should be moving lower overall from here.

The Tale of the Tape: AMCC confirmed a head & shoulders pattern. A short trade could be entered on any rallies up to or near the $10.50 area. A significant break back above $10.50 could negate the forecast for a move lower.
Please share this article
at 12:03 AM No comments:

Gold And Silver Surge & A Frightening Look Into Our Future

kingworldnews.com / February 16, 2014
Today a man who has lived in 18 countries around the world, and witnessed collapses in many of these countries firsthand, spoke with KWN about the gold and silver surge, and also gave us a frightening look into our future.  Keith Barron, who consults with major companies around the world and is responsible for one of the largest gold discoveries in the last quarter century, also shared fascinating firsthand experience in Argentina.
Barron:  “We have had gold and silver on a tear lately.  This is a move we have been waiting for as gold has been building a base for quite some time now.  Gold has now broken through some very key resistance levels….
READ MORE
Please share this article
at 12:03 AM No comments: