More records for the market to start off the holiday shortened week as the market internals were positive in line with the market’s gains. The small-caps once again led the way as the S&P 600 and Russell 2000 were both up over 1%.
The Dow Utilities and the Philadelphia Oil Service Index led on the downside losing over 0.80% on the day. The market seemed to shrug off the disappointing economic data and the market gets a series of new economic reports before Thanksgiving.
Today we get the second reading on the 3rd quarter GDP, the S&P Case-Shiller Housing Price Index, and Consumer Confidence. On Wednesday, we get the University of Michigan's month end reading on Consumer Sentiment, Durable Goods, New Home Sales, and the Pending Home Sales Index.  (more) 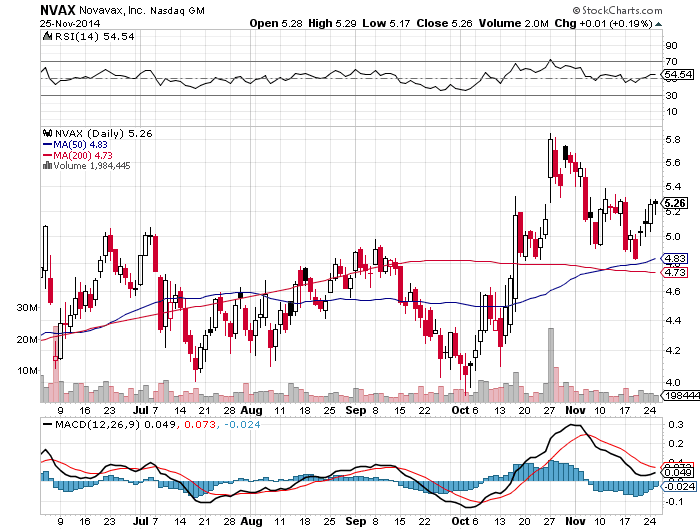 The best penny stocks to buy for 2015 have something many penny stocks don’t give investors. They all belong to solid companies.
You see, penny stock investing is full of risks. Shell companies masquerade as profit machines. Pump-and-dump scams can leave investors penniless. And over-the-counter (OTC) and Pink Sheets stocks don’t report financial information.
You won’t find any of that here. These five stocks all trade on the New York Stock Exchange or Nasdaq. They have strong 2015 guidance figures. Some operate in a high-growth industry.  (more)

OPEC to Declare War on the US on Thanksgiving Day

caseyresearch.com / By Marin Katusa / Nov 25, 2014
In two days, on Thanksgiving Day in the US, the Organization of the Petroleum Exporting Countries (OPEC) will meet in Vienna. The hot question of the day is, of course: Will OPEC cut oil production or not, and by how much?
Saudi Arabia alone makes up 25% of OPEC’s oil production and is OPEC’s controlling member. Will Saudi Arabia want a reduction, and will OPEC make a meaningful production cut of, say, over 2.5 million barrels of oil per day (bopd)?
2.5 million barrels—that’s the amount the current bulls have been speculating about. (In comparison, the average production cut by OPEC over the last 30 years was around 1.25 million bopd.)
My answer is no; there’s no way that OPEC under Saudi Arabia’s watch will cut production anywhere near 2.5 million bopd. At most, it’ll make a nominal cut, most likely between 500,000 and 1 million bopd… closer to 500,000, if any cut at all.
A senior officer of OPEC agrees with me, as you’ll see in the video interview below.

Even if OPEC does agree to cut oil production—and anything below 2.5 million bopd isn’t going to change the current oversupply of oil—we fully expect some of the member states to cheat and not stick to their production quota. That’s an assumption the aforementioned OPEC officer confirms.

The Four Best Investments for a Falling Yen

The yen is poised for a dive, and we've found the best investments for a falling yen.
Japan's 20-year fight with deflation was made worse last week with news that the country is in recession.
This was after the Bank of Japan announced an acceleration to its so-called "qualitative and quantitative easing program" on Oct. 31.
Japan will be pumping trillions of yen into its economy in the months to come. Japan's goal is to stoke inflation, spur demand, and fuel export growth. (more)

Here's the U.S. Dollar's Next Move

Last month, I told you the U.S. dollar was going to break down.
You see, parabolic moves – a move that is nearly straight up in an asset – always end at some point.
The dollar did pull back shortly after my essay. But it wasn't the dramatic decline that typically follows a parabolic move. It was mild and shallow.
Since then, the U.S. Dollar Index has rebounded and rallied to an even higher level. And traders are betting on the rally continuing.
But in the short term, I'm not so sure...
Take a look at this daily chart of the U.S. Dollar Index... 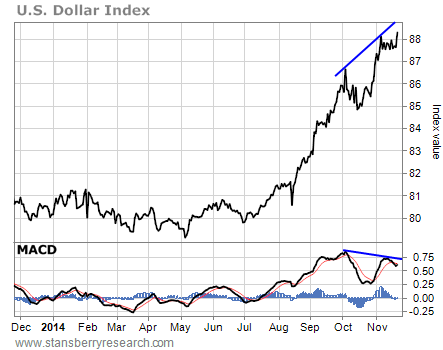 Note the Moving Average Convergence Divergence (MACD) momentum indicator at the bottom of the chart. The MACD is a measure of overbought and oversold conditions. And today, the MACD is overbought – which warns of an impending decline in the market.(more)
Please share this article
at 12:03 AM No comments: Links to this post