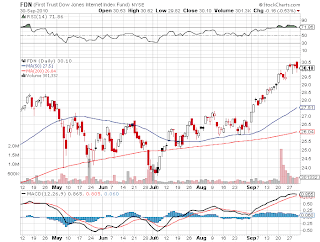 You can always count on one thing in the technology sector: Change! The cutting-edge inventions that fascinated us so much back in the 1990s are de rigueur now. Where will we be in ten years? I can only imagine.

As I said last year in my Trade Technology with ETFs column, playing tech trends with individual stocks is a high-risk game. You never know where the next big breakthrough will originate. Even a portfolio of 15-20 tech stocks might not catch the big winners.

The ideal solution: Exchange traded funds (ETFs). But you still have to know what you are buying. These days, the answer is not as easy as it might look.

Here’s the problem: “Technology” is a very broad term. You can take your pick of tech-oriented ETFs and mutual funds. The big ones will be composed of the same few dozen names — highly liquid stocks that won’t get anyone in trouble.

With the plain-vanilla segment well covered, ETF sponsors are defining narrower and narrower niches in an attempt to distinguish their offerings. Unfortunately, the “definitions” are not always as clear as they might seem. (more) 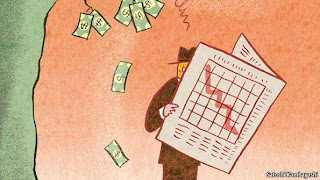 DIVIDENDS do not get the respect they deserve. Over the long run they provide the bulk of equity investors’ returns. Work by Elroy Dimson, Paul Marsh and Mike Staunton of the London Business School* found that over the period from 1900 to 2005, the real return from global equities averaged 5%. The mean dividend yield over that period was 4.5%.

Despite this, stockmarkets devote a lot more time to forecasting and analysing profits than they do to thinking about payouts. Profits can be easily manipulated and come in a bewildering variety of forms (operating, reported, post-tax, pre-exceptional, etc). Dividends are (mostly) paid in cash and so are hard to fake.

In America dividends seemed to go out of fashion in the 1990s. A yield of 2% or so appeared trivial when the market was rising by 20% a year. The disrespect for dividends also reflected the belief that, for tax reasons, share repurchases were a better way of returning cash to investors. But share repurchases are much more volatile than dividend payouts and were briefly negative in 2008 (firms issued more shares than they bought back). Dropping a buy-back programme can be done on the quiet. A dividend cut is a very public statement of corporate weakness. (more)

China and Japan are having a small but potentially painful dispute over the ownership of a small chain of islands in the East China Sea.

These islands have very little significance other than the oil deposits that may lie around them. Whoever owns these islands would have claims to the mineral deposits on the ocean floors surrounding the islands.

Tensions heated up when a Japanese coast guard boat collided with a Chinese fishing vessel on September 7. Japanese authorities detained the Chinese captain and tough talk flowed from both sides.

The culmination was the temporary halt of exportation of rare earth metals from China to Japan.

Rare earth? No, I’m not talking about the 1970′s rock group nor am I talking about uranium or plutonium. I’m talking about a group of minerals that contain elements quite rare when discovered in Sweden in 1787. (more)

When you're just starting out in the workforce, retirement seems like a million years away. Besides, you likely have student loans to pay off and maybe a car loan. And odds are, you aren't making a great salary in your first job, if you've even got a job following graduation.

Still, compounding is your ally in retirement savings, so the earlier you start saving, the better. When you begin retirement planning in your 20s and 30s, those dollars have years to grow and are potentially much more valuable than dollars you save in your 50s and 60s -- though any savings helps.

It's important to establish good savings habits when you're young, even though you're likely on a tight budget, says Joe Jennings, investment director for PNC Wealth Management in Baltimore.

1. Budget Carefully When Looking For Work

It's not really possible to start a retirement savings fund when you're going out on interviews and looking for a job. But there are ways to cultivate a low-spending mindset to prepare for saving for retirement once you do get a job. (more)

6 Rules for Investing in Internet Stocks and 8 Promising Picks 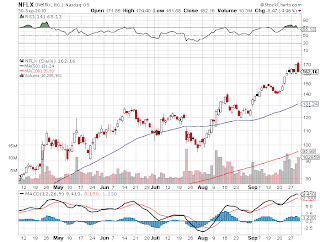 Ever since Al Gore (or whoever) invented the Internet, entrepreneurs and investors have been trying to find ways to profit from it. Few investment activities are more fun than picking Internet stocks -- fun, risky and, sometimes, fulfilling. In 2002, I invested in the stock of Netflix (symbol NFLX) shortly after the film-rental company's stock went public at $15. I loved its Big Idea: videos, ordered online, that you could keep as long as you wanted and return by mail, to be replaced by new titles. The business was deliciously simple; at the time, anyone could do the arithmetic and determine that if Netflix acquired three million subscribers, it would make decent money.

In fact, the next year Netflix started to show a profit, and the stock shot up to $60. Well satisfied with a three-bagger (as Peter Lynch, the legendary former manager of Fidelity Magellan Fund, calls a tripling in share price), I sold all my stock. Shortly afterward, Netflix split two for one, and for the next five years I repeatedly patted myself on the back as worries about competitors and pricing pressure kept the shares from breaking out.

Then, in 2009, Netflix made some major breakthroughs. Customers began to forgo the mail for the joys of being able to download movies from Netflix via the Internet. Netflix even struck deals with Microsoft, Nintendo and Sony that brought videos directly to game consoles. Shares of Netflix, which now has more than 13 million subscribers, closed at $118 (the equivalent of $236 before the split) on August 6. (more)

Wal-Mart Stores Inc.’s prices rose in September to the highest level in at least 21 months, according to JPMorgan Chase & Co., as the world’s largest retailer scaled back discounts from earlier this year.

The cost of a 31-item basket of goods at a Wal-Mart in Virginia was $95.75, a 2.7 percent increase from August and a 5 percent gain from the start of 2010, analyst Charles Grom said today in a report. The price is the most since the New York- based analyst began the survey in January 2009.

Prices for produce climbed as Wal-Mart offered almost no discounts on food last month, Grom said. Price cuts on items such as cereal and ketchup failed to attract as many consumers as Wal-Mart anticipated, dragging down sales in the latest quarter, U.S. stores chief William Simon said last month.

Produce accounted for 7 of the 31 items in the basket, with prices 10 percent higher in September than the previous month. Prices for dairy products rose 2 percent, and meat was unchanged. (more) 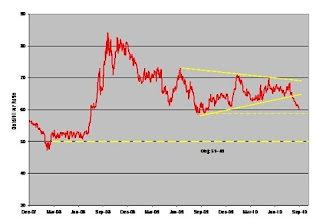 September's been a good month for traders banking on a decline in the gold/silver ratio.

When we first looked at the potential for a breakout move ("How To Trade The Gold/Silver Spread"), the ratio — basis the December COMEX contracts — was 64.4-to-1. In other words, one ounce of gold was "worth" 64.4 ounces of silver. Since then, both gold and silver have climbed, but at different paces. As of Monday's settlement, December gold's risen 4.0 percent vs. silver's 10.7 percent gain.

The outsized appreciation in the white metal has pushed gold's price multiple down to 60.5x and lined the pockets of spread traders. The return on margin — assuming exchange minimums were obtained — has been 133 percent. Not bad for 17 trading days. (more)

The price of gold seems to have no limit, but recent movement in the price of silver points to a potential end to gold's rally.

For a peek into the future of the price of gold, look no further than its precious metal sibling, silver. The poor man's gold has been on the same streak as the yellow metal, but recent moves have some of the most bullish players wondering if precious metals might be headed toward the end phase of their rally -- a point where prices might not get much higher.

Gold futures for December delivery closed Wednesday at $1,310.30 an ounce on a weaker U.S. dollar and expectations that officials will pump more money into the sluggish economy.

But while silver futures are still much cheaper closing at $21.95 an ounce, it has outperformed gold on this recent run. The price of silver this year has jumped 30%, while gold has climbed about 19%. And at one point on Wednesday, silver reached its highest level since October 1980 at about $22 an ounce. Historically, when silver catches gold or even surpasses its rate of growth, it's a sign we've arrived near the end of the rally. (more)
at 12:12 AM No comments: 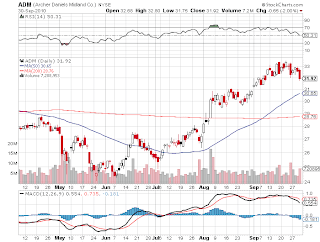 smartmoney.com,
Over the past year, Wall Street analysts have scrambled to raise their quarterly earnings forecasts ahead of company reports to reflect a surprisingly fast rebound in corporate profitability. That momentum might now be fizzling.

Forecasts for third-quarter earnings underlying the S&P 500 have fallen by a smidgen since the end of June, according to Standard & Poor’s. So have sales forecasts. Over the past four weeks, the ratio of index members with falling earnings forecast to rising ones is about 13-to-8.

If forecasts fall further, it could bode poorly for broad market returns. However, the companies below are defying the trend. Their current-quarter earnings estimates have increased over the past four weeks, as have their sales forecasts. Long-term studies show that increases in earnings estimates tend to foretell handsome stock returns. The same is presumably true of sales; one long-term study that looked at companies that beat earnings estimates found that the largest subsequent stock returns accrued to those companies that beat sales estimates, too. Their good fortune was perhaps more likely to reflect true growth rather than mere cost-cutting. (more)
at 12:09 AM No comments:

Stocks sizzled in third quarter, but will it last? 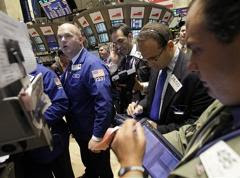 When you open your quarterly financial statements in the next few weeks, you might be both pleased and puzzled.

Despite the economic doldrums, the stock market put together a sizzling 11 percent return over the past three months, including its best September since 1939. For a time Thursday, the Dow Jones industrial average appeared headed for 11,000.

But the gains are deceptive, market analysts say. While news about the economy has improved, there's no reason to believe it's roaring back. And the big advance was driven by a relatively small number of traders playing with a lot of money.

"I think a lot of this is just misguided optimism," says Rob Arnott, chairman of Research Affiliates, an investment firm in Newport Beach, Calif. "The headwinds we face are pretty daunting."

In other words, few are calling it the beginning of the next bull market -- not with unemployment still near 10 percent and stocks bound in what market technicians call a trading range.

Still, the gains were impressive. In September alone, the Standard & Poor's 500 index rose 9 percent, the Dow almost 8 percent and the Nasdaq composite index 12 percent. Every sector of the market was up. (more)