If you have young children, you may be familiar with the educational toy company, LeapFrog Enterprises (NYSE: LF). The small-cap, California-based firm designs and develops technology-based learning tools to help kids tackle reading and writing.

As the mother of 17-month old little boy, I'd have to say his LeapFrog toys are my favorite of the bunch. They're robust, interactive and educational. But, best of all, they're fun -- even for me!
LeapFrog's flagship educational product is the LeapPad2. This is an interactive tablet, like the Apple (NASDAQ: AAPL) iPad, but designed specifically for kids, aged 3 to 9. It retails for around $100. It lets kids play fun, educational games, run apps, and even take pictures.

In the U.K., the LeapPad2 was the hottest selling toy in December. Although it hasn't quite caught on as much in North America, it's still very popular. In fact, during the holidays, retailers, like Toys "R" Us and Amazon.com (NASDAQ: AMZN) only allowed customers to purchase two LeapPads at a time to keep up inventory supply, due to such strong demand. And, with exciting, new products expected to be released in April 2013, the outlook for LeapFrog looks promising.

From a technical perspective, LeapFrog stock appears to be on the verge of a bullish breakout.

The Secret to Long-Term Wealth: Slow and Steady


I know that this is not a new idea, for we have all heard the story of the tortoise and the hare since we were little. Slow and steady always wins the race.

But it is so easy to forget it when most of what we read in the financial press is written to sell magazines. Slow and steady does not sell magazines.

Having seen the damage that is caused by always looking for the next hot investment, I have been really interested in this idea of slow and steady investing. I love the term "slow capital" that I first heard from Fred Wilson. I would also add "steady." Slow and steady capital comes as close as possible to describing my ideal investment process. 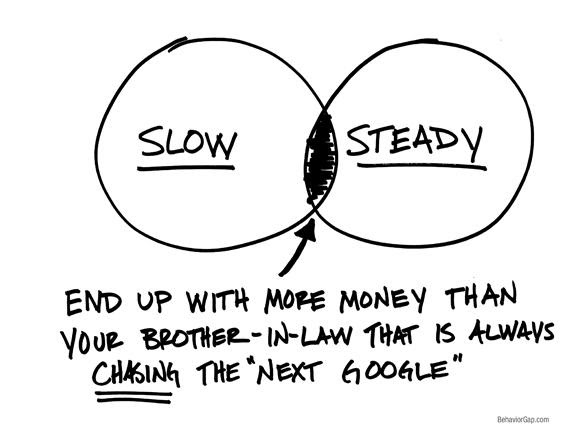 One of the Best Stocks to Own for Growth and Income

The mobile market is huge. And in the past few years, it has been growing exponentially across the globe. Mobile technology is constantly reshaping how we interact in our daily lives. From smartphones to tablet computers, can you think of anyone who doesn't own one of these mobile devices?

There's no question we are a connected world: There are now an estimated 6 billion mobile subscribers worldwide, according to DigitalBuzz.

Consumers aren't just texting anymore, they're using mobile devices for bank transactions, shopping and a growing list of other uses. The demand for these services is exploding each year and along with it is the need for more cellphone towers.

This is where a huge investment opportunity lies.

Tower companies make money owning wireless broadcast towers and leasing them to telecommunication operators on long-term contracts that escalate in price by about 3-5% annually. In other words, owning a telecom tower is equivalent of owning real estate.

One of my favorite types of investments is real estate, especially real estate investment trusts (REITs). REITs offer investors an opportunity to gain access to a real estate portfolio without the headache of being a landlord. They typically include high-quality commercial properties, ranging from apartment buildings and office complexes, to health care facilities and shopping malls. Because REITs have no investment minimums, they allow large and small investors an easy way to participate in commercial real estate.

The best part: REITs must pay out 90% of its operating profits as dividends in order to be exempt from having to pay corporate income taxes. As a result, most REITs pay frothy dividends. With so many REITs available, I love the ones that focus on niche markets like cellphones.

Although these tower owners operate in the same environment, American Tower's 39.4% operating margin trumps competitors like Crown Castle (NYSE: CCI) (-19.9%) and SBA Communications (Nasdaq: SBAC) (-29.3%). It also has higher revenue per tower, along with less exposure to weaker-margin network-development segments.

This stock has been on fire since 2009 and I don't see it slowing down. Take a look at the chart below.

Why American Tower
The third quarter of 2012 was another solid period for American Tower as it reported improved margins and another upward revision of expected earnings. Year-over-year revenue increased 13.2% to $713.3 million, while growth continues to be fueled from its international expansion.

American Tower's three biggest revenue drivers continue to be Latin America, India and South Africa. This group reported more than 40% core revenue growth, along with same-tower growth of 8.4%. What impresses me is the fact that more than 90% of its new international business is in the form of new leases rather than investments.

This has been one of the main reasons American Tower has delivered 35% annualized returns for its shareholders in the past 10 years. Last quarter, the REIT built 580 international sites and acquired another 850, adding more than 12,000 international communication sites to its already sizeable portfolio.

One look at the competition in this space and American Tower is clearly the leader of the pack. A quick look at the table below, and it's easy to see American Tower has superior margins, a more diversified business model, relatively low leverage and a more attractive price-to-earnings (P/E) ratio.

Risks to consider: American Tower faces the same risk as any tower company as changes in consumer demand for wireless services, next-generation technology deployments, or zoning and environmental regulations can all affect the firm's profitability. It also has a large exposure to emerging markets, which boosts its growth profile but also adds risk and uncertainty. Another concern is that more than half of its tower revenue is driven from the four largest U.S. carriers. If there is a major disruption in spending for any one of these four clients, then it could negatively affect revenue and thus profitability. That being said, American Tower is still well positioned to continue dominating its market.

Action to Take --> This stock is a great combination of growth and income. Buy American Tower up to $80 a share. It is currently trading around $76 and could easily hit $100 a share within the next 12 months. This one yields a small 1.2%, but has a lot of growth potential as it expands across the globe. American Tower also has the longest contracts in the sector, giving the stock lots of visibility and less day-to-day volatility, compared to competitors.

This is the Only Way to Trade the VIX


The CBOE Volatility Index (VIX), also known as the "fear index," measures stock market volatility based on premiums paid for option on the S&P 500 index. It is a complex calculation, but what traders need to know is that VIX rises when prices are falling rapidly, because options premiums tend to rise just as rapidly. Gains in option premiums lead to higher values of VIX. When markets are rising steadily or moving sideways in a consolidation, options premiums drop, as does the value of VIX.

We are now at a point of low volatility, which means we will inevitably see a return to high volatility at some time in the future. Recently, VIX fell to its lowest level since the summer of 2007, leading many traders to wonder what would happen if they bought low volatility.

From the chart below, it looks like they would eventually be rewarded with profits, because after reaching low levels, VIX does rise.

In reality, trading VIX is not so straightforward. VIX is a "wasting asset" based on options and traded with derivatives that have expiration dates. Many derivatives expire worthless and that creates a downward bias in the expected returns.  (more)

My Top 3 Momentum Stocks Going Into 2013


The trend is your friend. It's one of the most basic and powerful concepts of investing.

The past four years have been a great example of that. After rebounding sharply In March of 2009, the averages have been on a miraculous run higher, defying all the bears and negative data to hit a series of new multi-year highs. Any pullback in the past four years was a chance to buy low and score quick gains. Take a look at the big rebound in the S&P 500 below.