I get this question a lot: "Should I buy gold now, or wait for a pullback?"

It’s a valid question. For nearly two years, gold hasn't had a serious decline. There have been pullbacks, of course, but nothing assumption-challenging. In fact, since October 2008, gold’s largest price drop is 10.6% (based on London PM fix prices), and yet the average of all declines since 2001 is 13% (of those greater than 5%). The biggest pullback we've seen this summer is 8.2%. Technically the summer's not over, but I'll admit I'm surprised we haven't had a better buying opportunity.

So, is now the time to buy? It depends on your honest answer to another question: “Do you own enough gold?” By “enough” I mean an amount that lends meaningful protection on your assets. By ”meaningful” I mean that no matter what happens next – another financial blow-up, accelerating inflation, crushing deflation, war, a plummeting dollar, more reckless government spending – you won't worry about your investments.

Whether you should buy now is almost irrelevant if you don't already own a meaningful amount of gold. If you earn $50,000 a year, how is one gold Eagle coin going to protect you if the dollar plummets and sends inflation soaring? If your investable assets total $100,000, is your nest egg sufficiently protected owning two gold Maple Leafs? This is all akin to buying a $50,000 insurance policy for a $500,000 home. (more)

When China Rules the World: An Interview with Martin Jacques 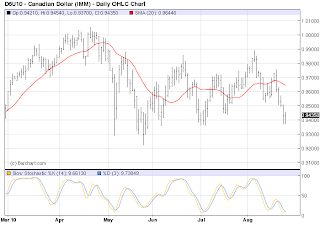 TORONTO (Reuters) - Canada's dollar held near seven-week lows against the greenback on Wednesday as weak U.S. economic data added to worries about the recovery, though a late rebound in commodity and equity markets cut most of the currency's early losses.

Morning figures showed new U.S. home sales slumped to their slowest pace on record in July and orders for costly durable goods were soft, heightening fears the economy was at risk of a new downturn.

Later in day, bargain hunters in search of beaten-down assets boosted U.S. stocks to finish in positive territory, while oil settled higher above $72 a barrel, snapping five days of losses.

"Since weakening early this morning (the Canadian dollar) started to strengthen throughout the day at a slow pace," said Camilla Sutton, senior currency strategist at Scotia Capital.

"And it's been a similar story across asset classes, so we've seen oil move higher and equities make up for their losses early on." (more)

The Elusive Canadian Housing Bubble: Summer 2010 Edition - Canary In A Coal Mine

Our friend Alec Pestov has just completed the follow up to his original in-depth analysis of the Canadian housing market: "This second edition of the report is the first of the semi-annual sequels for the original paper to provide timely updates on the state of the housing market in Canada. This document introduces a structure of the semi-annual releases, and your comments and suggestions regarding it are always welcome." For all in the market looking to buy or sell real estate in Canada, this is a must read.

The Elusive Canadian Housing Bubble: Summer 2010 Edition - Canary In A Coal Mine

The Elusive Canadian Housing Bubble - Summer 2010
at 12:28 AM No comments: Links to this post

Silver and Gold Breaking Out As Safe Haven Buying Continues

Silver had very powerful break out today as investors are seeking assets that are safe and will retain value during a debt crisis. Silver is seeing demand at these price levels as it is historically cheap relative to gold. If the ratio came down to the levels it was in 2006 it would be close to $27 an ounce. Silver is soaring because investors are realizing this is a hard asset, it is money and it is historically cheap compared to gold.

Gold has reached overbought conditions from my July 28th buy signal. Right now gold is a bit overbought while silver is at an interesting buy point, having found support for the fourth time at its long term 200 day moving average. Today’s breakout of the symmetrical triangle, a very bullish chart pattern, is a sign that silver has built up a lot of internal strength and could break out into new three year highs. Remember, silver is significantly below all time highs while gold has already broken into new highs.

While I am bullish on gold, I believe investors could see a higher percentage move in silver. I have also alerted my readers to a specific mining company which has recently found a major discovery in Mexico. Pure silver discoveries are very rare. Silver supply is mostly produced as a byproduct which makes supply very inelastic. A new pure silver discovery in a silver bull market could receive a nice premium. (more) 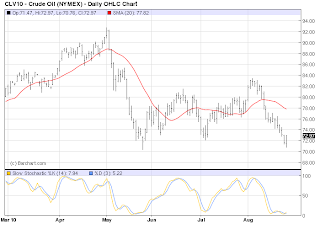 (MarketWatch) -- Crude-oil futures ended Wednesday in positive territory, despite a surprise increase in inventories and weak economic data that offered little hope for a surge in demand.

Crude for October delivery rose 89 cents, or 1.2%, to settle at $72.52 a barrel on the New York Mercantile Exchange, after setting an 11-week low on Tuesday. Earlier in the session, oil had posted an intraday low of $70.69 a barrel.

Gasoline for September delivery also turned as the session progressed, adding a penny, or 0.8%, to end at $1.86 a gallon, after hitting an eight-month low on Tuesday.

"There was no huge negative reaction" to the weekly data, which gave oil some measure of strength, he added.

Natural gas, however, bucked the positive trend and maintained its losses, with the September contract retreating 17 cents, or 4.2%, to $3.87 per million British thermal units. That's the lowest price since late March and the first time it traded below $4 since early May. (more)

Why US Treasury Notes Will Eventually Yield Nothing 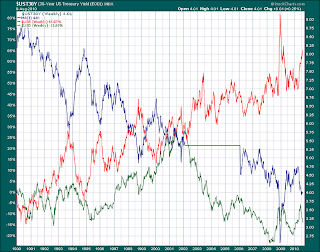 For all investors seeking income, I have some bad news for you. US Treasury notes and bonds will eventually yield nothing. That’s right, I said it. “Zero percent interest coupons”. Many pundits would argue the opposite. And yes, the argument for higher interest coupons in the future is valid and sound. The US is currently following a strategy of debt destruction such that as I write, the nation is closing in on $13.5 trillion in debt. To see the number is quite startling. It is: $13,500,000,000,000.00. Mercy! The number is so large, most calculators can’t account for all the numeric placeholders. The number is so large, we now round up by hundred billions. The number is so large, the late astronomer, Carl Sagan, referred to really large numbers as “billions and billions”.

The good news is that there appears to be a limit. Zimbabwe wrote the book on trying to print their way out of economic dysfunction and eventually stopped printing with a z$100 trillion bill. As we all know, a printing press that never stops promotes inflation that eventually makes the printing press irrelevant. Not long after the introduction of the z$100 trillion, Zimbabwe thought about introducing the z$1 quadrillion bill. But, I suppose they reconsidered due to the idea that it would take too long to make change at the McDonald’s drive thru. Actually, by the time they got through destroying their economy, a z$1 quadrillion bill would not even buy a Big Mac! Have we not learned anything! (more)
at 12:20 AM No comments: Links to this post

Investors face defaults on government bonds given the burden of aging populations and the difficulty of increasing tax revenue, according to a Morgan Stanley executive director.

“Governments will impose a loss on some of their stakeholders,” Arnaud Mares in the firm’s London office wrote in a research report today. “The question is not whether they will renege on their promises, but rather upon which of their promises they will renege, and what form this default will take.” The sovereign-debt crisis is global “and it is not over,” he wrote.

Rather than miss principal and interest payments, governments may choose a “soft” default in which they pay back debts with devalued currencies resulting from faster inflation or force creditors to take lower returns, Mares said in an interview.

JPMorgan Buys Back More of Its Silver and Gold Short Positions

As I mentioned in my closing comments in this column yesterday, it would be interesting to see if the 50-day moving average in gold... and the 200-day moving average in silver got taken out to the downside on Tuesday. Well, they broke through both, but it was only by an eyelash [and a few seconds] in each metal.

7 Bargain Stocks You Can Feel Good About Now 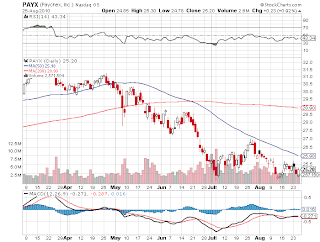 A volatile market can be stressful for buy-and-hold investors but a blessing for opportunists. At its low in July, Standard & Poor’s 500-stock index had fallen 16% from its April high. Although the market has recovered a bit, plenty of high-quality stocks remain in the bargain bin. If you’ve been looking to capitalize on the market’s current funk, consider scooping up one or more of these names on days when the jittery market drags their prices down to even deeper discounts (share prices and related ratios are as of the August 19 close).

The biggest worry for Paychex shareholders is that there will be little or no growth in demand for its payroll-processing services as long as the unemployment rate remains elevated. Paychex targets small businesses -- 99% of the firms it serves employ fewer than 100 people. But companies are typically reluctant to switch payroll providers, so Paychex has plenty of pricing power. That has helped the firm generate an average return on invested capital of 70% over the past ten years and average growth in free cash flow (the amount of cash profits left after the necessary capital outlays needed to maintain a business) of 14% annually over the past five years. Plus, Paychex has no long-term debt, says Jeff Auxier, manager of Auxier Focus Fund (AUXFX), which holds the stock. The shares, which are 21% off their late-March high, trade for 19 times estimated profits of $1.36 for the fiscal year that ends in May 2011 and yield a hefty 4.9%. (more)
at 12:15 AM No comments: Links to this post

The Congressional Budget Office (CBO) forecasts the U.S. budget deficit will hit $1.3 trillion this year. An astronomical figure, to be sure, but that’s lower than was projected in March. It’s also less than last year’s record $1.41 trillion deficit, which was close to 10% of GDP.

And, that's the good news.

As the deficit grows so does the national debt, which is currently more than $13.3 trillion, according to official figures.

But the situation is actually much, much worse, according to Boston University economics professor Laurence Kotlikoff.

“Forget the official debt,” he tells Aaron in this clip. The “real” deficit - including non-budgetary items like unfunded liabilities of Medicare, Medicaid, Social Security and the defense budget - is actually $202 trillion, the professor and author calculates; or 15 times the “official" numbers. (more)

Economy on Verge of Double-Dip Recession?