Despite Choppiness, Gold To Have Massive Breakout In 2013

With continued volatility in gold and silver, today King World News wanted to share what top Citi analyst Tom Fitzpatrick released concerning the action in the gold market. Fitzpatrick has been incredibly accurate regarding his forecasts for both gold and silver.
Here is what top Citi analyst Fitzpatrick had to say, along with powerful charts: “Gold: Gold held the 76.4% retrace against the Nov low yesterday thereby giving an early indication that the correction down may have ended. Additional support comes in at $1,669.
Tom Fitzpatrick continues @ KingWorldNews.com

Oil and gas along with their equities have been underperforming for the most part of 2012 and they are still under heavy selling pressure.

I watch the oil futures chart very closely for price and volume action. And the one thing that is clear for oil is that big sellers are still unloading copious amounts of contracts which is keeping the price from moving higher. Oil is trading in a very large range and is trending its way back down the lower reversal zone currently. Once price reverses back up and starts heading towards the $100 and $105 levels it will trigger strong buying across the entire energy sector.

Crude Oil, Energy & Utility Sector Chart – Weekly Time Frame
The chart below shows the light crude oil price along with the energy and utilities sectors. The patterns on the chart are clearly pointing to higher prices but the price of oil must shows signs of strength before that will happen. Once XLE & XLU prices break above their upper resistance levels (blue dotted line) they should takeoff and provide double digit returns.

Looking at the XLU utilities sector above I am sure you noticed the steady rise in the price the last couple of years. This was a result in the low interest rates in bond price and a shift from investors looking for higher yields for their money. Utility stocks carry below average risk in the world of equities and pay out a steady and healthy dividend year after year. So this is where long term investment capital has/is being parked for the time being.

Last week I covered utility stocks in detail showing you the Stage 1 – Accumulation base which they had formed. The chart below shows the recent price action on the 2 hour candle chart and recent run up. You can learn more about how to take advantage of this sector here:

Oil and Gas Services – Daily Time Frame
This chart shows a very bullish picture for the services along with its relative strength to oil (USO) at the bottom. While the sector looks a little overbought here on the short term chart, overall it’s pointing to much higher prices.

Energy Sector Conclusion:
In short, crude oil looks to be trading in a VERY large range without any sign a breakout above or below its channel lines for several months at the minimum. But if the lower channel line is reached and oil starts to trend up then these energy related sector ETFs should post some very large gains and should not be ignored.
at 12:06 AM No comments:

Bullish Technology Stock Forms Double Bottom; Will It Break Out?

The semiconductor industry has not performed well in 2012, with the broader index trading flat year-over-year. That said, there is hope for a brighter 2013.

According to the World Semiconductor Trade Statistics, produced along with the Semiconductor Industry Association, the market is set to advance just 0.4% in 2012 to $301 billion. (Source: Finnegan, M., “Semi industry to see flat growth this year, hopes pinned on 2013,” TechEye.net, June 6, 2012, last accessed December 6, 2012.)

“We anticipated weakness in the semiconductor market, and substantially reduced our operating expenses as we entered the third quarter,” said Dave Bell, President and CEO. “This restructuring helped our profitability in the third quarter; however, the surprisingly sharp decline in the personal computing market led to lower overall revenue.”

Chart courtesy of www.StockCharts.com
In early October, the technology stock’s share price dropped on preliminary third-quarter revenue. It rebounded on October 25 when the company announced that quarter-over-quarter income increased to $2.0 million, or $0.02 per diluted share, from a net loss of $14.5 million, or $0.11 per share, in the second quarter of 2012.

Since then, Intersil’s chart has formed a double-bottom. While the technology stock’s share price remains bullish, having recently crossed above its 50-day moving average, it will need to break through a key resistance level near $7.50 for a full-blown reversal to be confirmed.

While the technology stock expects fourth-quarter revenue growth to be soft, going forward, it believes several of its top 10 growth drivers will materially contribute to revenue in early 2013. The technology stock also expects some drivers to begin ramping up by the end of this year. Speculation aside, Intersil remains a solid penny stock with strong fundamentals, restructured operations, and an encouraging long-term outlook.
at 12:05 AM No comments:

December Could Be Harsh For Apple

In 2012 there have been a series of transits that have impacted both the incorporation chart and the first trade chart that suggest the new technology is being blocked by potential outside influences that may be stalling the release of newer more advanced technology.  This could include the new television that was in news reports and suddenly is no longer a story.
In April 2012 Mars retrograde made an opposition to Uranus (rules technology) in the incorporation chart.  The transit lasted almost a month and the stock plunged.  Saturn (diminishing) peaked in a conjunction to Mercury (sales distribution) on September 24th while Uranus (technology and sudden changes) made an inconjunct to the moon (sentiment of investors) and wrecked more havoc on the stock.  These influences in the astrology usually don’t reverse instantly and suggest there are hidden forces working behind the scenes.
Pluto is transiting the 12th house of the IPO chart while squaring Jupiter (the stock) and Saturn suggesting an ultimatum could be threatening the leadership of the company and stock analysts may loose faith in Apple’s ability to move higher.
We could see a pullback for Apple December 3rd or 4th while Mars is square Mars and news about a possible change in leadership near December 6th.  The stock could fall further December 16th – 22nd while Jupiter is retrograde and afflicting both Saturn and the Sun in the Apple chart.  Mars will square the nodes December 27th-30th and could indicate negative news or downgrades for the stock.  At the same time Pluto will square Saturn and suggests institutional funds may start selling the stock.  Jeff has suggested Apple could pull back further than the recent low.  With the current astrology for the company it is possible to see a long drawn out pullback that gets to those levels.

It also provides guided user-generated content through Youku Paike and Youku Niuren programs; and produces a range of content, such as sponsored Web serial dramas, reality shows, interviews, and variety shows under Youku Originals brand. The company’s other services for users include online video search and discovery; online community services; and wireless video, iPhone channels and iPad, and P2P downloadable software client services. The company’s products and services for advertisers and customers comprise online advertising services, such as in-video, display, sponsorship, and other forms of advertisements; targeting solutions and viral video advertisements. Youku Inc. sells its products and services at youku.com. Youku Tudou Inc. was founded in 2005 and is headquartered in Beijing, the Peoples Republic of China.

Before discussing potential trading opportunities, please take a look at the 1-year chart of YOKU (Youku Tudou, Inc.) below with my added notations: 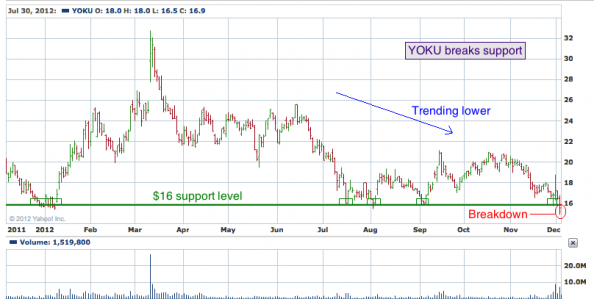 Over the last year YOKU has commonly found support at the $16 level (green). The stock has also been trending lower (blue) since March even though the overall market has moved higher during that period of time. This down trend would seem to imply that YOKU is gearing up for a break of support, which the stock did end up doing earlier this week (red).
at 12:04 AM 1 comment:

kingworldnews.com /
Today Ben Davies spoke with King World News about the shorts now being vulnerable to a price spike in gold.  He also discussed surging Chinese demand and supply troubles.  But first, here is what the rising star had to say about the action in gold:  “I actually think we are in and around the lows now, and the market will continue to stabilize here.  The other point would be that the fundamentals behind gold, in terms of mining supply, the cost of extraction, the grade degradation, this is a real issue.”
Ben Davies continues:
“You’ve had the CEO of Barrick saying, effectively, ‘gold extraction isn’t really economically feasible at these levels.  New supply isn’t going to come on until at least $3,000 (gold).’  So there really isn’t the supply.  China is a great example of where they’ve got desperate mining.
In 2011 they had 360 tons of supply….
READ MORE
at 12:03 AM No comments:

The "Chart of the Day" is Trimble Navigation (TRMB), which showed up on Wednesday's Barchart "All-Time High" list. Trimble on Wednesday posted a new all-time high of $56.07 and closed +2.09%. TrendSpotter has been long since Nov 5 at $53.63. In recent news on the stock, Trimble on Nov 1 reported Q3 EPS of 68 cents, above the consensus of 63 cents. Trimble Navigation, with a market cap of $7 billion, applies technology to make field and mobile workers in businesses and government significantly more productive. Solutions are focused on applications requiring position or location-including surveying, construction, agriculture, fleet and asset management, public safety and mapping.