As the European crisis gets worse, banks are getting more cautious about lending to one another.

The "TED Spread," which is the difference between Treasury yields and LIBOR (the London Interbank Offered Rate), is thought to be a good indicator of the direction of credit availability in the economy. When the TED Spread is rising, as it is now, banks are demanding higher interest rates for lending to one another and credit is tightening. When the TED Spread dropping, credit is becoming looser.

The TED Spread has been rising all year.

From Bloomberg, here's the TED Spread over the past month: 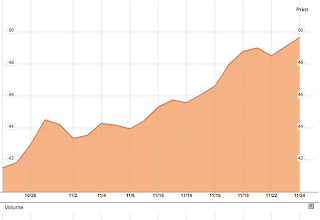 And here's the past year: 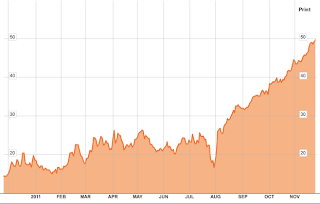 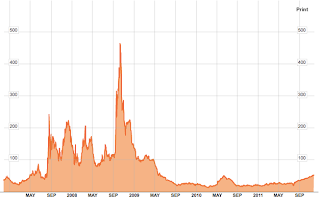 With the gold price high, the big gold producers are bringing home record profits. But for the last year or so, these stocks haven't gone anywhere. (The S&P 500 has actually outperformed the gold miners index.)

So gold stocks are cheap. Any time we get a dip in share prices, you should be buying. And we're getting a dip right now...


Over the last 11 days, the big gold miners index is down nearly 9%. That gives us a fantastic spot to get in.

As for how to get in, I like buying individual gold stocks. They offer the most upside. That's why we own a handful in my S&A Resource Report.

The thing is, I spend days or weeks analyzing each stock before we put it in the portfolio. That's how I make sure we're not taking on too much risk. But most investors don't have that kind of time. If you want a broad, less volatile, less time intensive way to own gold stocks, you can consider an exchange-traded fund (ETF).

GGGG tracks a diversified index of large gold miners. It's spread pretty thin, with only 6% of the portfolio in the biggest holding and its top 10 holdings making up 50% of the fund. Sometimes diversification is good. But in this case, it's not worth it. With GGGG, you're missing out on exposure to the biggest, best gold producers.

GDXJ holds a basket of "junior" gold miners. These are smaller and riskier companies. They are small because they own a single operating mine or are building new mines. (And its top 10 holdings include a silver miner.) This is definitely not the way to buy the biggest, best gold producers.

That leaves us with GDX, which holds a hefty 41.5% of the fund in the three major gold miners: Barrick Gold, Goldcorp, and Newmont Mining, respectively. I think this is the perfect spot for "armchair" gold investors.

You see, we want to own the best and most efficient mining companies that will benefit from rising gold prices. Those companies are the majors like Barrick Gold, Goldcorp, and Newmont Mining.

The strategy has been paying off. Over the last year, GDX outperformed GDXJ by nearly 20%. GDX also outperformed GGGG by about 10% since GGGG opened last March.

The best way to trade GDX now is to buy shares and limit your downside. An easy spot to set your stop is near the "floor" it's bounced off several times already.

As you can see from the chart, since the start of the year, the market hasn't let the price of GDX fall much below $52.50 per share... even in the October market bottom.

On the upside, if gold stocks finally start reflecting their increased earnings, the potential gains are much larger. And out of the gold-fund universe, GDX is my favorite diversified way to own gold stocks. With our downside limited, this is a no-brainer trade.

Below we highlight the current 5-year CDS (credit default swap) prices for the sovereign debt of 44 countries. The list is sorted by the least to most risky countries, and we also include the year-to-date change for each country. As shown, Norway currently has the lowest default risk, followed closely behind by the USA. Switzerland, Finland, Sweden and Australia are the only other countries with CDS prices that are lower than 100 basis points.

At the bottom of the list is Greece, which has astronomical default risk. Portugal, Argentina and Venezuela rank 2nd, 3rd and 4th worst and all have CDS prices of more than 1,000 basis points.

We’ve been hearing a lot recently about how the US is the best place for investors to be right now, and this analysis buoys that claim.

Hyperinflation: The Fall of the American Dollar

America printed ridiculous amounts of money in the last year, what do you think that stimulus (trillions) you may have heard about in the news is all about? the federal reserve has been anything but a failure for those who control it and created it to﻿ control the government of the united states. when we allowed a group of international bankers to create our money out of thin air we hung the noose around our necks. I spoke with someone who lived through Yugoslavia's massive hyperinflation. People general did barter as nobody could trust the currency. Really puts﻿ the emphasis on having items to use and trade. A pantry full of canned food would go pretty far if things get really bad.All records are broken sooner or latter 5 quadrillion % ? USA is the only candidate in the World to﻿ beat this record

the same concept applies today. when the government interferes in﻿ the free market, it just makes thing worse. social security: debacle! health care: debacle! banking: debacle! housing: debacle! when will it end?! health care, banking, and housing have morphed into profit motive, not for socially responsible care. Social Security have deformed into something different﻿ from what it was intended to become. It was good when it was enacted, it should have been slowly dissolved in the 60s. . Corporatism is taking capitalism down the drain with your country , my advice﻿ to all good American citizens pay all your debts and get the hell out of your country before the so-called government holds you down

Are There Any Disadvantages To A Second Passport?

Are There Any Disadvantages To A Second Passport?

I can’t even begin to describe how happy I am to be back in the land of the free… and yes, I’m talking about Chile.

I arrived a few days ago to beautiful summertime weather (remember, the seasons are flipped down here in the southern hemisphere). As usual, the customs officials at the airport were speedy, courteous, and efficient. From plane to cab I was out of there in 20-minutes– with luggage. This is par for the course in Chile.

It’s so nice to be in a place where you’re treated like a human being and agents of the government don’t go around robbing, molesting, and pepper-spraying peaceful citizens.

This is one of the many, many reasons why we’ve selected Chile as the home for our resilient community, and I’m happy to be back in-country so that I can dedicate myself to furthering this effort over the next several months.

When you step back and think about it, it’s extraordinary that we’re even talking about such a thing. Just five years ago, anyone who talked about a global economic slowdown was laughed out of the room. Today we are facing an all-out collapse of the fiat system. How quickly things change.

One of the best books on the subject that I’ve read lately is John Mauldin’s appropriately titled Endgame; John is one of the most accomplished and knowledgable financial writers on the planet, and he clearly explains why the end of the global debt supercycle is a foregone conclusion.

(FYI, the book is an easy read and I highly recommend picking up a few copies to give as gifts to all of your friends who still don’t get it…)

Last weekend, John and I had the chance to share a bowl of chips and salsa in an uptown Dallas bar and trade views about which governments might collapse and which have a shot at survival.

It was simultaneously depressing and hilarious… and I was certainly glad to be heading off to our farm in Chile afterwards. More on that next week– first, a few questions:

Trisha asks, “Simon- you probably heard that the Anonymous group posted the pepper-spraying policeman’s personal contact information on their website. What do you think of that approach?”

Hey, you know what they tell criminals– if you do the crime, you do the time. In this case, if you spray a peaceful crowd with a ‘less-than-lethal’ lachrymatory agent at point blank range, you get publicly shamed.

Police generally go unpunished for such actions. Whenever a cop is caught on tape tormenting peaceful protestors, the politicians and administrative officials always say that they’ll conduct a ‘full investigation’.

And then nothing happens. Months go by and the incident is forgotten. This is the unwritten rule between police thugs and the state– you protect my interests, and I’ll let you get away with brutalizing citizens to your heart’s content.

Assault is assault. We go to jail. They go on paid administrative leave. It’s a broken system, and Anonymous simply circumvented it. Outing the guy online to billions of people isn’t exactly Hammurabi’s code, but it’s a good start.

Next, Doug asks, “Simon, what’s the downside to obtaining a second citizenship? Obviously there’s some cost and time involved, but what else should I be concerned about?”

The advantages of having a second passport are extraordinary– more freedom, more opportunity, more options; most of all, it’s a great insurance policy against sovereign calamity.

Most North Americans and Western Europeans are blind to these advantages. They don’t understand why they’d ever need another passport because they already live in the pinnacle of civilization… or so they think.

Russians, Chinese, Argentines… these sorts of folks have personally experienced the ramrod fist of government. And they’re not taking chances.

Slowly, the developed West will begin to understand that their home government is their greatest threat. Unfortunately most of the second passport opportunities will be closed by then.

To address ‘disadvantages’, there may be some depending on the country. For example, if you obtain US citizenship as your second passport, you’re signing up for taxation on your worldwide income. Congratulations.

Taxes, conscription, and dual nationality limitations are generally the three big categories to watch out for, though most issues can be sidestepped with some planning.

Last, Neil asks, “Hello Simon, since you travel everywhere, I thought you could help me with this question: where in Latin America has the most potential to support an upscale (U.S. quality) veterinary hospital / dog kennel? I’d like to start such a business abroad.”

Candidly, the best market right now for upscale pet care is in Asia, specifically mainland China and Taiwan. I was just recently in both Shanghai and Taipei, and the streets are lined with luxury stores selling high priced pet accessories, poodle perms, and gourmet doggy biscuits.

The level to which the Chinese and Taiwanese are spoiling their pets is mind-boggling… so there’s serious opportunity there.

If Latin America is where you’d like to end up, though, I’d focus on Panama, Brazil, and Chile. The pet culture is not as extreme in these countries, however the growing middle class and disposable income levels certainly warrant higher quality services.