IS This A Trade In Corn?

Coming into the USDA crop report I tried to make a game plan and come up with what would be the perfect scenario for an entry point in Corn. When a security of any kind gets killed for months going into an announcement like this, a lot of the bad news is likely priced in. The market is clearly expecting a bad number. I’m not going to sit here talking about corn inventories or even what the number was; that doesn’t even matter to us. It’s the market’s reaction that we care about. The point is, we were looking for the aggressive sellers to take the bad news and keep selling. In this scenario, the market would put in a new 4-year low while momentum diverges positively. An immediate reversal higher is our confirmation of a bottom.
Normally the market never does what you hope, but I’ve seen this scenario play out too many times to not hope and anticipate that it will develop. It might be one of my favorite setups in fact. Sure enough, the announcement came out, the knee-jerk was lower, Corn made new lows, and then immediately reversed higher: 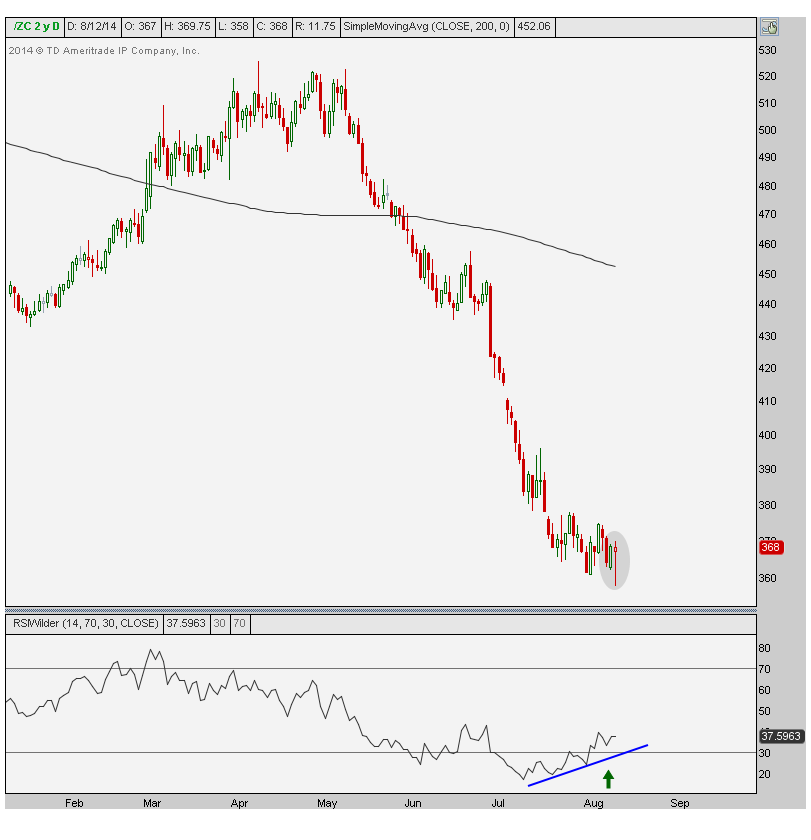 A candlestick like this coming off an announcement of this magnitude is the epitome of ‘sell the rumor buy the news’. The Japanese call this type of Candlestick a “Hammer”, because they say the market is “Hammering in a bottom”. Tuesday’s post announcement low is where I’d place my stop. The target is up near 420 which was support from January. We can go higher than that for sure, but that’s the first area we’re eying. With Corn at 366, this gives Corn bulls a very favorable risk/reward ratio, which is really all we care about.
Also look how far we are from the 200 day moving average. The mean reversion process just began I believe. Follow through higher on Wednesday would be very bullish in my opinion.
Please share this article
at 12:05 AM No comments: Links to this post

kingworldnews.com / August 12, 2014
Today an outspoken hedge fund manager out of Hong Kong warned King World News that the world is now set up for what he called “the mother of all Great Depressions.”  William Kaye, who 25 years ago worked for Goldman Sachs in mergers and acquisitions, also discussed the physical markets for both gold and silver as well as what investors should expect going forward in those key markets.

Kaye:  “The key to the precious metals markets right now is silver.  The market in physical gold may seem, for the time being, to be in balance, but this is not the case in the silver market which seems to be broken….

BioMarin Pharmaceutical Inc. develops and commercializes biopharmaceuticals for serious diseases and medical conditions in the United States, Europe, Latin America, and internationally. Its commercial products include Naglazyme, a recombinant form of N-acetylgalactosamine 4-sulfatase enzyme for the treatment of mucopolysaccharidosis VI; Kuvan, a proprietary synthetic oral form of 6R-BH4 used to treat patients with phenylketonuria (PKU), a metabolic disease; Aldurazyme used for the treatment of mucopolysaccharidosis I, a genetic disease; Firdapse used to treat Lambert Eaton Myasthenic Syndrome, an autoimmune disease; and Vimizim, an enzyme replacement therapy to treat MPS IVA, a lysosomal storage disorder.
Take a look at the 1-year chart of BioMarin (Nasdaq: BMRN) with my added notations: 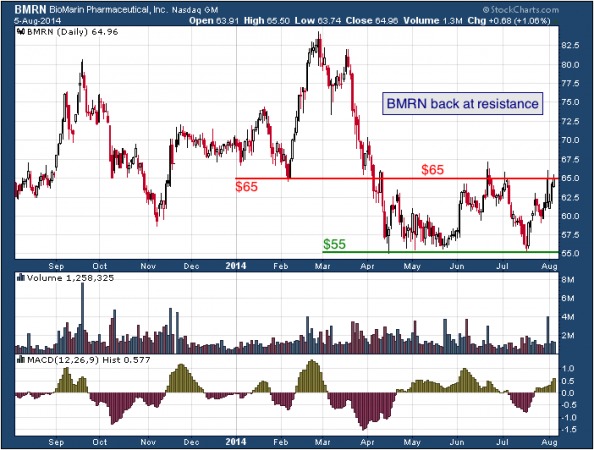 With the exception of a brief fake-out in June, BMRN has been range bound since April. Over that period of time the stock has formed a clear resistance at $65 (red) that had also been a prior support. In addition, the stock has also created a key level of support at $55 (green). At some point the stock will have to break one of the two levels that the consolidation has created.

The Tale of the Tape: BMRN has clear levels of support ($55) and resistance ($65). The possible long positions on the stock would be either on a pullback to $55, or on a breakout above $65. The ideal short opportunity would be on a break below $55.
Please share this article
at 12:03 AM No comments: Links to this post

Is Gold About to Stage a Massive Breakout?

Quietly, and with little fanfare, Gold has begun to make some very interesting moves…
The precious metal has been in the doldrums sine 2013, moving sideways throughout the last 18 months.
However, today Gold looks like it wants to move higher: 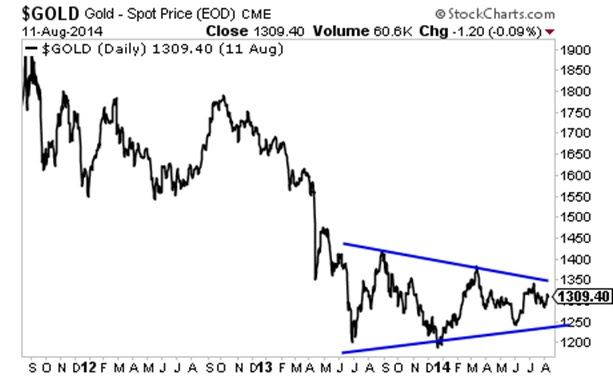 Global Recovery, We Have A Problem: Dubai Hotel Occupancy Plunges To 18-Year Lows

zerohedge.com / by Tyler Durden on 08/12/2014 15:15
Despite Dubai’s recent explosion of speculative fervor (stocks and real estate), and the world’s leaders demanding we believe that global recovery is accelerating, there is yet another awkward anecdotal data point that suggests things are are far from ‘normal’. As Bloomberg reports, Dubai’s hotels had the lowest occupancy in at least 18 years in July, standing more than half empty, as more rooms were created and demand declined, according to research firm STR Global.
READ MORE
Please share this article
at 12:03 AM No comments: Links to this post