Invest in What China Needs to Buy: Don Coxe

The Energy Report: You are famous for taking the long view of the political economy, Don. What does the machinery of history tell us about the likely future of the Western world as measured against the newly industrializing economies, including China, India and Brazil?

Don Coxe: For the first 17 centuries of the so-called Christian Era, China and India together generated about 40–50% of global gross domestic product (GDP), due to the sheer size of their populations. But when they did not participate in the Industrial Revolution, the relatively small number of people living in Europe and North America were able to take over 70% of global GDP. The East stagnated.

Then, in 1978, a momentous event changed the world—Deng Xiaoping was invited by the British Labor Party to visit Great Britain. Labor was facing an election against Margaret Thatcher, whom they regarded as the devil incarnate. The party wanted to show Deng how awful things were for the British working class. However, he was astounded at how well the working class lived. When he returned to China, Deng changed the slogan on the Mao posters from "to work is glorious" to "to be rich is glorious." It was the most important editorial alteration in the history of the world. Then, he put politics to work liberating the entrepreneurial spirit of the Chinese people. (more)

Goldcorp Inc. engages in the acquisition, development, exploration, and operation of precious metal properties. It primarily explores gold, silver, copper, lead, and zinc. The company's principal mining properties include Red Lake, Porcupine, and Musselwhite gold mines in Canada; Peñasquito gold/silver/lead/zinc mine, and Los Filos and El Sauzal gold mines in Mexico; Marlin gold/silver mine in Guatemala; Alumbrera gold/copper mine in Argentina; and Marigold and Wharf gold mines in the United States. Goldcorp Inc. was founded in 1954 and is headquartered in Vancouver, Canada.

Please take a look at the 1-year chart of GG (Goldcorp, Inc.) below with my added notations: 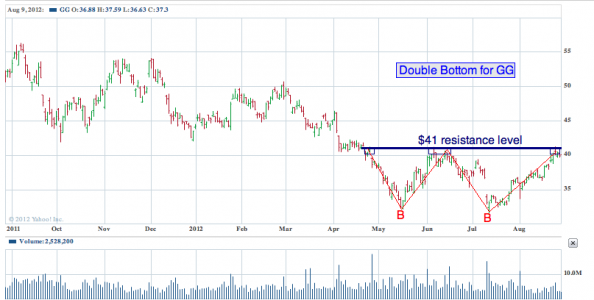 After trending lower for most of the year, GG has formed what appears to be a Double Bottom (red) price pattern. The pattern is as simple as it sounds: Bottoming, rallying up to a point, selling back off to a similar bottom, and then rallying back up again. As with any price pattern, a confirmation of the pattern is needed. GG would confirm the pattern by breaking up through the $41 resistance (navy) that has been created by the Double Bottom pattern.

Keep in mind that simple is usually better. Had I never pointed out the Double Bottom pattern, one would still think this stock is moving higher if it simply broke through the $41 resistance level. In short, whether you noticed the pattern or not, the trade would still be the same: On the break above the key $41 level.

The Tale of the Tape: GG seems to have formed a Double Bottom price pattern. A long trade could be entered on a break above the $41 resistance with a stop placed under that level.
at 12:06 AM No comments: Links to this post

Will Expert David Morgan Call the Bottom on the Metals Market Again?

David Morgan, editor of The Morgan Report, expects gold to top $1,800/oz and silver to top $40/oz by the end of the year and both to take off from there. In this exclusive interview with The Gold Report, Morgan shares the logic behind his predictions and identifies several companies set to benefit from the end of the precious metal doldrums.

he Gold Report: What’s your current outlook on metals, the economy and the general market indexes?

David Morgan: My outlook is bullish on the metals both short and long term. I think that the bottom is in for the mining equities as well as for the metals themselves. More and more people will realize that there’s really no way out of this debt-based monetary system, whether it is about the U.S. reserve currency, the Eurozone or anywhere else on the planet that uses a fiat currency. There’s a problem here and it can’t be resolved. We’re going to see more pressures to the commodity sector in general, particularly the precious metals.

TGR: In mid-May you called the bottom in the mining shares and the bullion. What leads you to make such bold calls and maintain a high degree of accuracy?

DM: I use my own indicators that come from a lot of experience. A couple of other things also keyed me. One was that the sentiment was so bad that it was screaming we are “at the bottom.” Another was that there were a few days where the volume was very, very high and there was no real buying pressure. It was short covering. Short covering at a bottom is a good indicator that the smart money or the professional money is moving out of the market. In other words, they shorted for a very long time. They made their money, they’re getting out and are covering their positions.

All these factors led me to decide to stick my neck out, which is part of the job I do, and say that this looked like a bottom to me. My experience of over 30 years in this business tells me that it usually takes about three months to confirm a bottom. I’m pretty convinced that I did get the bottom; now it’s just wait and see another month or so if I’m correct on the metals themselves.

TGR: What prices are you predicting for silver and gold?

DM: I’m looking for silver to be above $35/oz and perhaps as high as $40/oz by the end of the year. I think we could see gold at about $1,800/oz by the end of the year. We still have four months ahead of us this year and with the fix that the global economy is in, a lot of people are going to come back into what they call the fear trade, and that will lift the metals. Once gold reaches a couple of upward resistance lines, you’ll see a lot of momentum players come to the market as well for a quick trade.

Rule also warned about the ongoing bank run in Europe: “… about 5% of the retail deposits in Spanish banks have been pulled out of the banks in the last two weeks.” But first, here is what Rule had to say regarding the gold market: “I’ve looked at a lot of speculation concerning the reason for the increase in the gold price in the last two or three weeks. There are a lot of factors involved. Obviously there is some fear involved, and what I think is really healthy, in terms of the price increase, is that it doesn’t seem to have come about from an increase in institutional demand, that is from hot money.”

“It doesn’t seem to be a momentum or greed trade, but rather a fear trade. These are concerns about international bank solvency or concerns about what might happen at Jackson Hole, or what might happen with quantitative easing. I think it’s constructive that the gold price is moving on fundamental news, rather than the way it moved in 2010, which was a response to institutional momentum buying.

This will lead to a much stronger gold market….

Why War Is Great for Energy

“War.
What is it good for?
Absolutely nothing – Say it again…”
Edwin Starr

I beg to differ. War is fantastic for energy stocks. Even the threat of war can send energy prices soaring.

So for energy investors, war is far from a good-for-nothing – it is great for portfolios.

The best part is that the human race is incapable of getting along. That means there is always one potential war or another sitting just around the corner.

Today is no exception. Think about it – why is Brent oil trading at US$114 per barrel, only a few percentage points away from its highest levels in the last three years? It certainly isn’t because of strong European demand, or a soaring Chinese economy, or a pile of Buy orders from Japanese traders.

It’s because Iran wants to build a nuclear weapon, and that means that Israel is threatening war (again). This isn’t a hypothesis or a fear-mongering tactic – it is a fact. An Israeli attack would prompt Iran to immediately lace the Strait of Hormuz with mines, blocking passage for the 13 tankers carrying 15.5 million barrels of crude that usually transit the strait every day. Oil prices would shoot up overnight.

About this week’s show:
- QE or not QE? That is the question
- Gold will give the answer to that early
- Game Over, but they just keep playing

Spain has suffered the worst haemorrhaging of bank deposits since the launch of the euro, losing funds equal to 7pc of GDP in a single month.

Data from the European Central Bank shows that outflows from Spanish commercial banks reached €74bn (£59bn) in July, twice the previous monthly record. This brings the total deposit loss over the past year to 10.9pc, replicating the pattern seen in Greece as the crisis spread.

It is unclear how much of the deposit loss is capital flight, either to German banks or other safe-haven assets such as London property. The Bank of Spain said the fall is distorted by the July effect of tax payments and by the expiry of securitised funds.

Julian Callow from Barclays Capital said the deposit loss is €65bn even when adjusted for the season: “This is highly significant. Deposit outflows are clearly picking up and the balance sheet of the Spanish banking system is contracting.”

Economy secretary Fernando Jimenez Latorre said Spain is in the eye of the storm right now with the “worst falls” in economic output yet to come in the second half of the year.

Meanwhile, the Spanish statistics office said the economic slump has been deeper than feared, with lower output through 2010 and 2011. The economy slid back into double-dip recession in the third quarter of last year, three months earlier than thought.

As HELOC Delinquency Rates Hit A Record, Are Student Loans Next?

Today the Fed released its quarterly report on household debt and credit, which merely recaps already public data but with some additional nuances. While the focus of the report is on the purported ongoing consumer deleveraging, what has to be highlighted once again is that the bulk of the consumer “deleveraging” is primarily at the mortgage debt level, which as the NY Fed’s blog has shown, and the reason why we quotation marks above, is because the majority of the debt ‘reduction’ for the third year running is due to debt discharge, i.e., forced reductions in debt arising out of default, bankruptcy and other contract termination events, and not due to actually generating incremental equity (cash) used to repay debt.