Silver Set To Soar Against Everything? 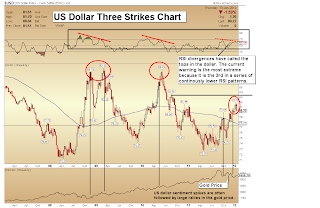 The "Chart of the Day" is Chubb (CB), which showed up on Friday's Barchart "All Time High" list. Chubb on Friday rallied to a new all-time high of $70.99 and closed up 0.95%. TrendSpotter has been Long since Nov 30 at $67.44. In recent news on the stock, Barron's on Jan 4 ran a favorable article saying that an expected improvement in Chubb's commercial-underwriting business should allow Chubb to continue to outperform its peers. Credit Suisse on Dec 7 initiated research coverage on Chubb with an Outperform and a target of $75. Chubb Corp, with a market cap of $19 billion, is principally engaged in the property and casualty insurance business.

Gonzalo Lira : Time to leave America it has become a dictatorship worse than Chile under Pinochet

Gonzalo Lira told Max Keiser that he is now recommending to just leave the United States of America , America has become a dictatorship he says worse than that of chile under Pinochet under which he lived himself , now the American government thanks to NDAA can detain any US citizen indefinitely without charge no jury no nothing , the American government can detain or even kill anyone he likes ...we're in a downward pile because of the big government bureaucracy and bills like Dodd-Frank for the regulation of banks which collapsed the housing market, starting with normal - sub prime loans. Which also puts more regulation on business which outsources jobs to China. And Classick﻿ I'm afraid that this bill is complete crap. What they are proposing is Martial Law and Martial Law is only in a set area which you are warned. And the bill of rights accounts for everything and anything
at 12:05 AM No comments: Links to this post

IMAX shares poised for a breakout

Get in on shares of IMAX before the Dark Knight Rises this summer.

In fact, there are quite a few decent movies coming out in 2012 that should help IMAX's earnings out in 2012. Check out this list:

Not all of these were duds, but a lot were. Just check out this list of most anticipated movies from 2011 and look how their ratings turned out. That's not to say that there won't be any duds in 2012, but I for one am much more excited about some of these upcoming releases.

Fundamentally, IMAX is looking pretty sound these days compared to recent years. The company has finally started making a profit and its paid off the bulk of its debt, while continuing expansion into international markets (such as China).

The IMAX chart is looking great, with price action in a nice rising channel. Look for a breakout to above $25 in the coming months.

18 Stocks that Could Have BIG Upside -- and Limited Downside

So I'm going hunting for extreme PEGs -- stocks with P/E ratios less than one-fifth of the earnings growth rate, or a PEG below 0.2. The reason that number is so low: Every stock in this group has a forward P/E ratio of less than 10 and is expected to post earnings per share gains of at least 40% from the current fiscal year into the next fiscal year.

On my first pass through this screen, I found many energy drillers and financial services stocks. I've culled them from the herd, as they're subject to energy prices, interest rates and other exogenous factors that may render profit forecasts moot. What's left? We have 19 companies that sport rock-bottom valuations AND are expected to generate robust profits in the next fiscal year.

Near the bottom of the list, you'll find a grouping of airline stocks. Delta Airlines (NYSE: DAL), United Continental (NYSE: UAL), Spirit Airlines (Nasdaq: SAVE) and U.S. Airways (NYSE: LCC) all appear quite inexpensive. It's worth noting that the earnings forecasts assume current oil prices of around $100 a barrel. It appears as if these carriers could handle even somewhat higher oil prices and still remain nicely profitable. Looked at another way, any pullback in oil prices could lead to even higher profits -- and lower P/E ratios for these stocks.

Investors may be warming up to airline stocks, despite the fact that oil prices are near a 52-week high. The AMEX Airline index, which had fallen from around 45 in early 2011 to just 27 in late September, is already back up to 35. This chart is an important snapshot of what's happened with airline stocks. The downturn of 2008 forced many carriers to become very lean, and they may now be in the strongest financial shape they've been in a very long time..

A few other stocks look like solid profit rebounders in the coming fiscal year. Take Sanderson Farms (Nasdaq: SAFM) as an example. The company is one of the nation's largest chicken producers and is quickly seeing its stars align. Feed costs have begun dropping and poultry prices have been firming. That won't be much in evidence in fiscal first quarter results (which ends in a few weeks) as Sanderson is still working off its chicken feed bought in 2011 at much higher prices. Yet after that, profits may soar. Analyst think per share profits can rise more than 1,000% sequentially to around $0.95 a share in the quarter ended April. That should set the stage for more than $3.50 in EPS in fiscal (October) 2012, and perhaps as high as $6 a share in fiscal 2013. Not bad for a company that lost $4 a share in the fiscal year ended last October.

Goldman Sachs considers Sanderson Farms to be one of its top ideas (a member of what the firm calls its "Conviction Buy List") and they "encourage investors to see the forest through the trees: the wheels are in motion for a robust earnings recovery as supply cuts drive sharply higher EPS through 2013." Depending on the direction of feed prices and poultry prices, they see shares moving up from a current $52 toward a range of $60 to $75.

The set-up for mining firm Couer D'Alene (NYSE: CDE) is pretty intriguing. The company has some mines coming online this year that should help boost output of silver and other metals. That's why per share profits are expected to double to around $3 this year. Silver trades for about $30 an ounce right now, well below the high of $48 seen last spring. If silver simply made a move halfway to that former peak, to $39, then Couer D'Alenes' per share profits could move closer to the $4 mark in a year or two.

Meanwhile, shares have traded down from $36 last spring to a recent $27. Also, shares likely have solid downside support in the event that silver prices fall. The company's assets (primarily its mines) are worth roughly $2.1 billion, not far below the stock's current $2.4 billion market value.

Risks to Consider: These lofty growth forecasts are based on assumptions that the U.S. economy will stay afloat in 2012. Any shockwaves emanating out of Europe could lead analysts to lower their profit forecasts for many of these stocks.

Action to Take --> The market appears to be hitting its stride, and investors are back in a buying mood. Still, it pays to be somewhat defensive in case the mini-rally peters out. These low PEG stocks should thrive in a rising market (thanks to their high earnings growth rates) but should also hold their own in a down market (thanks to those low P/E ratios).

How You Can Avoid The Greater Depression–Episode 154

I’m up in Vancouver British Columbia for the Vancouver Resource Show. There will be nearly 600 mining companies telling their stories. Please forgive the less than stellar audio quality, I’m away from the studio. This is more of a personal Triple Lutz Report. I wanted you to know about my family and how they weathered the Great Depression.

If Doug Casey is correct and this is the Greater Depression, then this story may have value for you. While both sides of my family suffered during the depression, my mother’s side prospered and my father’s side became impoverished. This is the tale of two families living just three miles apart and how they were affected by the Crash of 1929 and the economic collapse that lasted for over 15 years. No World War II did not end the depression, it simply changed the terms.

Whether you survive and thrive of go off the cliff is really up to you in final analysis. I hope this helps.

Please send your questions/comments to KL@KerryLutz.comor call us at 347-460-LUTZ.

This Emerging Market Could Deliver a +28% Gain

If global stock markets are turning bullish after last year's lackluster performance, emerging markets could be the biggest gainers. In the most recent bull market, emerging markets gained an average of 176%, outperforming developed economies by almost double.

If history repeats itself, this could be the best way to profit...

My 26-week ROC strategy is signaling MSCI South Africa (NYSE: EZA) could be the top performing emerging market ETF in the coming months.

Right now, EZA is trading near its long-term support level. But I think that's about to change...

The weekly chart of EZA below includes the 26-week ROC at the bottom. The indicator became oversold in September and has since been in an uptrend. In the last week, the ROC broke above its 20-week moving average. This confirms that ROC is in an uptrend and is a bullish indicator pointing towards higher prices.

The chart also shows how to limit risk in this trade. Once broken, resistance generally becomes support and will often limit the down side in a trade. Resistance near $57 on EZA halted price advances in 2009. Once the price broke above that level, $57 became support. Prices have bounced off that price four times in the last 18 months. A close under $57 would show that support has failed and it's time to exit the trade.

EZA is a great way to add international exposure to your portfolio. Emerging markets tend to move the fastest in bull markets. The chart shows a bullish pattern and the potential reward is more than twice as high as the risk.