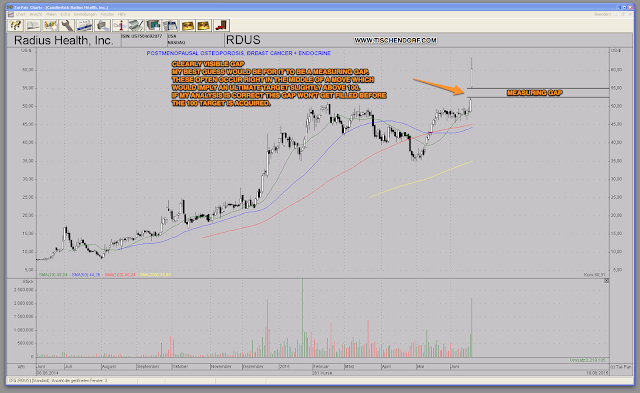 Assuming RDUS will close strong, this will leave a strong white candle on the chart and a clearly visible gap. My best guess would be for it to be a measuring gap. These often tend to occur right in the middle of a move. In this case this would imply a technical price target slightly above 100$. If my analysis is correct the gap won’t be filled until the target is acquired. Right now, for position traders RDUS is a great stock to hold. Especially if you entered using the stop buy I suggested earlier. As long as the stock stays strong and acts well, ride the uptrend.

Changyou.com Limited develops and operates online games in the People’s Republic of China. It is primarily involved in the development, operation, and licensing of massively multi-player online games, which are interactive online games that might be played simultaneously by various game players; Web-based games, which are played over the Internet using a Web browser; and mobile games that are played on mobile devices and require an Internet connection. The company also owns and operates Web properties and software applications for PCs and mobile devices, including the 17173.com Website, an information portals for game players in China; the wan.com Website, a games portal that provides a collection of Web games of third-party developers to game players; RaidCall, which provides online music and entertainment services, primarily in Taiwan; and the Dolphin Browser, a gateway to a host of user activities on mobile devices, with its users in Europe, Russia, and Japan.
Take a look at the 1-year chart of Changyou.com (NASDAQ: CYOU) below with added notations: 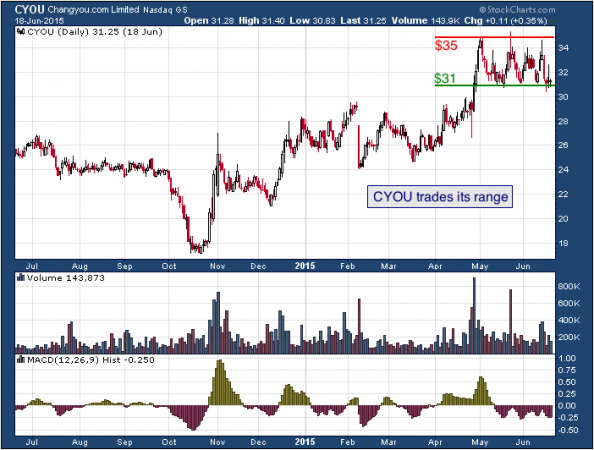 After rallying nicely from mid-October until the beginning of May, CYOU has been trading mostly sideways over the last 2 months. During the sideways move the stock has formed a common pattern known as a rectangle. A minimum of (2) successful tests of the support and (2) successful tests of the resistance will give you the pattern.
CYOU’s rectangle pattern has formed a resistance at $35 (red) and a $31 support (green). At some point the stock will have to break one of the two levels.

The Tale of the Tape: CYOU is trading within a rectangle pattern. The possible long positions on the stock would be either on a pullback to $31 or on a breakout above $35. The ideal short opportunity would be on a break below $31.
Please share this article
at 12:03 AM No comments: 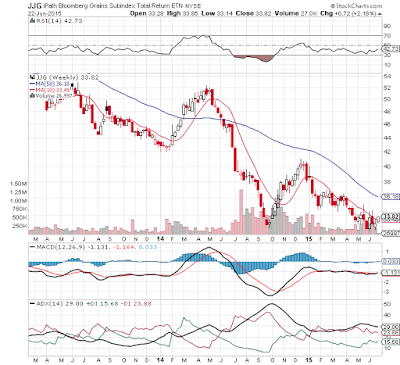 You could trade the more active, nearby grain futures contracts and roll them upon expiration. But, if you aren’t willing to do that, there are always agriculture and grain indices ETNs that are more user friendly. Check out the DJ-UBS Grains Total Return Sub-Index ETN (JJG), or the MLCX Grains Index TR ETN (GRU), both of which track the performance of agriculture futures.

The good news is that agriculture futures prices are currently quite low, so it’s a good time to get in.

But don’t wait for Mother Nature to do her thing, because she can be fickle.
Look out for future GIEWS reports, which monitor the condition of major food crops across the globe to assess production prospects.

It would also be smart to check out the newly developed FAO-Agricultural Stress Index System, which detects agricultural areas with a high likelihood of water stress (drought) at the global level. 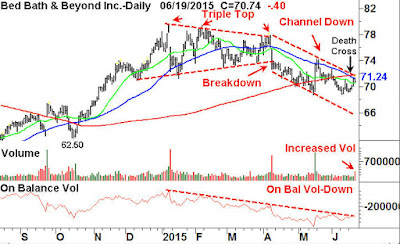 Bed Bath & Beyond Inc. (BBBY) — This retail chain operates 1,500 superstores that sell domestic home furnishings. Competition in a difficult retail environment, a higher tax rate, unfavorable exchange rates, high employee benefit packages, the encroachment of e-commerce and price transparency are squeezing operating margins.
Credit Suisse Equity Research noted EBITDA growth was only 1.3% in the fourth quarter of fiscal 2014 (ended Feb. 28) and down for the full year. Credit Suisse and S&P Capital IQ recently lowered their earnings and price targets on BBBY stock.
Management’s goal is to open 30 new stores with the intent of increasing square footage by 1% to 3%, but the risk of an unexpected decline in consumer spending and the trend toward online shopping makes this approach risky.
BBBY stock broke down in early April from a triple-top at about $78. The stock descended into a channel down with resistance at its 50-day moving average, now at $71.24, and the descending resistance line.
Last week, the 50-day moving average crossed down through the 200-day moving average, a long-term negative signal called a death cross, ending a rally at the 50-day moving average on Friday.
On-balance-volume has been trending lower since January, indicating the bear market in BBBY stock is far from over. Insider selling has been high for the past 12 months and very high in the past three months. Nasdaq.com shows 21 insider sells representing 307,707 shares in the past 90 days and zero insider buys.
Sell BBBY stock if you own it. Traders may want to sell shares short at $71 with a downside target of $63 for an 11% profit.
Please share this article
at 12:03 AM No comments: