Charts show this trade will 'explode' in 2014: URA

Uranium is an area that investors have mostly stayed away from over the last few years. The media doesn't like talking about it either. How many articles or T.V. spots do you see regarding the uranium trade these days? This is very different than late 2010 and early 2011 when uranium was the hot place to be and the cool thing to talk about. The stocks in that space were doubling and tripling in just a few months. But then came the Fukushima Tsunami in March of 2011 that sent the entire Uranium sector tumbling down. They all crashed, losing 60-80%.

We've studied market crashes of all kinds going back a hundred years. The common denominator in all of their recoveries is time. How much time depends on the nature of the decline, and ensuing market reaction. In the case of uranium, we've seen a very healthy sideways consolidation over the past several years. A good example of that is Cameco Corporation (CCJ), which is the "Exxon Mobil" of the uranium space. Over the last 3 years, the stock has traded in a sideways range putting together a nice base to potentially explode out of this year. I think it happens soon, setting this sector up to be one of the hottest places to be in 2014.  (more)

Remember when banks were exposed manipulating virtually everything except precious metals, because obviously nobody ever manipulates the price of gold and silver? After all, the biggest "conspiracy theory" of all is that crazy gold bugs blame every move against them on some vile manipulator. It may be time to shift yet another conspiracy "theory" into the "fact" bin, thanks to Elke Koenig, the president of Germany's top financial regulator, Bafin, which apparently is not as corrupt, complicit and clueless as its US equivalent, and who said that in addition to currency rates, manipulation of precious metals "is worse than the Libor-rigging scandal." Hear that Bart Chilton and friends from the CFTC?
More on what Eike said from Bloomberg:


The allegations about the currency and precious metals markets are “particularly serious, because such reference values are based -- unlike Libor and Euribor -- typically on transactions in liquid markets and not on estimates of the banks,” Elke Koenig, the president of Bafin, said in a speech in Frankfurt today.


Actually, what makes the most serious, is that precisely because they are on liquid markets means they implicitly have the blessing of the biggest New Normal market maker of call - the central banks, and their own "regulator" - the Bank of International Settlements (hello Mikael Charoze).


“That the issue is causing such a public reaction is understandable,” Koenig said, according to a copy of the speech. “The financial sector is dependent on the common trust that it is efficient and at the same time, honest. The central benchmark rates seemed to be beyond any doubt, and now there is the allegation they may have been manipulated.”

Bafin has also interviewed employees of Deutsche Bank AG as part of a probe of potential manipulation of gold and silver prices, a person with knowledge of the matter has said.


We wonder how long until this particular investigation is stopped based on an "executive order" from above, because Bafin is now stepping into some very treacherous  waters with its ongoing inquiry of gold manipulation: what it reveals will certainly not be to the liking of the financial "powers that be."
Please share this article
at 12:05 AM No comments: Links to this post 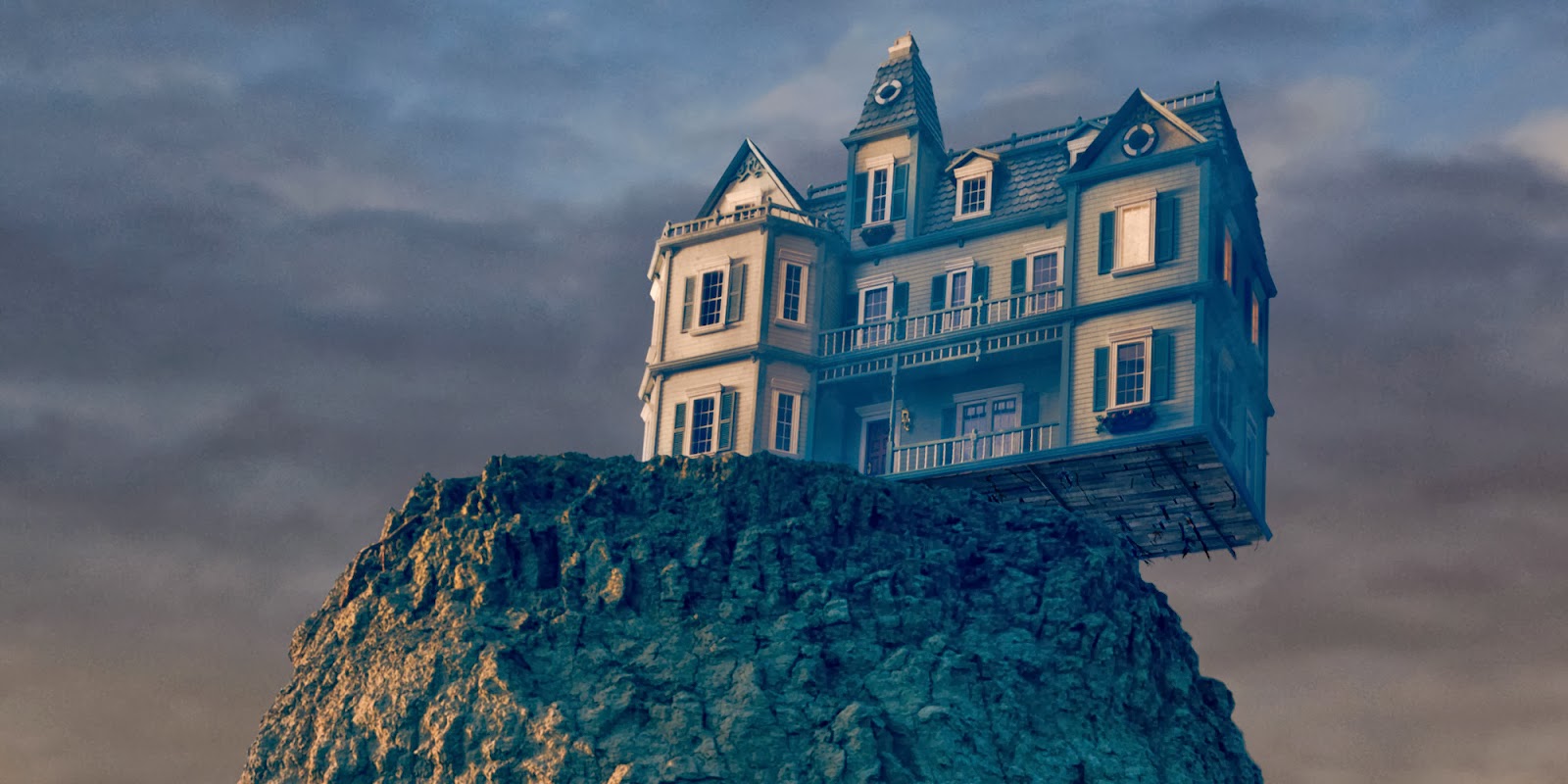 A recent parade of articles discusses the prospects of a pending Canadian housing bust. For example, The Globe and Mail reports Bank CEOs ‘should be worried’ about real estate.


Ed Clark, Toronto-Dominion Bank’s outspoken chief executive officer, is playing the contrarian card one more time, publicly arguing that he and his fellow bank CEOs should be cautious about the country’s heated real estate market.
While he isn’t worried about a full-blown bust, Mr. Clark believes chief executives simply can’t ignore warning signs in the market – particularly the sudden run up in prices for real estate of all stripes. “If you run a bank, you should be worried about it,” he told the audience at a bank conference in Toronto.

The only thing I am confused about is why Ed Clark isn’t concerned about a “full-blown bust”.  (more)

Is Now the Time to Buy Gold Miners? :GDX 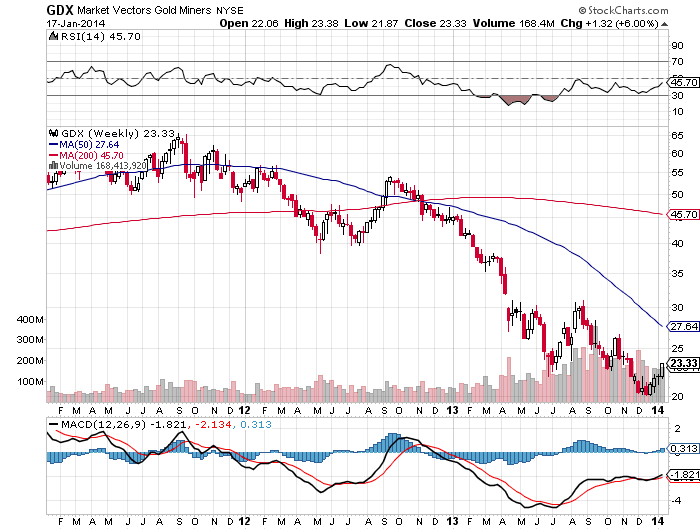 Gold and gold mining stocks didn't get much love in 2013. In fact, the yellow metal and the companies that dig it from the ground had a very, very bad year. Nearly everyone bailed out of this decade-long darling in 2013, and for a variety of very good reasons.

In late December, I wrote about several of the reasons why everyone was bailing on gold and the miners, which included the first real sell-off in the sector after a huge five-year bull move. That run was, in large part, fueled by the Federal Reserve and its easy money policies. A near-zero interest rate policy and massive quantitative easing via an $85-billion-per-month bond-buying scheme caused a lot of capital to maneuver into the safety and inflation trade that gold represents.  (more)

Barron: “The big news this week and for the last couple of weeks has been the uranium market. Some very, very critical things have happened that KWN readers should be aware of….
“First of all, the country of Niger, in Africa, which provides 7% of the world’s uranium, shut off all production in December. It has not been resumed. The company running these operations is AREVA, the French mining company.
The French government has really been holding a gun to the company’s heads, and they want them to pay massively high royalties that don’t make any sense, and would make the two mines they run unprofitable. So it’s a bit of a standoff and as a result it’s just shut down. So there has been no activity there whatsoever. Again, that’s 7% of the world’s uranium supply which is offline.
Keith Barron continues @ KingWorldNews.com

kingworldnews.com / January 17, 2014
In one of his most important and powerful interviews, today billionaire Eric Sprott warned King World News that we are going to see a failure to deliver gold and lawsuits that will emerge from banks manipulating the gold market.  The Canadian billionaire also included an astonishing chart.  Below is what Sprott, Chairman of Sprott Asset Management, had to say in part I of this remarkable interview series.
Eric King:  “Eric, are we looking at a possible gold shortage here?  As you know, paper claims vs available physical gold have skyrocketed to 112 to 1 — absolutely amazing.”
Sprott:  “Well, I think it’s ridiculous that dealers have something like 11 tons of gold on the Comex.  11 (tons reiterated).  China imports about 100 tons a month.  11 tons is nothing….
READ MORE
Please share this article
at 12:03 AM No comments: Links to this post

I always tell my customers to health and happiness. Because without your health there is no way to attain wealth.  A yearly physical along with blood work could save your life one day.  The same can be true when it comes to your investments. Failing to recognize long term danger zones could wreak havoc on your portfolio!  In this piece we will be looking at long term charts in order to identify key technical swing points in order to make technically sound buy and sell decisions!  Let's get started:
Weekly E-Mini S&P500