The most valuable resource in a mining company is often the people. Good management can attract the right investors and add value regardless of the market. In this interview with The Gold Report, Marin Katusa, founder of Katusa Research, shares his litmus test for which mining companies are worth his hard-won dollars and which ones he is avoiding for the foreseeable future.
The Gold Report: You seem much more positive about gold right now than when we talked in June. Based on the chart you have on Katusa Research of the U.S. dollar versus gold and in the wake of the Federal Reserve’s inaction at its last meeting, what’s your thesis for gold for the rest of 2015?
Marin Katusa: As I said in the spring, I don’t see the Fed raising rates this year. Using some simple game theory, for the Fed not to raise rates is the best decision. I still believe that. Gold has fared well compared to the price of the U.S. dollar, better than any other hard commodity. Gold is holding its own. The reality is, because the commodity markets are down, very little capital is being invested to replace the production of gold.
Continue Reading at TheAuReport.com…

Rudi Fronk: All That Glitters With Seabridge $SA Is Gold 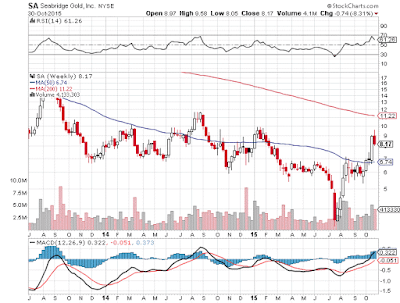 Introduction: Rudi P. Fronk, Chairman and CEO of Seabridge Gold, has over 30 years experience in the gold business, primarily as a senior officer and director of publicly traded companies. In 1999 Mr. Fronk co-founded Seabridge and has served as the company's CEO since that time. Prior to Seabridge, Mr. Fronk held senior management positions with Greenstone Resources, Columbia Resources, Behre Dolbear & Company, Riverside Associates, Phibro-Salomon, Amax, and DRX. Mr. Fronk is a graduate of Columbia University from which he holds a Bachelor of Science in Mining Engineering and a Master of Science in Mineral Economics.

Anthony Wile: Nice to sit down with you, Rudi. I wrote an editorial recently entitled "Why Most Gold Stocks Are Bad Investments." In it I indicated that very few gold miners actually understood the economics of what they were investing in. I pointed out something I believe deeply, which is that "any company that is in the business of digging real value out of the ground only to exchange it for paper currency is doing a disservice to its shareholders." I'd like you to comment on this.(more)
at 12:03 AM No comments:

Alasdair Macleod is Ready to Get On With the Collapse

While the semiconductor equipment maker has been steadily moving higher since late September, it is much closer to its 52-week low than high.

Of course, we know the old saw about a rising tide floating all boats doesn't apply when one of those boats has a hole in its hull. A stock with problems such as a serious earnings shortfall or bearish technical trend may not move up just because its sector does.

But Applied Materials has already proven it is a sound "boat." Its chart is displaying positive momentum indicators and increasing cumulative, or on-balance, volume. And shares rallied Wednesday as analysts at Nomura raised their opinion to "buy" from "neutral" with a $22 price target.

What's more, the current rising trend completed a double-bottom pattern similar to that seen in many stocks and sectors at the August and September lows. This "W" shape tells us selling pressures eased on the second dip, and the move above the center of the "W" tells us demand was able to overcome supply at that price. 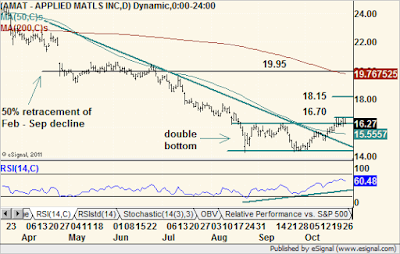 But we should always step back and see how the pattern fits into the larger context. For that, we can look at a weekly chart below. 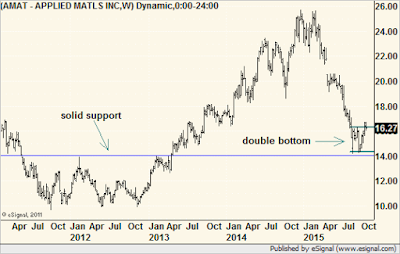 Support from the top of a long basing pattern in 2011 and 2012 near $14 is just under the double-bottom. Demand typically picks up at such support levels, and we can feel confident this is what happened with AMAT given the recent upside breakout from the double-bottom.

We can also use the double-bottom to forecast a likely upside target. By measuring the pattern's vertical height and projecting that up from the breakout point we get an objective of $18.15.

Should AMAT keep moving higher, the next target -- an integral multiple of the first -- would be in the $19.95 area, more than 20% above the current price. This is also the 50% retracement of the February-to-September decline and close to the 200-day moving average. Remember that it is not unusual for a stock to move slightly past its major averages, so we use them as guides, not hard support and resistance levels.

I recommend waiting for the current week-long trading range to break up through $16.70 before taking a position to reduce the risk of a false breakout. But given the charts we reviewed today, it looks like this boat will continue to rise for the next few weeks.