As the world awaits the Fed’s decision, today a 42-year market veteran told King World News there will be no tapering and that the gold will soar “after the Fed has surprised the market tomorrow.”  Greyerz also warned KWN that to further complicate matters for the Fed, there is a “major shortage of physical gold” ahead of their decision.  Below is what Egon von Greyerz, who is founder of Matterhorn Asset Management out of Switzerland, had to say.

Greyerz:  “Eric, it is important to consider what the truly important factors are that will determine what will happen to the world, its people, and to the global economy.  If we look around, what do we find?  We find a world that is financially, politically, and morally bankrupt.  (more) 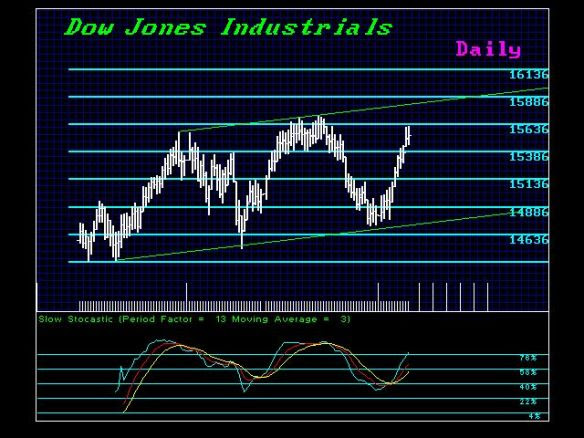 So far, everything has still followed the turning points. We got the fall in the US Share Market into early September and the bounce has been very strong. This is what I was warning about previously. The majority were very bearish and the shorts were lined up counting their profits. That provided the fuel for the surge rally. This market is still bullish for now and the possibility of doubling in a Phase Transition into 2015.75 remains unchanged – albeit not yet confirmed.
We can see even technically, the Dow fell but remained within the uptrend channel even on the daily level. There is ABSOLUTELY no spike high and that is required for a major bubble top. This has been the fundamental pundits who think they will not be fools this time and keep trying to sell the market. That is the very fuel we need for a breakout to the upside. That will eventually cause them to flip as they begin to buy the rally pronouncing this is a new era.
Continue Reading at ArmstrongEconomics.com…
Please share this article
at 12:07 AM No comments:

The Madison Square Garden Company is engaged in sports, entertainment, and media businesses in the United States. It operates through three segments: MSG Media, MSG Entertainment, and MSG Sports. The MSG Media segment produces and develops content for various distribution platforms, including content originating from its venues. This segment consists of MSG Networks, its regional sports networks; and Fuse, a national television network dedicated to music. It also manages interactive Web sites, social networking sites, and mobile applications for its properties. The MSG Entertainment segment presents or hosts live entertainment events, such as concerts, family shows, performing arts, and special events in its venues, as well as creates, produces, and/or presents live productions. The MSG Sports segment owns and operates sports franchises, including New York Knicks, New York Rangers, New York Liberty, and Hartford Wolf Pack. This segment also promotes, produces, and/or presents an array of live sporting events at its venues, such as professional boxing, tennis, college basketball, professional bull riding, wrestling, gymnastics, and track and field meets, as well as the NFL Draft.
Please take a look at the 1-year chart of MSG (The Madison Square Garden Company) below with my added notations: 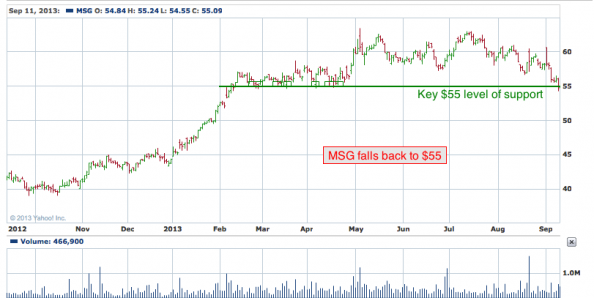 MSG had held a very important level of support of $55 (red) back in February, March and April. The stock then rallied higher and peaked in the $63 area a couple of times. Now, MSG is approaching $55 again and that might provide another bounce higher, but the stock's recent downward move could be setting the stock up for a breakdown.
The Tale of the Tape: MSG has a key level of support at $55. A trader could enter a long position at $55 with a stop placed under the level. If the stock were to break below the support, a short position would be recommended instead.
Please share this article
at 12:05 AM No comments:

MUST WATCH: How the Shadow Gov’t Took Over After Assassinating JFK — Neil Gallagher

Neil Gallagher is the only man alive who not only was a close personal friend of John F. Kennedy, but fought the cartel associated with the assassinations of JFK, RFK, and MLK, as a member of Congress. Miraculously, he was able to continue fighting, unlike others who joined him in the struggle. Even more miraculous, he is still alive today to tell the tale. Here he offers his personal insights into how the shadow government took over, following the assassination of JFK.
Please share this article
at 12:04 AM No comments:

The Buyer’s Market in Housing Is Over

You don’t usually find clearance sales on real estate. But the last two years are beginning to look like the deal of a lifetime for anybody who bought a home. 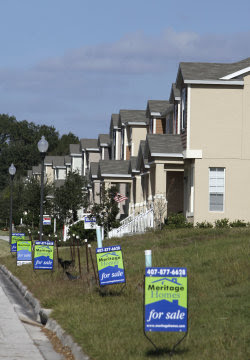 That dynamic may now be changing as home prices surge by double-digits, interest rates rise and the whole housing bust recedes into the past. The latest sign that the buyer’s market is ending is a convincing improvement in foreclosures. Sales of foreclosed homes now account for about 12% of home sales, according to research firm FNC. That’s down from 17% a year ago and 37% in 2009, the low point of the housing bust. At the current pace, foreclosures will fall back to typical pre-recession levels within a year or so, signaling something like a return to a normal housing market.
That’s an important economic indicator that also has a tangible effect on buyers and sellers in the real world. An epidemic of foreclosures has been one of the factors pushing prices down to depressed levels and keeping sellers on the sidelines. With prices as low as they’ve been, many people who bought within the last five or even 10 years couldn’t sell their homes without taking a loss. That stunted the whole economy by preventing people from moving to better areas where there might be more job opportunities and discouraging first-time home owners from moving up to bigger, nicer homes.  (more)