Quanta Services, Inc. provides specialty contracting services to the electric power, and oil and gas industries in North America and internationally. The company’s Electric Power Infrastructure Services segment provides network solutions comprising design, installation, upgrade, repair, and maintenance of electric power transmission and distribution infrastructure, and substation facilities. The company’s Oil and Gas Infrastructure Services segment provides network solutions to customers involved in the development and transportation of natural gas, oil, and other pipeline products. The company’s Fiber Optic Licensing and Other segment designs, procures, constructs, maintains, and owns fiber optic telecommunications infrastructure, as well as licenses the right to use these point-to-point fiber optic telecommunications facilities to its customers.
Take a look at the 1-year chart of Quanta (NYSE: PWR) with the added notations: 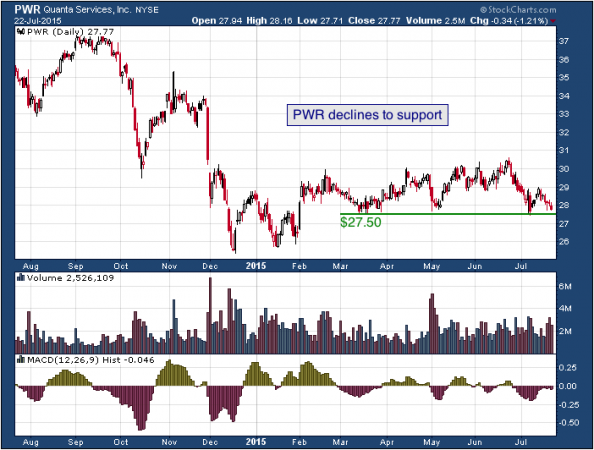 PWR chopped its way lower into the end of 2015, but the stock finally bottomed in December. Since leveling out a bit, PWR has found support near $27.50 (green) several times. Now that the stock appears to be falling back down to that support level again, traders could expect some sort of bounce. However, if the $27.50 support were to break, lower prices should follow.

The Tale of the Tape: PWR has an important level of support at $27.50. A trader could enter a long position at $27.50 with a stop placed under the level. If the stock were to break below the support a short position could be entered instead.
at 12:03 AM No comments: 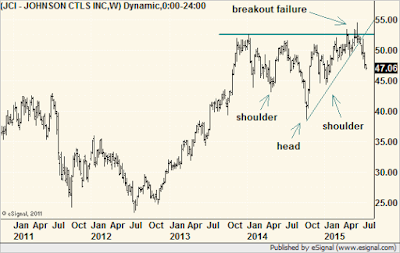 This maker of automobile interior systems and building heating, cooling and management systems broke down last month through its intermediate-term trendline, as seen in the chart below.

That came on the heels of the June 10 breakout failure, also seen below, sparked by news the company was considering spinning off its automotive businesses. Initially the market viewed the spin-off as a positive for the company, but it was a one-day wonder rally. The next day, the stock started to fall, and it has not looked back since.

In the face of a series of lower highs and lower lows, the downside trend break and a drop back below the 200-day moving average, we can safely assume the bears are in charge here.

That suggests there is more downside ahead.

For some additional background, Johnson Controls is in the consumer discretionary sector and its representative exchange-traded fund, the Consumer Discretionary Select SPDR (NYSE: XLY), appears to be ready to turn lower.

This may surprise traders, as the fund recently broke out to the upside from its 2015 trading range. However, volume before, during and after the breakout was in serious decline, a textbook bearish warning.

With that in mind, let's look to see how low JCI can go. The weekly pattern in the chart is a somewhat choppy version of an inverse head-and-shoulders with small troughs surrounding a larger decline last October. Since the breakout failed, we can look for the entire pattern to be erased as the stock falls. That means a trip down to the $39 area from its current position above $46.

Of course, there may be counter-trend moves along the way as the stock trades within a short-term trend channel. But overall, the technicals support lower prices in a gradual move lower.