Yesterday financial stocks stepped up to the plate again, and with a late-inning rally they managed to overcome much of Monday’s losses. Conspicuous among the winners was Bank of America (NYSE:BAC), which rose 4% to $8.02.

Nine of the S&P 500’s 10 sectors gained ground following the year’s first triple-digit decline of the Dow. The catalyst for the recovery was the revision of several government reports that turned out slightly better than when originally released. And European markets bounced early in the day as optimism grew that the Greece debt swap will go as planned.

In my Daily Market Outlook, I’ve noted several times that group rotation has been excellent and encourages us to believe that the indices will continue their plodding advance. The meaning of the term “group rotation” is that some industries and sectors will perform better than others at different times.

Since the market’s break from the confines of S&P 1,100 to around 1,225, all of the indices appear to be in a straight line up. But day after day, we see that the differences in the market’s breadth are relatively small.

For example, yesterday, on the NYSE, there were 2,436 stocks up and 651 down. A broad-based move like the present one is an indication that the economic cycles are working efficiently with some industries doing well in one period followed by others doing better later.

The two major industry groups driving the current run from the dregs of autumn have been the technology and financial stocks. But on days of profit-taking, the more defensive groups, like utilities, pharmaceuticals and income-oriented investments, have taken up the slack.

Conclusion: Group rotation is an important ingredient if stocks are to continue to move higher. So far, the rotation in this market should be scored an A+, and so is its potential for much higher prices
at 12:07 AM No comments:

Switzerland Wants Its Gold at Home and Out of Fed Hands 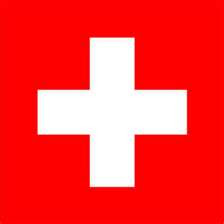 Earlier we reported that a German Parliamentary Budget Committee will be considering relocating Germany's 3,396.3 tons in gold reserves, which total to 42% of Germany's money held as savings in reserve.
Apparently Chavez moving Venezuela's gold sparked a worry that "first mover advantage" may be an extremely valuable principle when considering the case of safe guarding the national wealth from multiple paper owners claiming the same gold bars. It's the same old game of musical chairs that will leave someone—or some country—holding the bag.
Switzerland is the next massive gold owner within a very short period of time to consider moving custody of their gold onshore. As part of the Swiss Initiative to Secure the Swiss National Bank’s Gold Reserves "Rettet Unser Schweizer Gold", launched recently by four members of the Swiss parliament, the Swiss people would have a right to vote on 3 basic rights:
1: Swiss gold held physically in Switzerland
2: Prohibition from selling any more gold reserves
3: Requirement to hold at least 20% of assets in gold
While the gold is not yet in motion in either the case of Germany or Switzerland, it did take over 2 months for Chavez to move the 160 tons back on shore over multiple trips. Of course these political initiatives may be delayed, however these announcements are as grand as it gets when it comes to protecting the integrity of national sovereignty.
The next step is for China to make a second surprise announcement about how the gold they have quietly been accumulating over the past 3 years has doubled or tripled their total holdings, laying the groundwork for amore potent alternative to the dollar as an intermediary in trade.
at 12:06 AM No comments:

Yamana Gold (NYSE:AUY) — This large-cap Canadian-based miner of gold properties in the Americas has been recommended several times by me, first as one of the Top Stocks to Buy for November, and then as a Trade of the Day on Jan. 10, at under $15.

And this gold miner is a favorite of Wall Street analysts, as well, with 10 of 15 having a “buy” or “hold” on the stock.

The deep correction in gold may have run its course with the “smart money” beginning to buy again. The fundamental analysts, like Credit Suisse, have raised their target from $18 to $21, because of the company’s increase in gold reserves, its ability to meet estimates, and its increased dividend.

AUY’s chart pattern has evolved into a powerful bull channel with clearly defined support and resistance lines. Our buy under for AUY is $16 with a target of $22.

Bob Chapman - Dr Deagle - The Nutrimedical Report - 07 March 2012 : the public owned pensions are mostly underfunded , get out of equity get out of cash get into GOLD , the only safe investment out there.
at 12:05 AM No comments:

Chart of the Day - Allergan (AGN)

The "Chart of the Day" is Allergan (AGN), which showed up on Wednesday's Barchart "All Time High" list. Allergan on Wednesday posted a new all-time high of $91.08 and closed up 2.51%. TrendSpotter has been Long since Feb 29 at $89.59. In recent news on the stock, Botox-maker Allergan on March 7 won a court injection preventing its rival Merz from selling a similar product because of allegations of theft of trade secrets. RBC Capital on Feb 8 said that investors should buy Allergan shares ahead of the company's R&D day on March 28. RBC Capital reiterated its Outperform trading on Allergan. Allergan, with a market cap of $27 billion, is a provider of eye care and specialty pharmaceutical products throughout the world with products in the eye care pharmaceutical, ophthalmic surgical device, over-the-counter contact lens care, movement disorder, and dermatological markets.

The Key Numbers for Gold & Silver

The Key Numbers – Let’s start with the 200-day moving average, which usually acts as support (or resistance) for gold and silver. Gold did not remain below its 200-DMA, at $1,678, for more than a moment and it quickly bounced back. (As of 5:00 Thursday morning, gold is over $1,700) But that is not surprising. Gold has held firm above its 200-DMA for most of this bull market. 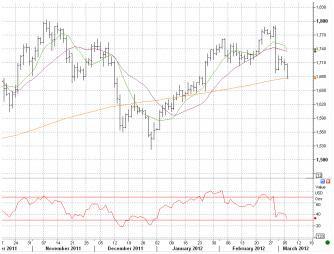 For silver, the key support/resistance number is $34. Silver was $34.06 early this morning and rising. We are now back on safer ground, with gold above $1,700 and silver above $34. Let’s see if they hold through the weekend. The bull market in gold and silver are not over – the bullion banks (especially JPMorgan) were desperate to cover their huge short positions. They were scared to death that gold and silver were on the brink of breaking out above $1,800 and $38, which would have propelled their prices much higher. But after just a few days, prices have turned back up.

It’s always the same drill. Gold and silver are hit with “waterfall” drops and the fall is fast and furious, but the gains are slow and methodical. What takes weeks or months to accomplish on the way up is taken away in minutes or days. But they always come creeping back – at least since the onset of the bull market in 2001. (more)