Why Are U.S. Stocks and The U.S. Dollar Rising? 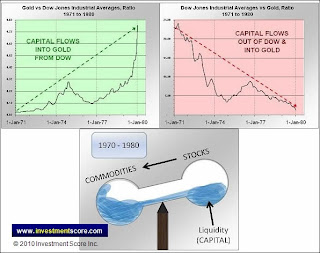 So why are these markets rising day after day, month after month? Before we answer that question we want to address the following error that we think the typical investor makes. Turn on the news and an investor will hear the exact reason the market rose or dropped on any given day. How can this be possible? When we hear these explanations we ask ourselves:
at 4:32 AM 1 comment: Links to this post

Rogoff Says Greece May Not Be Europe’s Last Bailout

“It’s more likely than not that we’ll need an IMF program in at least one more country in the euro area over the next two to three years,” Rogoff, a former IMF chief economist who has co-authored studies of financial and sovereign debt crises, said in a telephone interview. “The budget cuts needed in Europe in many countries are profound.” (more)

Stocks may soon suffer a plunge, because the economic rebound stems from massive government stimulus that is unsustainable, says Kirby Daley, strategist at Newedge Group.

"Right now we're enjoying the confluence of the implementation of massive stimulus, massive monetary stimulus as well as fiscal, around the world," he says.

"I don't believe we have 30 percent upside from here, I certainly believe we are at risk of 30 to 40 percent downside."

Many investors are enthusiastic over the global rebound from recession, including a 5.6 percent expansion in the United States during the fourth quarter. (more)
at 3:51 AM No comments: Links to this post

9 Years' Worth of Homes 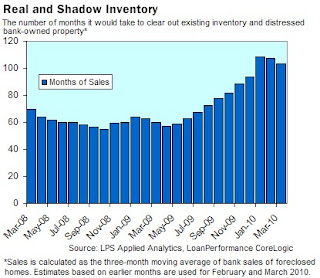 Economic theory has it that prices tend to rise when demand exceeds supply. But when the potential inventory of homes for sale by banks -- which is aside from the properties that homeowners and builders might also be looking to unload -- is equivalent to nine years' worth of demand, as detailed by Real Time Economics in "Number of the Week: 103 Months to Clear Housing Inventory," that suggests those who see signs of a recovery in the residential real estate market should probably be thinking about checking into rehab: (more)
at 3:38 AM No comments: Links to this post

The recovery is picking up steam as employers boost payrolls, but economists think the government's stimulus package and jobs bill had little to do with the rebound, according to a survey released Monday.

In latest quarterly survey by the National Association for Business Economics, the index that measures employment showed job growth for the first time in two years -- but a majority of respondents felt the fiscal stimulus had no impact.

NABE conducted the study by polling 68 of its members who work in economic roles at private-sector firms. About 73% of those surveyed said employment at their company is neither higher nor lower as a result of the $787 billion Recovery Act, which the White House's Council of Economic Advisers says is on track to create or save 3.5 million jobs by the end of the year. (more)
at 3:29 AM No comments: Links to this post

Circulation continues to drop severely at U.S. newspapers, though the rate of decline slowed from the previous six-month reporting period.

That's a slight improvement from April through of last year, when average weekday circulation dropped 10.6 percent from a year earlier and Sunday circulation fell 7.5 percent.

Even so, the top 25 newspapers in the country showed some huge circulation losses. (more)

The big news in the economy last week was new home sales jumped 27% in March. It was the best monthly increase percentage wise since John F. Kennedy was in office. What the mainstream media did not tell you was new housing starts jumped up from a very low level– like the lowest level in history! This chart from shadowstats.com illustrates the point:
This is one of the many reasons why shadowstats.com founder, John Williams, says the economy is “bottom bouncing.” That is exactly what the chart shows. In early 2006, housing starts were more than 2 million–now they are just over a half million. Housing starts are down around 75% from the peak. Does this look like a big turnaround to you? Please do not get fooled into thinking we are on the brink of a real recovery. Williams says, “The U.S. economy remains in an economic depression, which is about to intensify anew. . .” (more)
at 3:21 AM No comments: Links to this post

Bankers Said ‘Anything’ to Get High Rating, S&P Ex-Analyst Says

Just past midnight on May 3, 2005, Standard & Poor’s analyst Chui Ng e-mailed co-workers to broker a solution to demands by Goldman Sachs Group Inc. bankers that he said violated two or more of the ratings company’s internal guidelines.

Goldman Sachs was adding $200 million in debt at the “last minute” to a $1.5 billion bond pool called Adirondack Ltd., Ng wrote. That meant the New York investment bank would originate 13 percent of the pool itself, two-and-a-half times the 5 percent limit set by S&P.

Goldman Sachs also balked at Ng’s request to pay in advance for an insurance policy known as a credit default swap, which was being used to create the additional debt obligation. (more)

“This will be the biggest story of 2010,” says our macro adviser Rob Parenteau, “but Wall Street economists and investment analysts will be the last to really get it. The European Monetary Union had several design flaws from the get-go.

“We presume the path of least resistance will be a maxi-depreciation of the euro, on the order of another 20–30% decline in the exchange rate of the euro.”

“It begins, but does not end, with Greece (actually, it began with Latvia and Ireland, but that is another story). Band-Aids to save Greece, no matter how graciously offered by the legitimately concerned German politicians, cannot and will not paper over the cracks in the rest of the peripheral eurozone nations -- which we will refer to as the GIIPS, since that seems to be the more politically correct version of the more porcine moniker.

“The math of the fiscal balances in the GIIPS is such that partial default or partial public debt renegotiation is all but inevitable. We would not touch GIIPS’ public debt until this becomes evident to more professional investors and until the potential haircuts (principal reductions) can be plausibly quantified.

“All else on the way to public debt default is shadowboxing, mostly for public political consumption only. IMF or eurozone loans or fiscal assistance only accomplish the extend-and-pretend wash/rinse/repeat cycle we have seen policymakers turn to one too many times during the recent financial and economic crisis.” Agora Financial