House Prices Still Have Another 10%-20% To Fall, Says Gary Shilling

A year ago, house prices finally stopped collapsing after two years of brutal declines. Over the following few quarters, moreover, they actually rose. This led many observers to conclude that the housing bottom had been reached and that we were headed for a v-shaped bounce.

Gary Shilling, head of economic research firm A. Gary Shilling & Co., thinks house prices still have another 10%-20% to fall. Just as bad, Gary thinks this fall will happen over the next three years, meaning that house prices won't bottom until 2013. Most people think prices have already bottomed, or will bottom later this year or next.

Why is Gary so bearish? (more)

Christopher Whalen: Banking Crisis Is Far From Over

The banking crisis isn’t near an end, despite the recent improvement in earnings, says Christopher Whalen, managing director of Institutional Risk Analytics.

“There are still a lot of bad loans out there,” he told Newsmax.TV Money.

“We’ll see banks shrink over the next year or two, because they will be writing off more bad loans than they’re making good loans. That’s going to have very negative implications for the economy.” (more)
at 12:23 AM 1 comment: Links to this post

FedEx slid 6 percent after saying rising health-care and pension costs will constrain earnings. Fannie Mae and Freddie Mac sank more than 38 percent as regulators ordered them to delist their stock from exchanges. BP Plc’s U.S. shares rose 1.4 percent, triggering a short-lived rebound in energy shares that briefly pushed the market higher, after agreeing to a $20 billion fund to pay damages from the Gulf of Mexico oil spill. 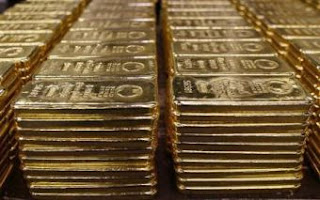 A weaker dollar was a contributing factor, with the ICE Futures U.S. Dollar Index down 0.4%, its lowest level in almost four weeks, and the euro up 0.6% against the dollar. (more)

“Both lines in the chart reflect investors’ risk appetite. Over the past year, retail investors have been piling into corporate bond funds. This inflow helped push bond prices up and yields down, allowing heavily indebted companies to refinance bank debt with proceeds from corporate bond offerings.”

“Lots of credit risk has shifted from the banking system to the bond market, where we have transparent, tick-by-tick pricing of credit (as opposed to ‘mark-to-myth’ accounting of bank loans).”

“The return of risk aversion will drive many investors toward higher-quality bonds (away from ‘junkier’ funds like HYG with higher yields and higher credit risk). This isn’t good for leveraged companies that rely on access to easy financing in the bond market.”
at 12:10 AM No comments: Links to this post

John Truman Wolfe reveals the Root Causes of the Worldwide Economic Crash, why it happened, where it is headed and what you can do about it.

Author and ex-banker John Truman Wolfe argued that the current world economic crisis is an international coup designed to take down the U.S. dollar and install a global financial machine. He named the Global Monetary Authority (GMA) as a "financial dictator of the planet" and the Bank for International Settlements (BIS) in Switzerland-- as the central bank for such entities as the Federal Reserve, Bank of England, and Bank of Japan. In fact, "all 55 central banks on the planet are members of and junior to the Bank of International Settlements," which he described as being above the law.

The idea of the amero replacing the dollar is a "red herring," said Wolfe-- "the global currency that is being rolled out as we speak is the SDR," a fiat currency of the International Monetary Fund. "The simple fact of the matter is that the fiscal economy of the United States has been dished off to a bunch of bankers in Basel, Switzerland," he declared. Their plan is to reduce the size of the US economy and remove the dollar as the world's reserve currency, he continued.

Further, the current crisis in such EU countries as Greece was planned so that the bankers can 'come to the rescue' and push for more international control mechanisms, he said. To counteract the international bankers, Wolfe suggested taking back the printing of money from the Federal Reserve (whom he called "fiscal vampires") and backing US currency with actual products and real estate. He also called for oversight of international banking organizations and their regulations.
at 12:06 AM No comments: Links to this post