TRIN Arms Index: The Market’s “Other” Panic Indicator Just Went Off The Charts

With indicators from macro-fundamentals (e.g. retail sales, core capex, inventory-to-sales) to market-oriented measures (VIX levels and backwardation, HY credit spreads, commodity prices)all flashing various colors of dead canary in the coal-mine red, we thought today’s colossal spike in the Arms (TRIN) Index was a notable addition.
An Arms Index value above one is bearish, a value below one is bullish and a value of one indicates a balanced market. Traders look not only at the value of the index, but also at how it changes throughout the day. Traders look for extremes in the index value for signs that the market may soon change directions. The Arm’s Index was invented by Richard W. Arms, Jr. in 1967. In essence, a sudden surge in the TRIN indicates a jump in trader lack of confidence, as everyone scrambles to either go long the 2-3 rising stocks, or to sell or short the biggest decliners, ignoring the bulk of the market..
Today’s move was far greater than “Black Monday’s market-halting crash:

As we noted previously, the Arms index is an indicator of market breadth essentially tracks lemming like momentum-chasing behavior with respect to volume… meaning today sawpanic-buying volumes which given that it was dip-buyers at the close, we suspect won’t end well…
at 12:03 AM No comments:

The massive liquidation of Treasury’s by the Chinese government has pressured Bond futures into testing support levels. On August 31st Bonds closed below the 100 DMA and today it so far has failed to hold onto any rallies. It is trading below the 100 and another close below this support level could lead to further price declines as we head to Friday’s Employment report. A good showing from Nonfarm payrolls could lead to more talk of a Fed rate hike at its next meeting during the week of September 15th. This would keep pressure on bonds and could lead to a test of the June lows at 147 11/32. MACD has crossed over to the downside and is heading towards the zero line. I look to buy October 150 puts in the Treasury Bonds for $600 with the idea that continued selling of Treasury’s by the Chinese and a possible rate hike by the Fed could lead to a further price decline in the bonds.
at 12:03 AM No comments: 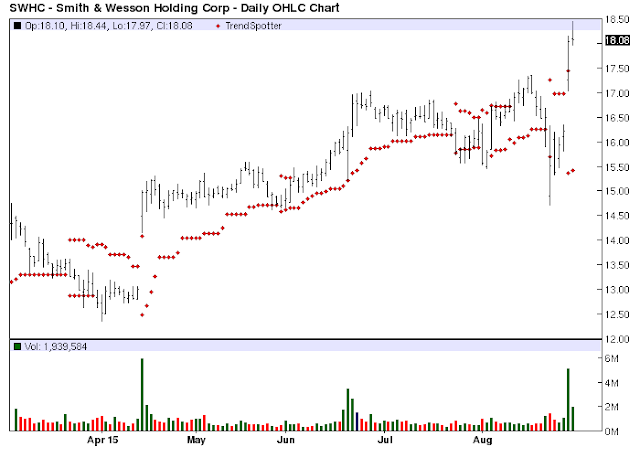 The Chart of the Day belongs to Smith & Wesson (SWHC).  I found the handgun Manufacturing stock by using Barchart to sort the Russell 3000 Index stocks for the  with the highest Weighted Alpha and then again for the stocks with a Barchart technical buy signal of 80% or better.  Last I used the Flipchart feature to review the charts.  The Trend Spotter signaled another buy on 8/28.

technical indicators:
Fundamental factors: The 100 day moving average vs price has been the most reliable technical trading strategy on this stock.
Although this is a stock bucking the current trend, I am still not buying anything in this uncertain market.
at 12:03 AM No comments:

Hess Corporation, an exploration and production company, develops, produces, purchases, transports, and sells crude oil, natural gas liquids, and natural gas. The company primarily operates in the United States, Denmark, Equatorial Guinea, the Joint Development Area of Malaysia/Thailand, Malaysia, and Norway. As of December 31, 2014, it had total proved reserves of 1,431 million barrels of oil equivalent.
Take a look at the 1-year chart of Hess (NYSE: HES) below with my added notations: 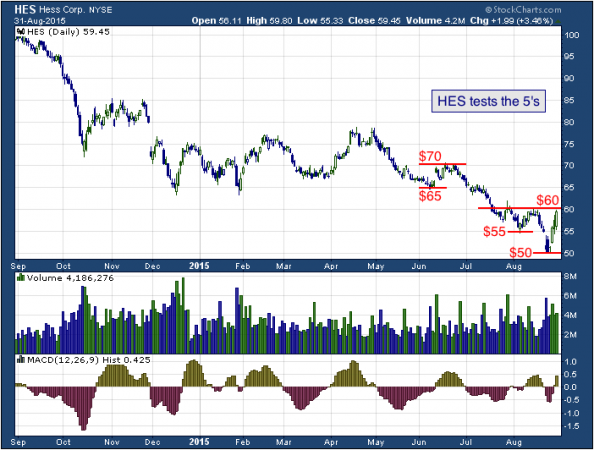 Overall, HES has been trending lower for the past 12 months. During the stock’s decline it has had a tendency to create key levels at the increments of $5 (red). For example, the current level of resistance is $60. Next, you can see that $65 was the previous support back in June, while recently the $50 and $55 levels have both been tested as support.

The Tale of the Tape: HES is approaching its key level of $60. A long trade could be made on a break above that level with a stop placed under it. Or, a short trade could be made at $60 with the expectation of a fall down to the next $5 level at $55.
at 12:03 AM No comments: