All of the numerics of our work change with each new data analysis run. This is the nature of dynamic, radical linguistics. Knowing this, we have kept the spyder programs focused on data gathering as the planet is moved closer to the tipping point at which building tension language shifts suddenly to release of tension language.

In spite of attempts at some level of officialdom to derail our progress and procedures (they have been f*cking with us pretty seriously here at HPH), we have been able to keep the spyders out and about, and i have just (November 3, too damn early in the AM) finished the examination of the numerics and the sums. We have new conclusions to report.

The new information comes in the form of some date changes, and two significant alterations to the release language period. First, the date changes.

The emotional tension level plateau is has grown. It had been previously forecast to start on the 8th, but now shows as beginning on November 5, 2010, at approximately 2:30 PM Pacific Coast Time (UTC + 8). Further, the plateau of building emotional tension now extends out further to the 14th of November instead of the 11th. This is the last building tension to accrue. Expect the level to stay maddeningly the same until the breaking point. (more)

Lindsey Williams told Jones his source – described only as a CEO in the Big Three Oil industry who traveled in Bilderberger circles – is suffering from terminal cancer and “spilled his guts” to him on particular details of the globalist agenda now unfolding.

Pastor Williams said the world is now at a critical phase in the globalist takeover scheme and that within the next few months we will witness the following important developments.

The globalists plan to use China and Russia to strangle America and Europe and eventually reduce both to third-world status.

Lindsey underscored the importance of a major oil export deal between Russia and China. “China reached a long-term deal to lend $25 billion to two Russian energy companies in exchange for an expanded supply of Russian oil, highlighting how the world’s No. 3 economy is using its financial muscle to lock up access to natural resources,” the Wall Street Journal reported in February. “Russia wants to secure customers and find a counterbalance to its dependence on Western Europe.”

According to Williams, trade between Russia and China will be not be conducted using the world’s reserve currency – at present the U.S. dollar – and this will further erode the value of the dollar and hasten its demise. In addition, the new trade will likely be used to bribe Europe into paying higher prices or possibly lose altogether its energy source provided by Russia.

This prospect become painfully obvious in January when Russia and Belarus failed to renew an agreement on crude oil export tariffs and a cut-off of oil threatened the European continent. (more)

Understanding the Trend with the Aden Sisters: The Long and Short of it

Pamela and Mary Anne Aden are the editors of the Aden Forecast. The Aden Forecast is one of the most influential investment publications in the world today. Its easy to understand format and powerful advice has consistently produced double-digit profits for subscribers in 21 out of the past 25 years…That’s an 83% batting average, one of the best and most consistent long-term track records in the business. www.adenforecast.com

US Pensions Reaching a Breaking Point?

Joe Weisenthal of Business Insider reports, Bombshell Pension Vote Is About To Sink California Hundreds Of Millions Deeper Into The Red:

California recently got its budget situation under control, but everyone figures the state is still in serious financial trouble.

And this news won't help, though it was probably inevitable.

According to the Sacramento Bee, CalSTRS (the big teachers retirement fund) is set to vote on Friday whether or not it should reduce its annual investment returns estimate from 8% to 7.5%, a move that will add hundreds of million to state debts (since the pension is guaranteed, and public taxpayers are on the hook).

That would be a huge decision, if they do it. 8% has been the level set since 1995 (talk about a whole other era), and artificially high return estimates are how the pension systems aren't (on paper) even more insolvent than they already seem.

Since we received reports from the CFTC that market players have made "repeated" and "fraudulent efforts to persuade and deviously control" silver prices, we have heard that HSBC Holdings Plc and JPMorgan Chase & Co. are facing an investor's lawsuit of placing "spoof" trading orders to manipulate silver futures and options prices in violation of U.S. antitrust law. The investor, Peter Laskaris, alleges that starting in March 2008, the banks colluded to suppress silver futures so that call options, or the right to buy, would decline, and put options for the right to sell would increase, according to the complaint filed late last week in federal court in Manhattan. The collusion was also intended to maintain prices at levels at which some options would expire as worthless.

WHAT SHOULD WE BE GETTING FROM OUR BANKS ?

Once upon a time the banks had a limited influence on our lives. If you needed a loan they were there to give it. They looked after your money, for a price, but most day to day transactions did not involve a bank, just cash. The same is still true in the underdeveloped world now. But in the developed world the banks and the banking system are part of every single aspect of our financial lives. They are the veins and arteries of the financial body, the economy. While they are healthy and supportive of the body the heart of the central bank and the government can work well. But when those veins and arteries harden, the entire body and heart have all-threatening problems. And the banking system seemed to be in good moral health until the credit crunch of 2007. Government stepped in to save the entire financial system by saving the banking system. (more)

Investors flooded into bonds and other fixed-income securities in the wake of the 2008 financial crisis, seeking a safe haven after the S&P 500 Index lost half its value between its peak October 2007 and the depths of March 2009.

But this has created its own bubble, executives said at the Reuters Wealth Management Summit.

"What's interesting is how overpriced some of the risk-minimizing assets have gotten," said Gordon Fowler, chief executive and chief investment officer for Glenmede, a Philadelphia-based wealth manager.

In January 2008, a 10-year Treasury note yielded 3.97 percent, while now it yields 2.59 percent, signaling that investors are willing to accept much lower returns on these instruments.

And since November 2008, junk bonds have risen more than 75 percent as measured by the Bank of America Merrill Lynch High Yield bond index, which accounts for both price changes and interest earned. (more)
at 12:18 AM No comments: Links to this post

Living Beyond Our Means: 3 Charts That Prove That We Are In The Biggest Debt Bubble In The History Of The World 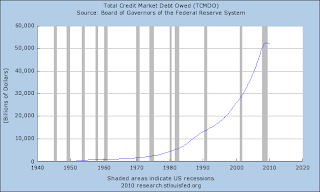 Do you want to see something truly frightening? Just check out the 3 charts posted further down in this article. These charts prove that we are now in the biggest debt bubble in the history of the world. As Americans have enjoyed an incredibly wonderful standard of living over the past three decades, most of them have believed that it was because we are the wealthiest, most prosperous nation on the planet with economic and financial systems that are second to none. But that is not even close to accurate. The reason why we have had an almost unbelievably high standard of living over the past three decades is because we have piled up the biggest mountains of debt in the history of the world. Once upon a time the United States was the wealthiest country on the planet, but all of that prosperity was not good enough for us. So we started borrowing and borrowing and borrowing and we have now been living beyond our means for so long that we consider it to be completely normal.

More on the Case of Silver: Casey Research

A new record in nominal terms, that is. To top the previous high in inflation-adjusted dollars, gold will have to approximately double from there.

Silver, however, has barely made it halfway back to its prior nominal high of $49.45 an ounce, achieved on January 21, 1980. In order to break into new territory in inflation-adjusted dollars (using the same CPI calculation methodology used in 1980), silver would have to rise to over $250 an ounce – more than ten times where it is today.

Here are some other useful facts about silver:

Due to the fact that silver’s industrial applications result in destroying the stuff, there is currently a total of only 1,234,590,000 “investable” ounces of silver in aboveground supplies. At $21 per ounce, the total value of aboveground silver comes to only about $26 billion. (more)

Chinese Professor on the Fall of the American Empire

The Standard & Poor’s 500 Index may rally as much as 16 percent in the next six months because yesterday’s election will stymie legislative initiatives in Congress, billionaire investor Kenneth Fisher said.

Equities have surged since July as odds that Republicans would take control of the U.S. House of Representatives increased. President Barack Obama and the Democratic Party pushed through reforms of the health-care and financial industries this year.

“Markets don’t like big sweeping actions,” said Fisher, who oversees more than $38 billion at Woodside, California-based Fisher Investments Inc. “Right now, every politician is chirping and burping and carrying on. It’s been in the interest of the Republicans running for office to talk down the economy. That goes away immediately after the election. Come June, you’ll see how quiet the political landscape will be -- very little legislation and a lot of baby kissing.”

Fisher’s optimism is based in part on history. Stocks average gains of 11 percent in the third year of U.S. presidencies and haven’t fallen since 1939 when the Dow Jones Industrial Average lost 2.9 percent, according to data since 1833 compiled by the Stock Trader’s Almanac. The fourth year, when elections are held in November, is second-best, with an average advance of 5.8 percent. (more)

What Happens When The World's Largest Oil Producer Runs Out Of Oil? 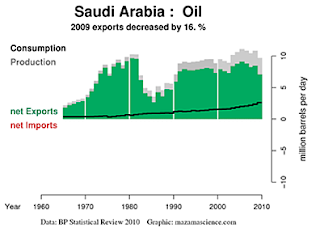 One of the inexorable results of the developing shortage of oil is that prices will rise. It is a prospect that does not particularly concern the Saudi Arabian Administration, Minister Al-Naimi having recently inflated the acceptable range for crude up to $90 a barrel, and JP Morgan has recently predicted an imminent rise to $100, a theme apparently now also taken up by Libya. Higher oil costs lead to higher fuel bills, and there is already a report in the United Kingdom that, in consequence , there may already be an increase in winter deaths.

Because demand for imported oil in countries such as China and India continues to increase at a steady rate, it will only be through the increase in production from the exporting nations that supply can meet such demand, and prices can be held at a relatively stable level. (more)