John Hathaway: Senior Managing Director & Portfolio Manager, Tocqueville Funds – John Hathaway has four decades of market experience and is known internationally for his writings about the U.S. economy, gold, silver, commodities and much more. John’s fund has been one of the top performing funds in the world for quite some time and was just awarded a 5-star rating by Morningstar. He is one of the most respected institutional minds in the world today regarding gold. Degrees from Harvard, University of Virginia and is a CFA charter holder. 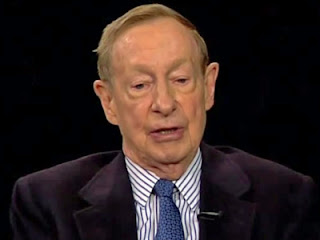 Barton Biggs, the storied hedge fund manager who runs Traxis Partners, recently had an interesting encounter recently over lunch with a Saudi businessman who explained to him the real motivations behind Saudi Arabia's ramp up in oil production and why oil prices will likely continue to fall as a result for an extended period of time.

It's all part of a plan hatched by the Saudi royal family, according to Biggs, who relays this conversation in a note just published by Itaú BBA. Biggs says he asked the man what his outlook for Saudi Arabia was in the medium and long term, and the man was particularly negative about this, even given the vast riches of Saudi Arabian oil wealth.

Here is what Biggs writes about his conversation with the Saudi man:

"You have to understand our geo-political equation and vulnerability,” he said calmly but intensely.
“Our two most dangerous enemies are Iraq and Iran. Both are Shia, and both are trying to destabilize the Arab world and our Sunni kingdom by funding terrorism. Our only weapons against them are our wealth and our oil. Their current vulnerability is their financial fragility. Their financial reserves are a fraction of ours, and they desperately need money to prop up their economies.

The ruling council has decided that over the next two years we have a brief window of opportunity to impoverish and weaken them by driving down the price of oil. Iraq and Iran need to produce and sell their oil at well over one hundred dollars a barrel. In the next twenty four months, we will gradually increase our production with the objective of breaking the price of crude down to sixty dollars a barrel.

The man also pointed out to Biggs the opportune timing of this plan from the Saudi standpoint:

"Don’t forget we have the wind at our backs because of Europe’s problems and the weak global economy. Under normal recessionary circumstances, we would be reducing production to maintain current prices. Instead, we will be flooding a weak market already suffering indigestion. You also should understand that Kuwait and the United Arab Emirates are with us. Royal families tend to stick together.”

Biggs, when posing the question to himself whether or not he believes what he heard from the Saudi man, says "maybe." He described the man as "very rich and presumably well-connected" but "not part of the extended Saudi royal family." He also notes that the Saudi plan as described to him could hit a lot of snags along the way, given the political hotspot the region is, with many competing actors and a dynamic plot.

However, Biggs sees some light in all of this, saying that if the scenario were to play out as described, it would essentially amount to "a giant tax cut, which is just what this sickly old world needs." And he ends his story with another interesting note:

Meanwhile the Saudis, perfectly reasonably, are hedging their bets. Last week they signed a $3 billion
contract with British Aerospace to provide the training jets and combat management of the new fighter jets that The Saudi Royal Air Force has purchased. The best, high-performance jets don’t protect you from suicide bombers, but obviously they could be handy in preventing the bad guys’ aircraft from blitzing your oil lifting installations or in a shooting war in the Gulf.

Crude Oil Will Fall Below $80 a Barrel in June: Suttmeier

Crude oil is literally a tick away from printing what would be its sharpest single-month retreat since 2008, a horrendous period when the U.S. and global economies were imploding, and crude oil went from $140 to $40 over the course of six months.

Is it really that bad out there right now? Will crude really behave so poorly?

For Richard Suttmeier, Chief Market Strategist at ValuEngine.com, the answer is yes -- and then some.

"I think between now and the end of June we'll test $79.83," the renowned technician predicts in the attached video, adding that even at that level, tropical storms and hurricanes would be the only catalyst to send prices back on the rise.

If he's right, $79 crude would not only mark a 7-month low but would also complete a 30% plunge from the recent top of $110 in late February.

Of course, as any energy analyst or trader will tell you, the crude crisis is not just the result of slack demand and economics, but is also the biproduct of a resurgent dollar. Regardless of whom you ask, the greenback's role in this crash has also been substantial.

For those who read Suttmeier's comments on the death cross and gold, a glance at crude charts shows a similar moving average cross is getting closer by the day, where the 50-day average is now within $5. Suttmeier says the 200 day average at $96.46 has become the new resistance.

Near term tests include the May payroll report this Friday and the FOMC meeting in 3 weeks.

CommVault Systems, Inc. is a provider of data and information management software applications and related services. The company develops, markets and sells a suite of software applications and services, primarily in North America, Europe, Australia and Asia, which provides its customers with data protection; data migration and archiving; snapshot management and replication of data; integrated source and target reduplication; e-discovery and compliance solutions; protection, recovery and discovery of data in virtual server environments; enterprise-wide search capabilities, and management and operational reports, remote services and troubleshooting tools. The company also provides its customers with a range of professional and customer support services. CommVault develops, markets and sells data and information management software applications under the Simpana brand.

To review CommVault's stock, please take a look at the 1-year chart of FL (CommVault System, Inc.) below with my added notations: 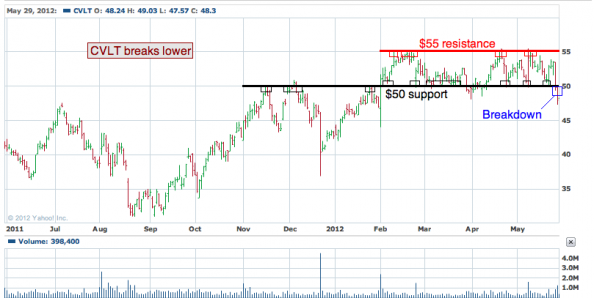 The Tale of the Tape: CVLT formed a Rectangle pattern and broke that pattern's support. A short position should be entered on a rally back up to $50 with a stop placed above $50. A break back above $50 would negate the forecast for a move lower.
at 12:04 AM No comments:

Loss of EU Billions Chump Change to US Trillions

A Look At This Week’s Show:
-Spanish Armada disaster redux–this time it’s bonds
-China and India buy 83% of all newly mined gold!
-”He who owns the gold, makes the rules”

Newmont CEO – China Doing Everything It Can to Get Gold

Today the CEO of Newmont Mining, one of the largest gold producing companies in the world, told King World News that China is doing, “everything they can to assemble a bigger gold portfolio.” Richard O’Brien, the CEO of $24 billion Newmont Mining, also said, “I believe inflation is going to rear its ugly head.” But first, when asked about China’s insatiable appetite for gold, O’Brien responded, “Obviously China is now both the world’s largest producer of gold, as well as the largest consumer of gold. Not one ounce shows up as legally leaving China. I think that’s a strong statement that the Chinese people and the Chinese government are looking to hold on to and expand their holdings of gold over time.”

Stratasys Inc. (NASDAQ:SSYS) — This maker of 3D printers and production systems for office-based rapid prototyping and direct digital manufacturing markets has had several upgrades by analysts since reporting Q1 revenues that were up 30% from last year. It was an impressive first quarter, but only equal to Zacks’s estimates, and it was noted that the company’s high-cost business model could run into stiff competition.

The long-term chart of SSYS looks like it has double-topped at $55, and so it is a candidate for short sellers or those who wish to nail down a profit. Note the gap at $36 to $40, which could close rapidly on a move under $47. The stochastic sell signal and the decreasing volume are also technical negatives.

Check with your broker for special rules regarding short selling and always protect against an unlimited loss by entering a stop-loss order.