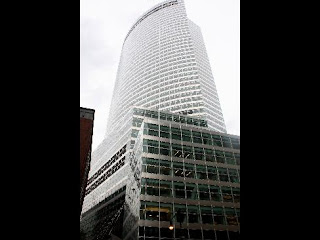 Hedge funds are shoveling money into stocks as individuals exit at the fastest rate in a year, a sign to professional investors that the Standard & Poor’s 500 Index is poised to extend its gains.

About $37.3 billion has been pulled from U.S. mutual funds since August, according to the Investment Company Institute. Hedge funds -- which lost half as much on average as the S&P 500 since stocks peaked in October 2007 -- boosted bets to the highest level since the end of that year in the third quarter and have kept buying, according to data compiled by Goldman Sachs Group Inc., industry consultants and Bloomberg.

“The more sophisticated investors are seeing the opportunity, but retail investors are still scarred,” said James Dunigan, the Philadelphia-based chief investment officer for the wealth management division at PNC Financial Services, which oversees $104 billion. “It suggests that the rally still has room to go.” (more) 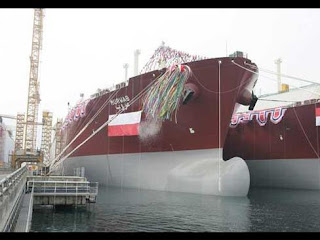 When Qatar’s biggest natural gas shipment to the U.S. arrived this month, it signaled to Barclays Capital Inc. and PFC Energy that this year’s worst performing commodity investment won’t recover in 2010.

Murwab, a Qatari liquefied natural gas tanker, carried the first shipment to the U.S. from the Persian Gulf nation since June 2008. Its cargo, enough to heat about 9 million homes for a day, added to the largest gas inventories for this time of year since at least 1994, Energy Department data show.

Rising supplies threaten to hurt the record-large $4.2 billion bet in the U.S. Natural Gas Fund LP, while traders hold 51 percent more options contracts to buy gas than they do to sell. The International Energy Agency warned of a glut that Qatar’s energy minister said may last until 2012. Wall Street’s consensus forecast for a 51 percent rise in U.S. gas futures to an average $6.09 per million British thermal units next year is too high, according to industry consultant Schork Group Inc. (more)

The bankruptcy of the United States is now certain

It's one of those numbers that's so unbelievable you have to actually think about it for a while... Within the next 12 months, the U.S. Treasury will have to refinance $2 trillion in short-term debt. And that's not counting any additional deficit spending, which is estimated to be around $1.5 trillion. Put the two numbers together. Then ask yourself, how in the world can the Treasury borrow $3.5 trillion in only one year? That's an amount equal to nearly 30% of our entire GDP. And we're the world's biggest economy. Where will the money come from?

How did we end up with so much short-term debt? Like most entities that have far too much debt - whether subprime borrowers, GM, Fannie, or GE - the U.S. Treasury has tried to minimize its interest burden by borrowing for short durations and then "rolling over" the loans when they come due. As they say on Wall Street, "a rolling debt collects no moss." What they mean is, as long as you can extend the debt, you have no problem. Unfortunately, that leads folks to take on ever greater amounts of debt… at ever shorter durations… at ever lower interest rates. Sooner or later, the creditors wake up and ask themselves: What are the chances I will ever actually be repaid? And that's when the trouble starts. Interest rates go up dramatically. Funding costs soar. The party is over. Bankruptcy is next. (more)
at 4:18 AM No comments: Links to this post

Consumers spent significantly less per person at the start of the holiday season this weekend, dimming hopes for a retail comeback that would help propel the economy early in 2010.

The lackluster spending could pressure retail stocks on Monday as some investors were looking for a stronger showing compared with a year earlier, when consumers were being hammered by the recession and credit crunch.

"There may be a bit of a pullback, a little disappointment," said Patricia Edwards, chief investment officer at Storehouse Partners.

While shoppers turned out in force as early as U.S. Thanksgiving Day on Thursday, many said they had zeroed in on highly discounted items, would buy only what they needed and would walk out of a store if they did not find a good deal. (more) 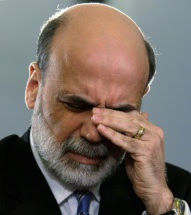 The head of the US central bank said Saturday he was "concerned" by some congressional proposals aimed at regulating the US financial system that infringe upon the powers of the Federal Reserve.

"I am concerned, however, that a number of the legislative proposals being circulated would significantly reduce the capacity of the Federal Reserve to perform its core functions," Federal Reserve Chairman Ben Bernanke wrote in an op-ed piece in The Washington Post.

He said some proposals considered by the US Senate as part of attempts to strengthen US government regulation of the financial sector would strip the Fed of all its bank regulatory powers. (more)

The Federal Deposit Insurance Corp. reported Tuesday that U.S. bank loans fell by $210.4 billion or 2.8% during the third quarter – the biggest drop since the FDIC started keeping records in 1984. Banks booked $2.8 billion in third-quarter profits, reversing a second-quarter loss of $4.3 billion. "We need to see banks making more loans to their business customers," says FDIC Chairman Sheila Bair. "This is especially true for small businesses."

"Until small businesses are able to borrow, we can't have a robust economy, because that's your largest source of jobs," says Richard Posner, a law professor at the University of Chicago and a federal circuit judge. The Small Business Administration has said that small businesses created 64% of new jobs in the past 15 years. (more)

The 7.9% year-on-year expansion prompted a leading government advisory panel to increase its estimate for the year to March 2010.

The figure easily eclipsed the consensus market forecast of 6.3%.

India's expansion was the strongest quarterly performance since early 2008.

Growth in the September quarter was led by manufacturing, which surged 9.2% while social spending climbed 12.7%, reflecting big government outlays to shield the economy from the international slump. (more)

Is Britain on the brink of financial armageddon? 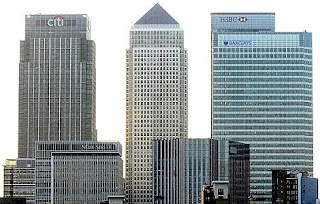 He's one of our top entrepreneurs who recently put all his investments into cash. The reason: He believes Britain faces bankruptcy. You may disagree with his bleak analysis but you can't afford NOT to read it

A year ago, the world reacted with astonishment as Iceland technically went bust. It seemed inconceivable that a modern democratic nation could have such parlous finances that only an emergency $6billion bail-out from the International Monetary Fund enabled its economy to keep functioning.

This week, we witnessed a similar crisis in the Middle East but on a far, far more dangerous scale, as Dubai effectively defaulted on £48billion of loans.

Unless its more prudent and oil-rich neighbour, Abu Dhabi, launches a rescue plan then Dubai - once a gilded monument to financial success - will effectively be insolvent. (more)