Would A Greek Default Drag Down The Stock Market? 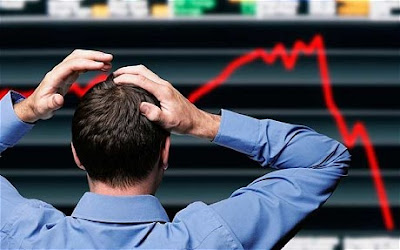 The world’s stock markets ended jittery last week, amid fears of a Greek bailout default, and the FTSE 100 is down to 6,730 as I write — 393 points short of the 7,123 it touched in April.
And now the latest round of talks between Greece and its EU taskmasters has failed.
Although progress was made over the weekend, there are apparently still “significant gaps” between the two sides’ positions. While the Greek government is prepared to make more cuts at the behest of EU lenders, the main stumbling block appears to be pensions — the EU and IMF want them cut, but the Greeks are having none of it. (more)

Is the Chinese Stock Market A Bubble That's Ready To Pop? 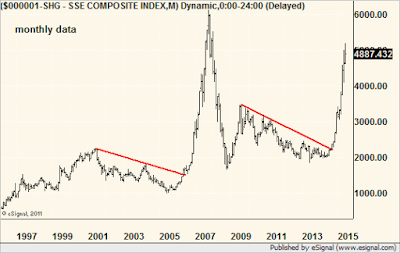 When it comes to stock markets, China's sure marches to the beat of its own drum.
The Shanghai Composite gained 145% in the past year, compared to about 7% for the S&P 500. Now, though, things may be unraveling in China -- and given what happened there just a few years ago, it is not likely to be pretty.
In the chart above, we can see the recent nearly vertical rise in the Chinese market after a slow, multiyear drift lower. (more)

iDreamSky Technology Limited, through its subsidiaries, licenses and operates single player mobile games and mobile online games in the People’s Republic of China. The company operates casual games, such as Temple Run and Subway Surfers endless running games; Three Kingdoms of Fruits, a role-playing game; and Fruit Ninja, a reflex game, as well as racing, shooting, puzzle, and other genres of the game. It also licenses and operates mid- and hardcore mobile games, including Fire over Sky and Three Swordsmen role-playing games; and Story of Beauty, a card game, as well as action role-playing games, strategy games, and action fighting games. The company distributes games through in-game cross promotions, self-operated iDreamSky Game Center, and uu.cc Website, as well as through its proprietary distribution channels and third-party channels, such as app stores and device pre-installations.
Take a look at the 1-year chart of iDreamSky (NASDAQ: DSKY) below with the added notations: After DSKY broke its $15 support (red) in January the stock fell all the way down to $7. From there DSKY has rallied over 100 percent, while also forming a key level at $12 (green). With the stock sandwiched in between those levels DSKY should provide a solid trading opportunity one way or another.

The Tale of the Tape: DSKY has a key levels at $12 and $15. A trader could enter a long position on either a pullback to $12, or a break above $15, with a stop placed under the level of entry. However, if the stock were to break back below $12, a short trade could be made instead.
Please share this article
at 12:03 AM No comments: Links to this post