Looking at a short term chart it sure looks like we are forming a double top here (see chart below). If so that could take us to at least the lows of early Jan. Time will tell. The weakness in the trading has been mentioned before, it still is there. We need a strong move into new highs to overcome.

The long term indicators continue to be in their positive territories but they do seem to be weakening. Gold remains above its positive sloping long term moving average line although with the price in a basic lateral trend and the moving average sloping upward the two are closing the gap. It will still be some time before the gap is closed but that's the direction things are headed at the present time. The long term momentum indicator remains in its positive zone but moving sideways with a slight negative bias. On Friday it once more dropped below its slightly negative sloping trigger line. As for the volume indicator, it is still positive but has started to show weakness lately. It remains above its positive trigger line. At market tops one should not put too much emphasis on a positive volume indicator. Too often the volume indicator is a lagging indicator at tops. It's the negative volume indicators at market tops that mean something and that one should really pay attention to. For now the long term rating remainsBULLISH.

We’ve had a few up and down reversals in the intermediate term over the past few months. For now we are in positive territory but for how long? I’ve mentioned that short term potential double top that may be in the formative stage. If completed it should take gold to its previous Jan low. At that point we then just might have an intermediate term double top that if verified by a move below the Jan low could take us all the way back to the low of last July, to about the $1170 area. But that’s getting way ahead of ourselves, let’s take things one at a time.

Shown on the chart are three up trend lines, two solid and one dashed. They form my FAN PRINCIPLE trend lines for a bearish decelerating FAN. The third line for now is just a guess as the action has not gone that far. For those who are new to these commentaries or have forgotten, we often get a series of trend lines that form a fan. There are many different texts that define their view as to what these fans signify, if anything. I have a simple criteria. For a bearish decelerating fan (or its opposite, a decelerating bullish fan) the breaking of the first FAN trend line is usually a none event as far as the FAN PRINCIPLE is concerned. It could by itself be a trend reversal but that’s another story. The breaking of the second FAN trend line is the reversal signal with the breaking of the third FAN trend line as confirmation. I have no real criteria as to how far the reversal move should go but a move back to the apex point is as good as any. It is also not unusual for the action to get trapped between FAN trend lines which then act as support and resistance lines. Based upon the time it took this pattern to form I would call it an intermediate term pattern. 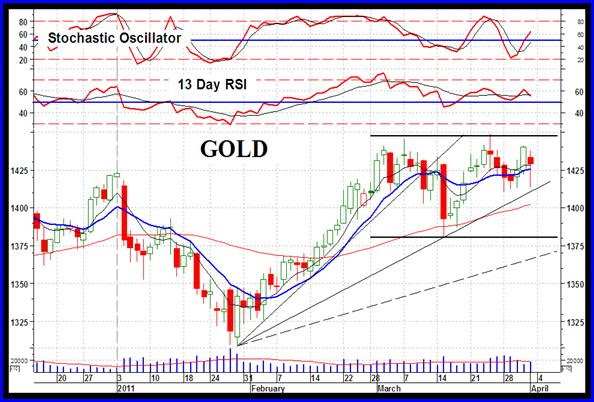 During a lateral trend as we have had over the past few weeks the indicators get all muddled up. They go positive one day and negative the next. As of the Friday close gold is still in a lateral trend. However, it had closed above its positive short term moving average line. The momentum indicator is sliding just above its neutral line but on Friday it once more dropped below its trigger line. The line has likewise turned downward. As for the daily volume activity, that would also be negative. When compared to the average 15 day volume line we see that the better days were days of negative gold price moves, not good. However, from the indicators we are still BULLISH as far as the short term is concerned. It looks like the $1410 level is one to watch out for. The short term bull is confirmed by the very short term moving average line which remains above the intermediate term line. 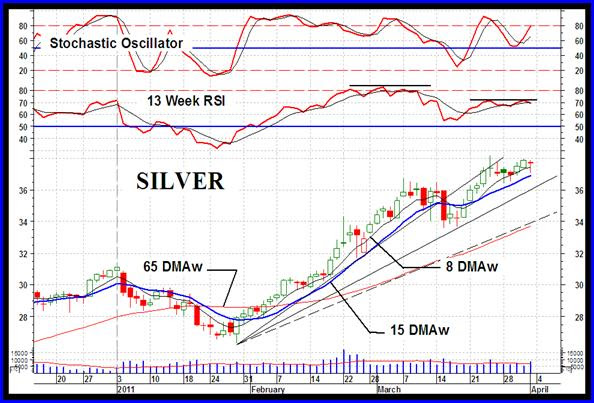 When looking at what silver is doing we most often compare it to the performance of gold. Here, with the silver chart, we have a direct comparison on the short term activity of both. The first thing that jumps out at you is that the price performance of silver seems to be somewhat stronger than the price performance of gold (see previous chart). That seems to be the only major difference in the two charts. The short term momentum indicator is giving us a negative divergence which seems to suggest that the better price move may not be all that credible. We have a potential bearish decelerating FAN trend lines same as gold. The daily volume action is not all that impressive although the volume indicator (not shown) is still quite positive. The price to watch here is the $36.50 level. A close below there would break below a short term support, below the short term moving average line AND below the second FAN trend line for a bear signal. Otherwise, at this point in time all three time periods are still giving us aBULLISH rating.

Checking out the performance of the gold and silver stocks this past week we get a different picture if you go to the major North American Indices versus the Merv’s Indices. The North American Indices were mostly slightly on the positive side while the Merv’s Indices were mostly slightly on the negative side. Looking at the currency performance table (not shown in most commentaries) this slight difference can be explained by the difference in currency performance between the U.S. $ and the CDN $.

Starting to be a concern lately is the performance of my Penny Arcade Index. Once more it was on the down side and even adjusting for currency differences would still be on the negative side. It is clearly in an intermediate term bear market with the intermediate term momentum indicator just about to go into its negative zone for the first time since it went into the positive zone in Jan of 2009. The Index needs to turn around fast or the momentum move into the negative zone will take place. It should be noted that the Table of Technical Information and Ratings shown here at the end of each commentary uses slightly more aggressive indicators than I use when I do my normal analysis so its ratings may be a week or so ahead of my visual analysis. This is most noticeable in the long term information and ratings. Visually the Index is still well above its positive sloping long term moving average line and the long term momentum indicator is still in its positive zone (although moving lower fast). I would be inclined to go with my visual analysis but for the slightly more aggressive investor, the table ratings are okay. Being slightly more aggressive the table ratings give you a reversal notice ahead of the visual analysis BUT this comes with a price, that of being somewhat more susceptible to the whip-saw effect of false reversal notice.

The importance I place on my Penny Arcade Index, as long term readers may remember, is that during a major top reversal the speculative and gambling stocks get hit first and provide an advance warning of the up coming reversal of the overall universe of stocks. We are starting to get just that kind of warning although it still needs more work.