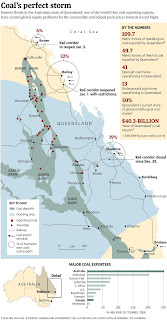 Rising coal prices are set to spike at least 20 per cent higher because of supply shortages due to severe flooding in Australia, adding cost pressures to the steel industry that could ripple widely through the economy.

Some industry watchers believe the effects of the supply squeeze will be felt through this year and into 2012, though analysts and officials in the coal and steel-making business say the toll cannot be precisely quantified yet, with mines in Australia still under water.

Australia supplies about half of the metallurgical coal used in steel making. The severe supply disruption has been a boon for Canadian producers. Shares of three major Canadian coal companies hit all-time highs on Tuesday on the Toronto Stock Exchange, led by Teck (TCK.B-T62.841.051.70%) which rose 1.7 per cent and has more than doubled in the past half year. Western Coal (WTN-T12.570.272.20%) rose 2.2 per cent and Grande Cache (GCE-T10.990.524.97%) climbed 5 per cent.

Spot prices for metallurgical coal – also known as coking coal – have risen to about $250 (U.S.) a tonne, up from current negotiated contract prices of about $225. Several analysts on Tuesday said the price could reach or surpass $300, the level to which the price spiked in 2008 during the commodity frenzy of that year and similar flooding in Australia. (more)