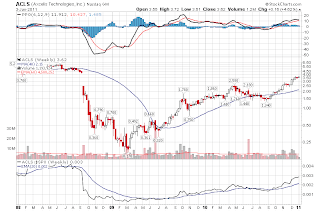 Given the substantial move of equities over the past two years, traders will likely become more selective in 2011 and focus on those companies that can grow significantly faster than the rest of the market. While there are a multitude of names poised to show strong growth in 2011, many have already seen their stocks move 300-400% over the past 18 months. APKT, FFIV, NFLX and RVBD are some examples, to name a few. As such, we have chosen to focus on ten companies poised for outsized growth, all of which could potentially double over the next year. Admittedly, the stocks of these companies have all recently doubled in the past few months. But it is important to keep in mind that a stock must first rise 100% before it is able to extend its move to 300-400%. As trend-traders, our goal is to be positioned for the next 100% move higher in some of these names. While the reality is they will not all go on to become big winners, if we are right about just two or three of these names, we will be off to a very good start in 2011. Here is our list:

Axcelis Technologies Inc. (ACLS): To understand our bullishness on semi-equipment maker, Axcelis, look no further than the company’s business model. As gross margins scale to the 41% level next year, new investors should warm further to the company’s shares as they realize the tremendous earnings leverage that will be achieved with these margins. Currently, estimates for 2011 call for ACLS to earn $0.24 a share on $368M in revenues. 2012 estimates have recently been increased to $0.50 on $407 Million in revenues. Based on the company’s 1.5 book-to-bill ratio last quarter and a spate of recently announced orders the past few months, we feel ACLS could report 2012’s estimates by next year alone. If all goes right, peak cycle estimates for 2012 could eventually trend toward $475M in revenues and $0.65 in earnings. Add in the $0.50 in cash on its balance sheet to the peak earnings potential of $0.65, and place a 10 P/E multiple on these numbers, you get a double by the end of next year. We remain buyers of ACLS on pullbacks to $3.30-$3.40. (more)