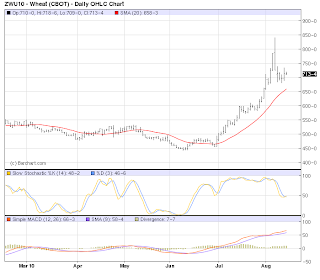 Wheat is trading higher today, positioning to snap a 4-day profit-taking decline. The US Dept of Agriculture provided updated its forecasts for grain production. It now forecasts a global harvest for year than began June 1 at 645.7 mln metric tons, down from 661.1 mln metric ton forecast last year and 680 mln metric tons in the year that just ended. It also cut its forecast for the inventory that will be on hand at the end of the current planting year next May.

The USDA anticipates the harvest in Russia and Ukraine will be 15% lower and Kazakhstan’s harvest will be cut by 18%. The EU’s harvest forecast was cut 3%. Following Russia’s export ban, there is talk that the Ukraine may also be announcing caps on exports or an outright ban as well. On the other hand, the USDA lifted the estimated size of the US harvest to 2.265 bln bushels from 2.21 bln estimated last month. Initially we thought that Canada could help fill the shortage, but the plains have been very wet and this is thought to be jeopardizing the size of their crop, while too dry of weather in western Australia and Argentina may threat the current crops.

We have re-worked our correlation matrix. Wheat had fallen to a 3-year low in early June. Since then, of the wide number of currencies we examined, the euro and the Norwegian krone is most correlated–with an R2 of just below 0.27. The Argentina peso, Canadian dollar and Brazilian real have R2s between 0.20 and 0.25. The Australian and New Zealand dollars, Chilean peso, and sterling have R2s in the high teens. (more)