Macy’s, Inc., together with its subsidiaries, operates stores and Internet Websites in the United States. Its stores and Websites sell a range of merchandise, including apparel and accessories for men, women, and children; cosmetics; home furnishings; and other consumer goods. The company also operates Bloomingdale’s Outlet stores that offer a range of apparel and accessories, including women’s ready-to-wear, fashion accessories, jewelry, handbags, and intimate apparel, as well as men’s, children’s, and women’s shoes. As of February 2014, it operated approximately 840 stores under the Macy’s and Bloomingdale’s names in 45 states of the United States, the District of Columbia, Guam, and Puerto Rico, as well as the macys.com and bloomingdales.com Websites; and 13 Bloomingdale’s Outlet stores.
Take a look at the 1-year chart of Macy’s (NYSE: M) below with added notations: 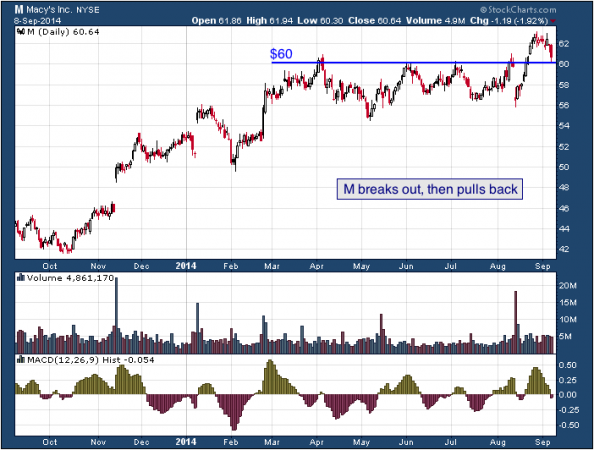 M had been trending mostly sideways from February until mid-August. The stock had also created a relatively clear level of resistance at that $60 (blue) during that period of time, and that level was also a 52-week high resistance. The break through that resistance led to a run up to $63. Pullbacks to $60 should provide support, while a break below $60 could signal the end of the run.

The Tale of the Tape: M broke out to a new 52-week high. A long trade could be made near $60 with a stop placed below that level. A break back below $60 would negate the forecast for a continued move higher.