AngloGold Ashanti Limited operates as a gold mining and exploration company. It also produces silver, uranium oxide, and sulphuric acid as by-products. The company has 21 operations comprising open-pit and underground mines, and surface metallurgical plants in the Americas, South Africa, Continental Africa, and Australasia. As of December 31, 2013, it had proven and probable ore reserves of approximately 67.9 million ounces. AngloGold Ashanti Limited was founded in 1944 and is headquartered in Johannesburg, South Africa.
To review Anglo’s stock, please take a look at the 1-year chart of AU (AngloGold Ashanti Limited) below with my added notations: 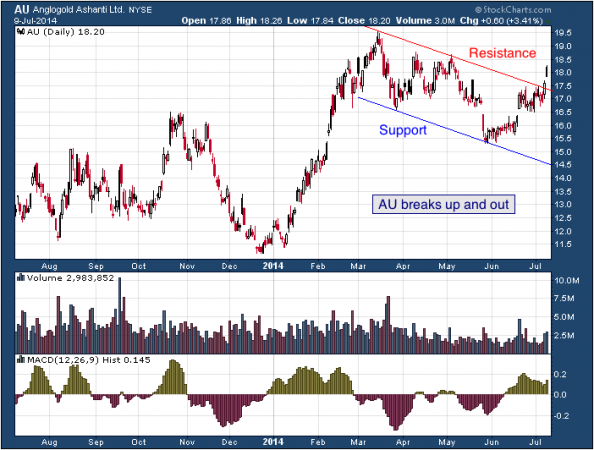 AU had formed a relatively clear down-channel chart pattern over the last (4) months. A channel is formed through the combination of a trend line support that runs parallel to a trend line resistance. When it comes to channels, any (3) points can start the channel, but a 4th point or more confirms it. You can see that AU has several points of channel resistance and support. Earlier this week the stock broke through its channel resistance.

The Tale of the Tape: AU broke through the resistance of its down channel. A long trade could be entered on a pullback down near the prior channel resistance. A close back inside the channel would be a bearish development instead.
Please share this article
at 12:03 AM