Is A Real Estate Crash Canada’s Next Black Swan? 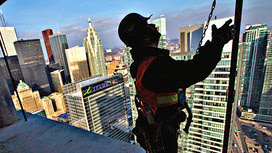 Robert MacFarlane, a long-time crane operator, surveys his empire from the top of one of Toronto’s flashy new apartment buildings.

“I can see more than 50 tower cranes,” said Mr MacFarlane, whose bird's-eye photography from the country’s tallest crane has gained him online notoriety as interest in Toronto’s property sector escalates.

These cranes – which can offer clues to bubble-like conditions – emerged in response to lofty demand for condominiums from investors and homebuyers taking advantage of Canada’s ultra-low interest rates.

“I’m even considering a condo investment myself,” Mr MacFarlane added.

But as home prices rally and construction projects proliferate – particularly in Toronto, Montreal and Vancouver – industry analysts say the country’s property sector is perched precariously at its peak.

David Madani, economist at Capital Economics, believes the nation is on the verge “of what will prove to be a prolonged correction”.

“Canada’s housing market exhibits many of the symptoms that preceded disruptive housing downturns in other developed economies, namely overbuilding, overvaluation and excessive household debt,” he adds.

Mr Madani’s comments chime with a chorus of policy makers, rating agencies and hedge fund managers who have warned of the risks posed by Canada’s overheated housing market.

Alongside Norway and New Zealand, Canada’s overvalued property sector is most vulnerable to a price correction, according to a recent OECD report. It is especially at risk if borrowing costs rise or income growth slows.

In its latest monetary policy report, the Bank of Canada, the nation’s central bank, noted: “The elevated level of household debt and stretched valuations in some segments of the housing market remain an important downside risk to the Canadian economy.”

The riskiest mortgages are guaranteed by taxpayers through the Canada Mortgage and Housing Corporation, somewhat insulating the financial sector from the sort of meltdown endured by Wall Street in 2007 and 2008. But a collapse in home sales and prices would be a serious blow to consumer spending and the construction industry that employs 7 per cent of Canada’s workforce.

Under the watch of Mark Carney, the former Bank of Canada governor who now holds the same job at the Bank of England, the country weathered the global financial crisis better than many industrialised peers. It was helped by a resilient housing sector, a strong banking system and tighter lending standards.

But the flipside of a low interest rate policy designed to buttress the economy has meant that household debt levels have hit record highs as homebuyers stretched themselves to jump into the housing market. That in turn propelled demand and prices.

The government tightened mortgage rules last year in an attempt to cool demand, but while momentum slowed a little, debt accumulation did not.

Household debt has risen to 163 per cent of disposable income, according to Statistics Canada, while separate data show a quarter of Canadian households spend at least 30 per cent of their income on housing. This is close to the 1996 record when mortgage rates were substantially higher.

On a price-to-rent basis, which measures the profitability of owning a house, Canada’s house prices are more than 60 per cent higher than their long-term average, the OECD says.

Although Canada has so far defied a US-style property crash, recent surveys have raised alarm about parts of the market.

Year-to-date new home sales in the Greater Toronto Area – an area accounting for a fifth of Canada’s home building activity – are down by half from two years ago, according to the Building Industry and Land Development Association.

As existing construction projects in Toronto and elsewhere are completed, the pool of unsold properties will widen. Inventory levels are already above average in two-thirds of Canada’s housing markets, the Canadian Real Estate Association said.

Mr Madani forecasts a market correction in home prices over the next few years, predicting a 25 per cent drop.

But those that are bullish on the market point to resilient regional data. October sales of existing homes rose 38 per cent in Vancouver and 19 per cent in Toronto.

“It’s a mistake to think that what happened in the US will happen in Canada,” said Gregory Klump, CREA’s chief economist said. “There was a lowering of credit quality in the US that has not happened in Canada. If anything, over the past four years tightened mortgage regulations have successfully prevented a housing bubble.”

Mr MacFarlane too has yet to be convinced of an imminent slowdown. “In the past when things have slowed down, there has been a distinct ‘feeling’ from the boots on the ground perspective. I don’t really sense that right now.”

Even so, any strength now is not expected to last. The central bank says any continued upward momentum will exacerbate the problem, setting up the housing market for an even harder fall.