How To Invest: Learn To Spot The Double-Bottom Base

The double-bottom base reflects an investor's harshest emotions: crushing disappointment, capitulation and humiliation. If you can spot this pattern, you can add jubilation to that list.
A double-bottom base looks like a "W" with a slightly lower right side than left side. That second bottom should undercut the first.
Why? That's where the market makes a fool out of us, flush ing folks out of a perfectly good stock before making its bull run. 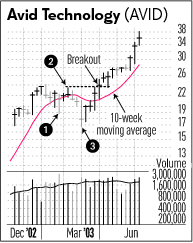 Here's what you need to see. First, the stock declines. Then it rebounds, but not as high as the point where the first decline started. This is where the feeling of hope surges that your stock is a winner.
Then it falls again. Many holders, losing patience with the stock, will bail out if it makes a new low. The next thing you know, it takes out that first bottom. So far all you have is a stock that's falling, and a lot of broken hearts.
But if the stock then reverses higher in increasing volume, you have the makings of a double bottom.
Crucially important, the apex of the "W" must stand above the 10-week moving average. It also must appear in the upper half of the entire structure.
If your double-bottom candidate fails to meet these two criteria, it's flawed. The all-important inflection point — the apex — is so low that any rush to buy would still be met by older longs grateful for a way out of a bad position.
Avid Technology (AVID) — a developer of software and hardware for digital movie production — built a classic in 2003. The first down leg appeared from Jan. 7 to Jan. 27, with the stock falling 22% to 18.76. (1)
The stock bounced to 23.46 by Feb. 11 (2) — above the 10-week line and, you'll see later, in the upper half of the entire yet-to-be-finished structure (although you don't know that yet).
Then came the second down leg, which took out the first by two full points and bottomed out March 7. (3) Other than an upside reversal with colossal volume, there's no reason to believe Avid would find any support at the second bottom's neighborhood. After all, it was sitting below the moving averages and as much as 31% below its 52-week peak.
Still, it started to rise. The stock showed significant volume on the upside. Still, you shouldn't get excited unless and until it takes out that apex price — 23.46 — plus a dime. As with all base breakouts, look for confirmation in the form of a volume surge.
Such confirmation didn't appear the first time Avid hit that apex, on March 26. The stock's feeble attempt fizzled.
But April 2 saw the stock soar 11% in double-paced trade (see a daily chart). That move proved to be the start of a run that lasted six months, and saw the stock rally 154% to as high as 59.77.