Portrait of the fiscal cliff

I included this chart of the US dollar index against a basket of global currencies in a presentation I did in Vancouver on the weekend. It helps put some big picture perspective on the US dollar and how its movements as the benchmark currency have impacted asset prices over the past 20 years. 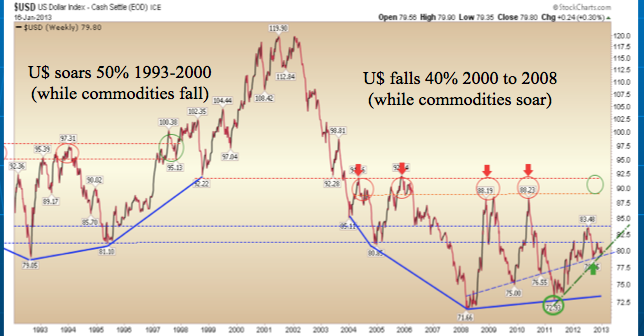 First of all, we can see the surge in strength during the 1990′s tech bubble where the US could do no wrong and the world fell in love with their technological innovation in computers and the internet. The US dollar strengthened 50% during this period peaking with global stock markets in 2000. During this period, commodities were under-loved, under-invested, and under-priced (given their inverse price moves to the Greenback). After the tech bubble burst, people came to experience the financial trauma of their over-optimism, and over-investment began to flow back out of US dollars. Then came the 2001 downturn and the Greenspan led Fed began its epic and misguided efforts to re-inflate risk appetite by slashing interest rates from 5.5% to 1% by 2002. Next came 9/11 and the Bush administration opted to slash tax rates and commit to 2 massive military initiatives in Iraq and then Afghanistan while at the same time increasing spending in other areas. This was the real fiscal cliff, when spending went parabolic while tax revenues plummeted thanks to the weaker economy and lower tax collection. These were also the catalysts which drove the over-valued US dollar from its over-exuberant peak in 2000 through a 40% decline by 2008. Not surprisingly, commodities soared through this period, as prices moved from deeply under-valued in 2000 to deeply over-valued by 2008.

As the US dollar bounced off the depths of negative sentiment in 2008, over-valued stock and commodity prices tanked in sequence. Waves of government and Central Bank stimulus managed to force a cyclical bounce for risk markets from 2009 to 2011, and then the US dollar turned back up just as very few people expected it.

The precious metals and commodities crowd that had been decimated in 2008 found renewed hope in the speculative resurgence in liquidity fueled trading and stockpiling into 2011. They naturally believed they had been given reprieve and went back to over-confident bets just as the world economy turned back down. Since then the resource and mining sector has been hammered afresh as captured in this next chart of the Canadian Venture Exchange. 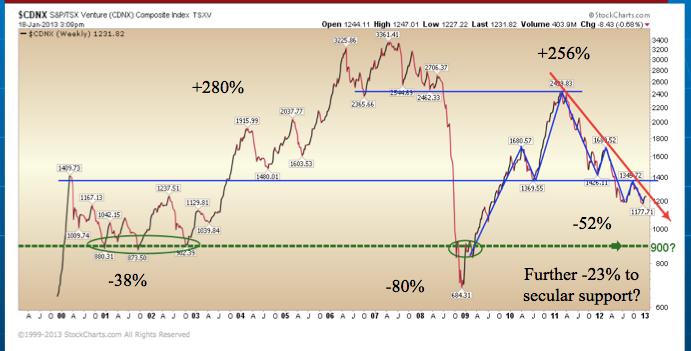 Now down some 63% from the 2008 bubble and some 50% from the 2011 rebound, the good news is that the resource sector has been through a large correction and while a further 20%+ downside is needed to retest its secular support, the space is surely moving closer to reasonable value now than it was in recent peaks. The bad news, is that as in other bubble aftermaths, it is likely that some 70%+ of companies in the sector are likely to go out of business and disappear in one way and another over the next couple of years. Investment success as always, will depend on one’s ability to determine who will be left standing and what price to pay for the new lower growth environment. As massive, reckless leverage continues to move out of this sector, investors may well do best to let the players settle a little further before stepping in.