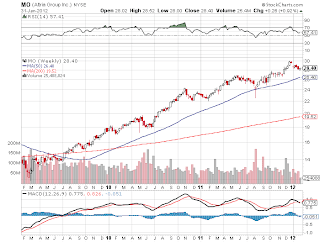 It's probably foolish to think that smoking will ever go away entirely. The health risks have long been decided, but people have their vices and smoking has long been among them. That said it seems like governments around the world are on the same page when it comes to reducing the number of places people can smoke, and increasing the cost of doing so. That suggests an ever-shrinking window for Altria (NYSE:MO), but investors can likely wring a great deal of cash flow for many years to come.

Year-End Results Come in as Expected
Altria's earnings are often a mess, but the company's fundamental performance was more or less in line with expectations. Revenue net of excise tax rose 5%, as weaker cigarette volumes were offset by better performance in smokeless tobacco.

Still Fighting for Share
The tobacco "pie" isn't getting any larger in the United States, so maintaining brands is critical. To that end, Altria is having mixed success. The 3% adjusted decline in cigarette volume this quarter basically matched the industry, but key brand Marlboro's share slipped very slightly. Altria is still the 800-pound gorilla in the U.S., though, with roughly half the market and well more than Reynolds American (NYSE:RAI) and Lorrilard (NYSE:LO).

The story is a little different with smokeless tobacco, where Altria saw nearly 10% volume growth. As smoking becomes increasingly stigmatized, more and more smokers are shifting to smokeless tobacco. It's also not hurting Altria that the U.S. government is making it increasingly difficult to export smokeless tobacco into the country, leaving only very few companies like Swedish Match with the willingness and ability to compete.

Pushing for Growth
What can Altria do to make more money? Much is made of the price inelasticity of vice products like tobacco, but that's really not true. There's always a price-point where people cut back or switch brands.

At the same time, there's arguably not much slack left in the company from an operational perspective. That suggests to me, then, that the company's best option is to pressure its supply change - pushing on companies like Universal (NYSE:UVV) for better leaf tobacco pricing, and companies like Glatfelter (NYSE:GLT) for better pricing on filters and packaging.

The Bottom Line
For companies like Philip Morris International (NYSE:PM), British American Tobacco (AMEX:BTI) and Imperial Tobacco (OTCC:ITYBY) there's still some international growth potential as improving economic conditions allow smokers in emerging markets to upgrade their tobacco options. At the same time, a lot of emerging markets heavily regulate or product their markets, so it's not exactly a profitable free-for-all.

In many respects, Altria is like a royalty trust. There isn't going to be much market growth, but the company can reap a meaningful amount of earnings and cash over the coming decades, assuming that the federal government (whether through lawsuits or health regulations) allows them to. That leaves Altria as a reasonable, though not particularly cheap, income play.