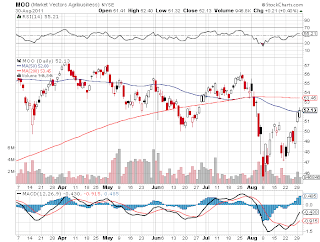 Many consumers have recently felt the effects of rising oil prices in their wallets. With turmoil continuing to rage in the Middle East, oil prices have been volatile. Funds like the United States Brent Oil (NYSE:BNO) have rallied in the face of higher prices. Analysts predict that this trend of higher oil prices could continue for awhile as the political situation in the Middle East remains in a quagmire. However, while consumers focus on the gas in their tanks, a potentially more serious problem is still brewing - rampant food inflation.

Biggest Increase
The United Nations Food and Agriculture Organization's (FAO) latest report showed that global food prices rose 39% in June versus June 2010. So far, consumers in the United States have not really felt the full effects of this rising food price inflation. Recent weather calamities such as a drought in Russia and flooding Australia, have disrupted harvests and helped push food prices higher. In addition, long term demand from emerging nations for new sources of food and biofuels is putting continued pressure on food prices. The USDA estimates that throughout 2011, its all-food CPI will increase 3 to 4%, with food at home (grocery store) prices forecast to rise 3.5 to 4.5%. The USDA forecasts are based on strengthening global food demand, mostly in the developing world.

Emerging World Demand
That demand in the emerging world is growing quite rapidly. The FAO projects that global populations will increase nearly 11% by 2020 and 20% by 2030. Analysts at Goldman Sachs expect the global middle class to expand considerably over the same time frame, to over 3.5 billion by 2030. Worldwide demand for beef is at all time highs, with beef exports surging by 19% in 2010. Wheat imports in China will need to rise by more than 30% this year. Last year, China was a net importer of corn for the first time in 14 years. Unlike developed nations such as the United States, citizens of emerging nations can spend as much as 40 to 50% of their income on food.

Sowing the Seeds
With the trends pointing in the favorable direction, investing in agriculture has been a big hit. While many agricultural commodity prices have climbed already, investors with a long term focus should consider adding the sector to a portfolio. Both the Market Vectors Agribusiness ETF (NYSE:MOO) and the PowerShares Global Agriculture (Nasdaq:PAGG) offer broad global exposure to some of agriculture's biggest companies like Deere (NYSE:DE) and fertilizer maker Agrium (NYSE:AGU). These two funds can form a great base in sector. However, there are other ways to play the growth in Ag.

The agricultural sector accounts for a big portion of total economic activity in both New Zealand and Argentina. Argentina is the second largest corn exporter and third largest soy exporter in the world. The nation is also top beef and lamb producer. New Zealand has seen its milk exports to China rise more than five times since 2008 as rising incomes increase demand. Both the iShares MSCI New Zealand (Nasdaq:ENZL) and Global X FTSE Argentina 20 ETF (NYSE:ARGT) should do well as the Ag sector grows.

Higher beef prices may be here for awhile as it takes two to three years for a cattle rancher to substantially increase herd. The U.S. currently has the smallest cattle herd since the 1950s, even though exports are surging. The iPath DJ-UBS Livestock ETN (NYSE:COW) and UBS E-TRACS CMCI Livestock ETN (NYSE:UBC) allow investors to bet on the prices of livestock.

Bottom Line
With global demand surging, higher food prices are here to stay. Investors with long term timelines should consider the sector. Growing populations, coupled with the newly minted middle classes desire for new sources of protein makes the sector a great place to be for the next few years. Funds like the new IQ Global Agribusiness Small Cap (Nasdaq:CROP) should continue to do well as global populations increase exponentially.