Housing’s Next Leg Down And QE3

That US home prices are once again trending down is no secret. But just how bad things are likely to get is not yet well understood. Consider this from the Atlantic’s Daniel Indiviglio:

The following chart created by Laurie Goodman, a housing market expert at Amherst Securities, shows the ominous rise of shadow foreclosure inventory. It was part of a slide in a presentation she recently gave at an event last week at the American Enterprise Institute on how the Dodd-Frank financial regulation bill is stifling mortgage credit. 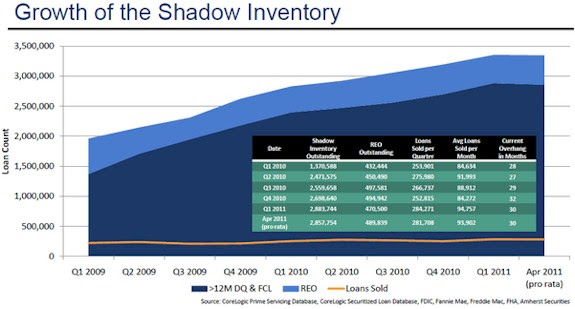 This chart answers the question: what’s happening to the homes of all those defaulted borrowers that we hear about? Many of those properties are a part of so-called shadow inventory. This is the sort of limbo between when a home’s loan defaults and when the property is put on the market for purchase.

The increase shown above is staggering. The shaded area shows mortgages more than 12 months delinquent or in foreclosure (darker blue) and those seized by the bank (lighter blue). The sum has risen from just below 2 million in early 2009 to 3.35 million in April 2011. That’s an increase of more than 67.5% over this period of about two years.

Also interesting: despite accumulating more defaulted properties, banks are very careful not to increase the number of loans sold very much. Loans sold has been very steady from 80,000 to 95,000 over this period. So recently prices have begun declining again even though the inventory for homes available for sale is being kept relatively low compared to the number that should actually be available to buyers.

`According to Goodman’s presentation, even though homes sold are only about 90,000 per month, inventory is growing by around 60,000 per month. So the homes sold each month would have to increase by two-thirds just to keep up with the growing inventory — not to begin to cut the 3.35 million homes in the shadows. To conjure up enough demand to meet 150,000 sales instead of just 90,000, home prices would almost certainly have to fall faster.

Wow. Housing is heading back into a depression even though banks are keeping millions of foreclosed houses off the market. Bank auditors won’t let them hold these depreciating assets indefinitely, so in the coming year the trend will reverse, as banks are forced to clear out their real estate. That’s a ton of new listings at a time when even current listings aren’t selling. So unless something radical happens (a government subsidy aimed directly at housing, for instance), the next leg down in prices should be epic.

This will cause consumers to spend less as their main investment turns out to be an even bigger loser than they currently fear. So a housing crash becomes a broader recession.

To my knowledge no one has tried to calculate what kinds of losses banks are sitting on. So let’s speculate that the average foreclosed house is worth $20,000 less than its mortgage (a conservative guess since most California houses are underwater by way more than that). 3.5 million times $20,000 blows a $70 billion hole in bank balance sheets that will have to come to light sometime soon.

Since the government’s reason for existing these days is to feed the banks, losses of this magnitude will pretty much guarantee a response. If QE3 hasn’t already happened, this will bring it on.