James Dines: Uranium is the “Buy of a Lifetime”

Energy guru James Dines thinks that uranium is a screaming buy right now – the buy of a lifetime, in fact. Here’s his analysis, which he shared with Financial Sense’s Jim Puplava.

I think it’s one of the great profit opportunities available right now and I’ll explain why. The announcement that Germany’s going to close down all 17 of their nuclear facilities in the next 11 years made the biggest headlines that you could imagine. It was almost semi-hysterical. It ignited the greens to a glorious glee and, to be honest, seven of those 17 facilities are old and they should have been closed down long ago but in terms of them getting out of nuclear power the headlines almost mentioned Switzerland and Italy getting away from nuclear power and Japan of course. But the press didn’t even seem to mention or even notice that at the same time the Saudi’s announced that they’re going to build 16 nuclear plants. Also, there’s no mention of India’s plans. They’ve got over 20 percent of its population that has no electricity at all and has just announced an eight fold—that’s eight times the expansion of their nuclear in the next ten years. That’s not to mention more atomic power announcements from Taiwan and Brazil and the Ukraine, even Slovenia and Poland. So there is a massive worldwide movement toward nuclear power but the prejudice by the world against nuclear is profound. That’s when you can make money when you get in touch with reality and you have a chance to buy some of these stocks that are beaten down.

When the anti-nuclear—cheering the end of nuclear dies down somebody’s going to ask what might replace it—nuclear power—dirty coal, natural gas dependent on Russia’s good will and vulnerable to cyclically higher gas prices, oil possibly cut back by the current revolutionary unrest by oil producers, and do those who answer that wind power could replace nuclear—do they know what rare earths are? That you need 700 pounds for each turbine and around 95 percent of the rare earths come from China. They just this week announced—China—that the Mi Ti just announced that they’re building their own strategic stockpile of rare earths so even a trickle of the five percent might get cut off. You know the choice is not uranium, is not nuclear or wind turbines, its uranium plus shivering in the dark.

I know that many of our readers also like uranium (here’s the article I wrote for Hard Assets Investor on uranium – pre-crash, of course!)

Uranium stocks are continuing to work their way lower – URA’s chart is not a pretty one: 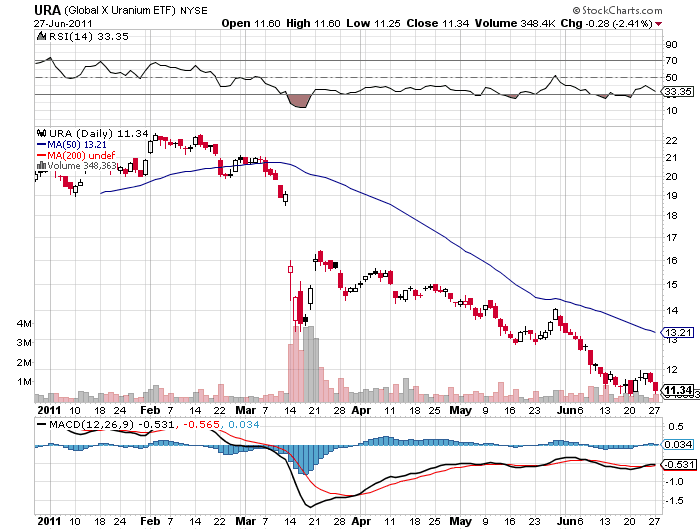 Are uranium stocks finally starting to form a bottom? It’s a bit too early to tell for sure, but if your holding period is multiple years, an accumulation of uranium stocks at these prices sure looks interesting.