Silver Continues to Outpace Gold.
Once again silver is out pacing gold in the weekly performance. Is it too much of a good thing? Only time will tell. Lower gold volume versus higher silver volume seems to suggest the betting is really on silver. I guess the global environment is still not all that great as the gold investors and speculators continue to send gold into new high ground. It will be interesting to note who has the more power behind the move, investors or speculators. We’ll probably know that on the next serious correction. A serious correction will end with gold eventually moving into even higher highs if the investors have the upper hand. If the speculators have the upper hand gold would continue declining into a bear market move. So, we’ll just have to wait until that time, which is not yet here.

The weekly action was down and up BUT on low relative volume. Gold action volume has remained below its 15 day average even as the average has been steadily declining. Over the past 15 days there were only three days where volume exceeded the 15 day average and those were on down price movement days. This is what professionals mean when they say the price is moving up higher on a wall of worry. No one seems to be too enthusiastic about the move but on the other hand no one wants to be left behind either.

Gold continues to move above its short term moving average line and the line slope remains in a positive slope. The momentum indicator remains in its positive zone and is once more above its positive trigger line. It is just about to enter its overbought zone so do not be surprised if we get some lateral or negative action over the next short period. The daily volume action has already been mentioned. The upside enthusiasm seems to be somewhat suspect. Anyway, all told the short term rating remains BULLISH. This is confirmed by the very short term moving average line remaining above the short term line.

As for the immediate direction of least resistance, that seems to be to the up side but one should be on guard for some lateral or negative motion. Gold is once more getting quite far above its short term trend line and one might expect a move back towards the trend. The Stochastic Oscillator is positive and not yet in an overbought position but that could be just a day or two of more upside action. I’ll go with the up side for another day or two but the lateral or downside does not look like it’s far away. 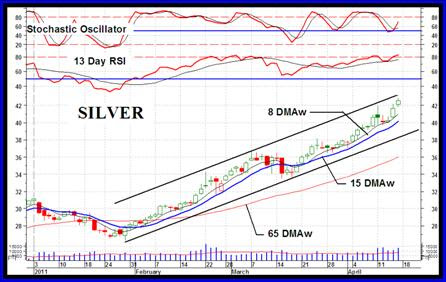 Silver continues to out perform gold but with the Friday boost into new highs it looks like the thrust is just about ready to take a breather. The latest action is butting up against the upper resistance trend line of a three month channel and that means either a lateral move or a reaction back to the lower support. The intermediate term momentum indicator is entering its overbought zone which further suggests a possible rest or reaction ahead. However, a decisive break above the resistance line would mean a new more aggressive up trend and much, much higher prices.

For now everything is positive with the ratings for all three time periods being BULLISH.

Gold and silver up, stocks down. It looks like speculators have decided that the stocks have moved too high too fast and have started taking some profits. Declines were generally in the order of 3% to 4% with the Merv’s Spec-Gold Index taking the biggest hit at 7.0%. Of course, the speculative silver stocks have been the biggest beneficiaries over the past several weeks so a bigger decline during a bad week was no surprise.

I have been mentioning the potential negative divergences in the various Gold and Silver Indices. It looks like the reversals of trend may be coming due although one week does not make a reversal trend. We need a little more convincing than one week.