Is This Why Bill Gross Dumped Treasuries?

A couple of revealing charts from the Fed’s Flow of Funds data. Both show net flows into Treasuries by creditor type and the Federal Government’s borrowing during each quarter. Note, the quarterly data is annualized.

The first chart illustrates how QE2 flushed domestics out of Treasuries and effectively funded 63 percent of the budget deficit in Q4. The Treasury is prohibited from directly selling bonds to the central bank, but effectively finances the government through POMO.

Given that a large portion of the Rest of World category are central banks recycling BOP surpluses, it’s likely that 90 percent of the U.S. budget deficit in Q4 was funded by central banks. You think this may have anything to do with what’s happening in the commodity markets? That is, the central banks’ printing presses providing the fuel for speculators?

Furthermore, we ask: who is going to finance the U.S. budget deficit when QE2 ends, especially at a sub 3.50 percent 10-year Treasury rate? Bill Gross knows! 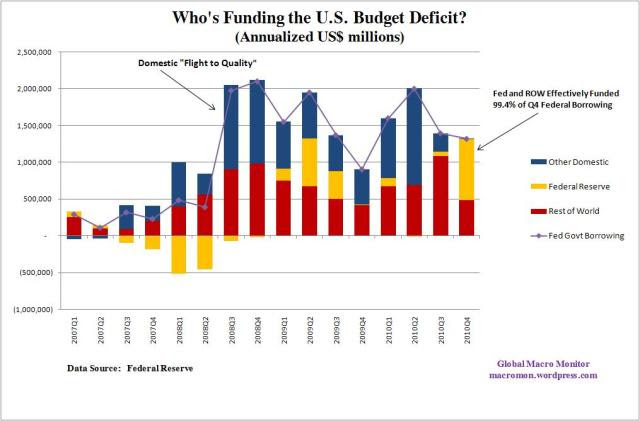 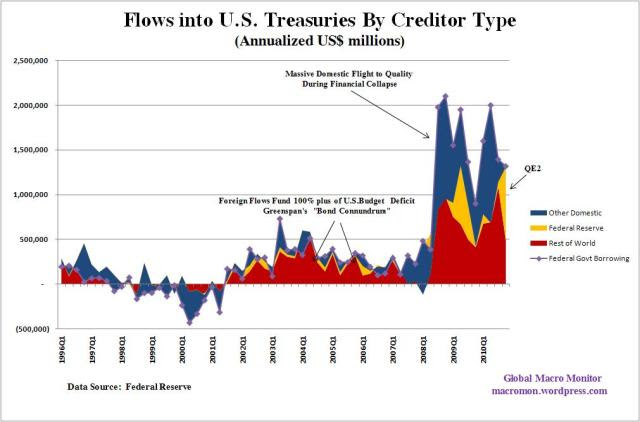