Mr. VIX’s Wild Ride What do the VIX rally and subsequent sell-off mean for traders? 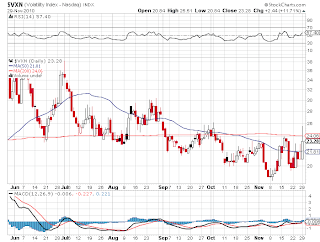 No sooner did we return from our turkey-induced coma than we found our beloved VIX commencing a pretty robust pop that began Friday, and to levels north of 23 no less.

Now I realize that may not sound like much, but it’s a two-month high and a break above the recent range of 18-22 that has bounded us since early October. What’s more, this puts the VIX more than 10% above its 10-day simple moving average (SMA) and above the standard 20,2 Bollinger band. In other words, the VIX actually was a tad overbought.

But this didn’t last long. By today’s close, the VIX had given it all back and then some. So was there any signal from this action?

There are two schools of thought regarding such a move in the VIX. A contrarian would point out that an overbought VIX equals an oversold market, and would look to fade it. That is, he would make some bullish market plays (or bearish VIX plays).

A “smart money” VIX adherent would say that the options market has spoken, and it expects rough waters ahead. He would consider a VIX pop an ominous sign of a market break ahead and look at bearish plays, or at least buy protection on a bullish portfolio.