Ireland: From rags to riches to rags 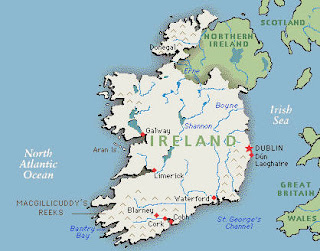 How the tiny island country managed to stage a meteoric economic rise only to fall in a similarly spectacular fashion.

The draw of what used to be called the "Celtic Tiger" or the "Celtic Miracle" was obvious: Relatively low taxes and regulations, combined with a fairly young, smart, and English-speaking workforce. And because the island state is a member of the European Union, this meant that selling goods and services to other European countries was relatively cheaper and easier.

But Ireland wasn't always so market friendly. And, on Sunday, as leaders dealing with the country's huge banking crisis were offered an $89.4 billion bailout from European nations to keep its economy afloat, it's worth reflecting on the country's long history of peaked ups and downs.

For most of the 20th century and even well into the late 1980s, Ireland's economy was pretty dismal, marked by high unemployment and huge government debts. It was viewed as a backwater economy, at least by European standards. The poor and hungry fled to America and other parts of the world, while much of its workforce worked jobs in agriculture. Unemployment in 1987 was at about 18%, while debt relative to GDP rose to 120%. There was even some talk of a possible default. (more)