Social Security: More going out than coming in 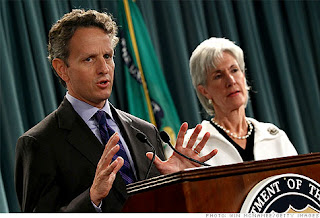 (CNNMoney.com) -- It's official: Social Security will reach its tipping point this year.

For the first time in nearly 30 years, the system will pay out more benefits than it receives in payroll taxes both this year and next, the government officials who oversee Social Security said on Thursday.

And while Social Security cash flow will likely head back into the black for a few years after that, starting in 2015 it looks to stay in the red for the long haul, the trustees said in their annual report.

"The improving economy is expected to result in rough balance between Social Security taxes and expenditures for several years before the retirement of the baby boom generation swells the beneficiary population and causes deficits to grow rapidly," Treasury Secretary Tim Geithner said. (more)