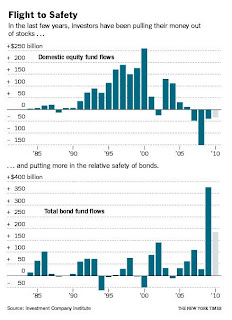 Investors withdrew a staggering $33.12 billion from domestic stock market mutual funds in the first seven months of this year, according to the Investment Company Institute, the mutual fund industry trade group. Now many are choosing investments they deem safer, like bonds.

If that pace continues, more money will be pulled out of these mutual funds in 2010 than in any year since the 1980s, with the exception of 2008, when the global financial crisis peaked.

Small investors are “losing their appetite for risk,” a Credit Suisse analyst, Doug Cliggott, said in a report to investors on Friday.

One of the phenomena of the last several decades has been the rise of the individual investor. As Americans have become more responsible for their own retirement, they have poured money into stocks with such faith that half of the country’s households now own shares directly or through mutual funds, which are by far the most popular way Americans invest in stocks. So the turnabout is striking. (more)