Entergy Corporation engages in the electric power production and retail electric distribution operations in the United States. It operates in two segments, Utility and Entergy Wholesale Commodities. The Utility segment generates, transmits, distributes, and sells electric power in portions of Arkansas, Mississippi, Texas, and Louisiana, including the City of New Orleans; and distributes natural gas. The Entergy Wholesale Commodities segment is engaged in the ownership, operation, and decommissioning of nuclear power plants located in the northern United States; sells the electric power to wholesale customers; offers services to other nuclear power plant owners; and owns interests in non-nuclear power plants that sell the electric power to wholesale customers.
Take a look at the 1-year chart of Entergy (NYSE: ETR) below with my added notations: 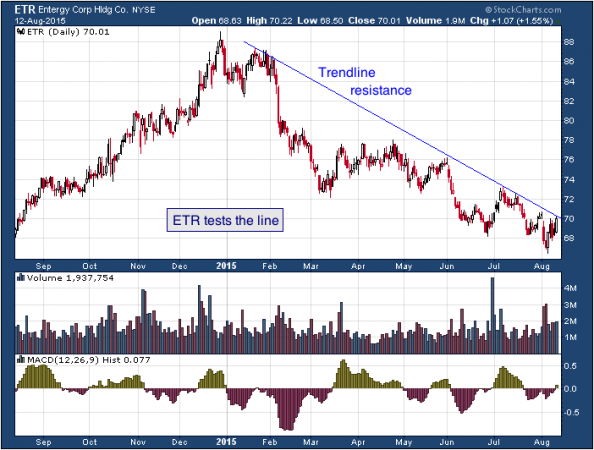 ETR has been trending lower for the past 8 months. Over that time, the stock has formed an important trend line of resistance (blue). Any (2) points can start a trend line, but it’s the 3rd test and beyond that confirm its importance. ETR obviously has an important trendline of resistance, which currently sits right around $70. A break above that line should mean higher prices, overall, for the stock.

The Tale of the Tape: ETR is currently stuck under a down trending resistance. A break above that resistance should mean higher prices for the stock, thus a long trade could be made. Short traders might look to enter a trade at the resistance.
at 12:03 AM