Range Resources Corporation, an independent natural gas, natural gas liquids (NGLs), and oil company, engages in the acquisition, exploration, and development of natural gas and oil properties in the United States. It holds interests in developed and undeveloped natural gas and oil leases in the Appalachian and Midcontinent regions. The company owns 7,582 net producing wells and approximately 1.4 million net acres under lease in the Appalachian region; and 653 net producing wells and approximately 383,000 net acres under lease in the Midcontinent region. In addition, it provides gas gathering and transportation from southwestern and northeastern Pennsylvania. The company sells natural gas to utilities, marketing and mid-stream companies, and industrial users; NGLs to natural gas processors or users of NGLs; and oil and condensate to crude oil processors, transporters, and refining and marketing companies.
Take a look at the 1-year chart of Range (NYSE: RRC) below with the added notations: 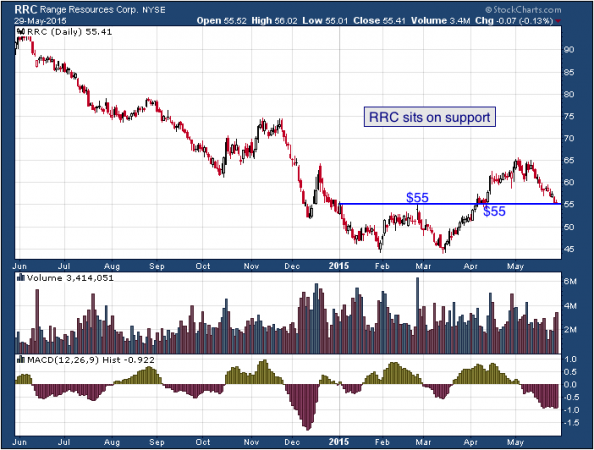 Like most energy names, RRC declined persistently into the beginning of the year. The stock then formed a double bottom price pattern, and then confirmed that pattern in April. The double bottom pattern, and confirmation, formed a $55 price level (blue) that has become important to the stock. Not only was the $55 mark the resistance point between the two bottoms, but that level was also support after the stock broke higher in April.

The Tale of the Tape: RRC has a key level at $55. A trader could enter a long position on a pullback down to $55 with a stop placed under the level. However, if the stock were to break back below $55, a short trade could be made instead.
Please share this article
at 12:03 AM