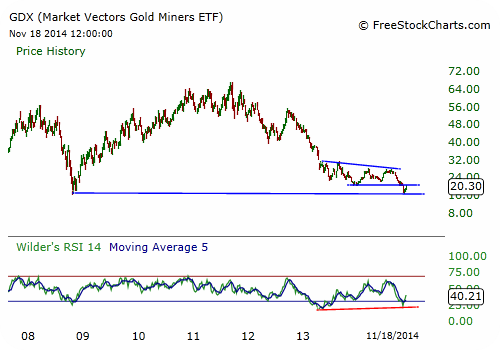 The price of gold has undergone a painful correction since topping out in August 2011, taking gold mining stocks down with it. But the recent wash-out may have set this group up for a rally in the remainder of the fourth quarter.
The topping pattern in gold mining stocks in 2010 and 2011 was a classic one. That is, when an asset moves meaningfully higher for an extended period of time, it often takes its time forming a top. You've probably heard the saying, "Tops are a process; bottoms are an event."
During that time, sentiment became excessively bullish, with investors seemingly believing gold would continue climbing forever. But, of course, nothing ever does. It was only a matter of time before muted price action ultimately led to a big trend break that completed the topping process.
The chart below displays the Market Vectors Gold Miners ETF (NYSE: GDX) in red relative to SPDR S&P 500 ETF (NYSE: SPY) in blue. At the 2011 top for gold miners, the spread between them and the broader market was wide, which was a clue to exercise caution in the sector.  (more)