Potash Corp. on the Verge of a Potential Double-Digit Breakdown: POT 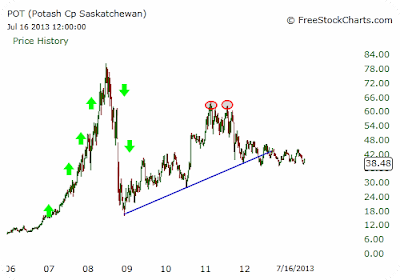 After rallying hard off a late 2008 low, agricultural chemicals firm Potash Corp. of Saskatchewan (NYSE: POT) found a serious top in early 2011, one that acted as the precursor to a choppy slide lower. Since the 2011 top, the stock has developed a series of lower highs. Notably, though, while it traced out lower highs, it continually failed to record a meaningful lower low.

POT has strong support around the $37 area. But if broken, the stock has the potential to quickly accelerate lower, finally recording the lower low that the bears are looking for.

Oh, I remember it well... Potash used to be the sexiest stock on the block back in late 2006 through the first half of 2008. But, as always happens, those chasing a stock with too steep a slope end up paying a steep price. For POT investors, this happened in 2008 as the stock cascaded lower. A climb that took roughly 20 months to complete took less than six months to erase/retrace 90%.

I discuss such patterns frequently because they offer some of the juiciest trading setups. Furthermore, they exemplify the herding nature of today's markets, driven by momentum and trend followers, and exacerbated by overly accommodative fiscal policies on the part of central banks. (more)