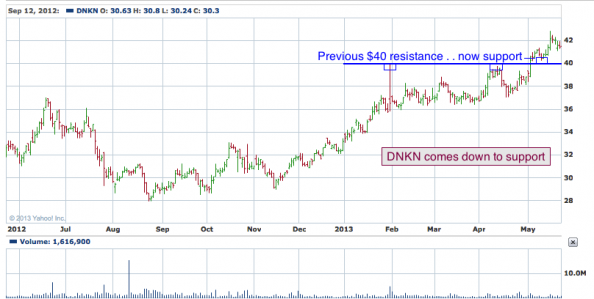 DNKN has been working its way slowly higher since bottoming at $28 in August. In January and April the stock hit $40 as resistance (blue), which was also a 52-week high resistance. After the stock finally pushed above that resistance in May, DNKN has already tested the $40 level as support once, and it appears to be pulling back down to it again.
The Tale of the Tape: DNKN broke out to a new 52-week high and now seems to be pulling back. A long trade could be made at $40 with a stop placed below that level. A break below $40 would negate the forecast for a continued move higher.
Please share this article
at 12:05 AM