Endeavour International Corporation, an independent oil and gas company, engages in the acquisition, development, exploration, and production of crude oil and natural gas. The company holds interest in the Alba, Bittern, and Enoch producing fields, as well as focuses on developing the Bacchus, Rochelle, and Columbus fields in the United Kingdom. It also has interests in various resource plays, including established areas, such as the Haynesville and Marcellus; and developing areas comprising Heath Shale oil play located in Montana, the United States. As of December 31, 2011, the company had estimated proved reserves of 22.7 million barrels of oil equivalent. Endeavour International Corporation was founded in 2000 and is based in Houston, Texas.

To review Endeavour's stock, please take a look at the 1-year chart of END (Endeavour International Corporation) below with my added notations: 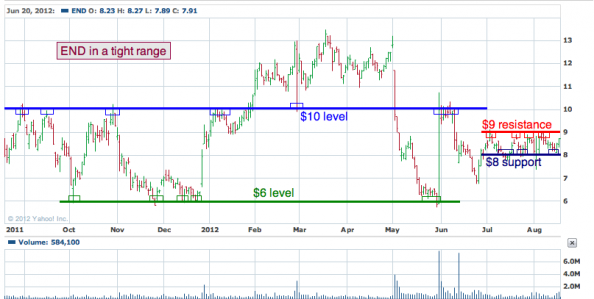 Over the last (2) months, END has been consolidating within a small Rectangle pattern. A Rectangle pattern forms when a stock gets stuck bouncing between a horizontal support and resistance. For END, the Rectangle pattern has formed a clear $9 resistance (red) and an $8 support (navy). Once END eventually breaks out of it's Rectangle, either the $10 or $6 level should come back into play.

The Tale of the Tape: END has formed a small Rectangle pattern. The possible long positions on the stock would be either on a pullback to $8, or on a break above $9. The ideal short opportunity would be on a break below $8, but a short could also be placed on a rally up to $9.
at 12:05 AM