Trade of the Decade 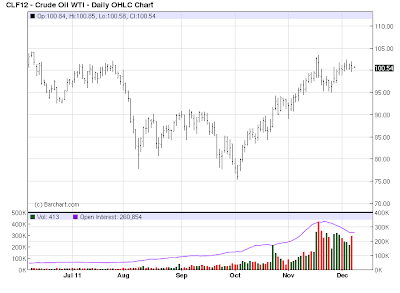 There are very few sure things in markets and investing. So I don't say this lightly: the price of a barrel of crude oil will average over $125 this decade.

Even if I'm wrong, you will want to explore my logic. Because even if I'm too bullish by $25 per barrel, there will still be lots of money made by smart traders exploiting the swings of the global energy megatrend in the 21st century.

My petroleum bullishness is based on three driving "mega forces" affecting global energy supply and demand. And my focus on these secular trends helps me pick winning stocks and ETFs in a half-dozen energy industries. Let's talk about the mega forces first, and then I'll tell you how to join me trading them.

Between the BRIC countries (Brazil, Russia, India and China) and dozens of other developing economies in Africa, Asia, South America and the Middle East; one could estimate that there are at least two billion people who aspire to the lifestyles of the West. These emerging middle class populations want the same jobs, housing, food, clothes and transportation we have.

As their governments and entrepreneurs oblige, this rapid development means lots of new urban infrastructure, including the roads, bridges, schools, hospitals and energy grids of any modern city. All of this means an incredible growth rate for energy demand. Plus, nearly every new automobile purchase in an emerging economy adds incrementally to oil consumption.

But don't take my amateur economist view on emerging economic development and the energy demands that go along. Here are some forecasts from the International Energy Agency (IEA) in its November 2011 "World Energy Outlook" report...

The last point is especially worth noting if you are an investor in "alternative" energy like solar and wind power. While global energy demand rises by over 30% in the next few decades, fossil fuels only drop off 6% in the total consumption pie.

You have no doubt heard of the theory of "peak oil". In case you've forgotten its premise, this is the idea that we have reached, or are soon about to cross, the threshold where the majority of known global oil reserves in the ground are at their maximum and will only decline going forward.

There is a heated debate going on right now as we speak between the "peak oilers" and those who say this is mere big oil -- and small oil for that matter – commercial and political propaganda. It's clear how lots of petroleum companies would benefit from the idea that there will be less supply going forward.

You already know I'm not an economist. You will also not be surprised to learn that I am not a geophysicist either. My expertise is clearly limited in the realm of "peak oil" theories.

But just like I can make broad-stroke conclusions about the European debt crisis that guide my trades (without knowing all the micro-economic details), I can also do some classical inductive reasoning about global oil supplies. Since a new oil field bigger than Saudi Arabia's hasn't been discovered in decades of exploration, it's not a stretch to assume we may be very close to the "peak".

The price of oil and the awareness of a peak in natural supplies have driven the recent explosion in shale exploration and production in the US. Natural gas E&P companies are using "fracking" technology to unlock oil and gas from their vast fields in the Eagle Ford shale in Texas and the Bakken shale in North Dakota. The environmental concerns about shale only reinforce the idea that we are much closer to "peak" petroleum than to finding our own Saudi Arabia in the US.

We all know that the problems in the Middle East are not going away any time soon. No matter how many peace negotiations, wars or regime changes, the ages-old conflict between religions and cultures will persist for decades more.

The recent bid keeping crude oil near $100, even with so much economic uncertainty over Europe, is likely due to tensions out of Iran. Why is Iran so important? Because it forms the east coast of the Strait of Hormuz, the world's most important oil "chokepoint" due to its daily flow of over 15 million barrels per day.

Nearly 20% of global consumption must pass from the Persian Gulf through the Strait of Hormuz to the Gulf of Oman and on to the Arabian Sea. A war involving Iran and disrupting that seaborne cargo could spike crude to over $125 very quickly.

I make no political or value judgments about the problems or solutions in these parts of the world. I am not smart enough to do so because these difficulties are as giant and complex as they are ancient.

But I think I am a good enough student of the markets to accept what I cannot control and simply to invest accordingly when faced with 3 unstoppable megatrends that will continue to interact and make energy "the trade of the decade".